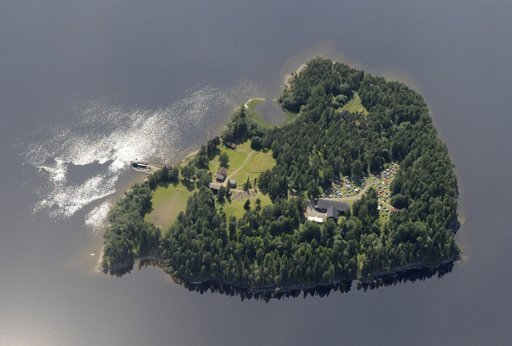 These days, you hear the words “terrorist attack”, and the first thing that comes to mind (at least to most Americans) is yet another wanton act of destruction by some cell of Islamic fundamentalists. I woke up this morning to a reminder that the thirst for the blood of innocents isn’t limited to whackjobs who think they’ve found a green light for slaughter in the Koran. As if we needed another reminder.

It began yesterday afternoon in Oslo, Norway, when a massive explosion detonated in a high-rise office building that housed the Norwegian prime minister’s office, killing seven people. A few hours later, a man disguised as a police officer killed 84 people on an idyllic Norwegian island called Utoya about 20 miles northwest of Oslo, shooting them one by one. At the time, the island was full of teenagers attending a Labour Party youth-wing retreat. (The Labour Party is currently in charge of Norway’s coalition government.) People fled into the lake surronding the island in an effort to escape, and police are still searching the water for bodies. Norway’s prime minister was scheduled to speak at the island youth retreat today. 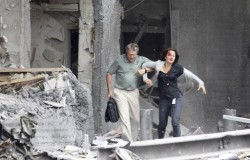 Police have arrested one suspect, who appears to be tied to both of these atrocities — a 32-year old, blonde, blue-eyed Norwegian named Anders Behring Breivik, a frequent poster on right-wing, Christian fundamentalist web sites.

Prime Minister Jens Stoltenberg told reporters, “This is out of comprehension. It’s a nightmare. It’s a nightmare for those who have been killed, for their mothers and fathers, family and friends.” He said that he had spent many summers on Utoya, calling it “my childhood paradise that yesterday was transformed into hell.”  (more after the jump . . .) 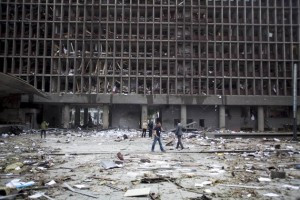 Quoting from an AP news report: “A 15-year-old camper named Elise who was on Utoya said she heard gunshots, but then saw a police officer and thought she was safe. Then he started shooting people right before her eyes. ‘I saw many dead people,’ said Elise, whose father didn’t want her to disclose her last name. ‘He first shot people on the island. Afterward he started shooting people in the water.’ Elise said she hid behind the same rock that the killer was standing on. ‘I could hear his breathing from the top of the rock,’ she said. She said it was impossible to say how many minutes passed while she was waiting for him to stop.

“At a hotel in the village of Sundvollen, where survivors of the shooting were taken, 21-year-old Dana Berzingi wore pants stained with blood. He said the fake police officer ordered people to come closer, then pulled weapons and ammunition from a bag and started shooting. Several victims ‘had pretended as if they were dead to survive,’ Berzingi said. But after shooting the victims with one gun, the gunman shot them again in the head with a shotgun, he said.” The island attack lasted 30 minutes before a SWAT team was able to get to the island.

There is no explaining what drives people, so filled with hate, to destroy the lives of innocent men, women, and children. It can’t be justified, it can’t be excused, it achieves nothing. It produces only horror, disgust, and sorrow. Our thoughts go out to the families of those who were slaughtered in these senseless acts.

20 Responses to “THE HORROR IN NORWAY”