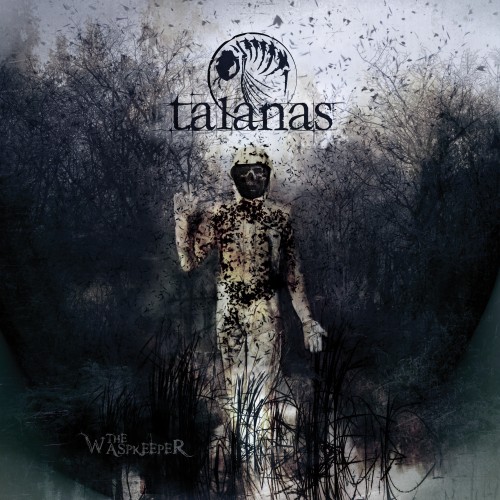 Progressive is as progressive does. Arguably many of the more “progressive” bands, those who would consider themselves “prog” first and foremost, stopped actually progressing a long time ago, substituting length and embellishment for actual growth. Yet the true ideals of progressive music have long since bled into other genres, allowing them much more room to expand.

This leads us to the progressive form of death metal performed by the UK’s Talanas. Their immutable fusion of raging death-metal ferocity and moody, gothic melancholy – sprinkled with moments of blackened despair – echoes the eclectic, experimental sounds of Septic Flesh, the unerring power and passion of Novembers Doom and the gothic grandeur of My Dying Bride, yet breaks free of these restrictive comparisons with practiced ease. Their sound covers a wide spectrum of themes and emotions, confident and self-assured enough to explore deep layers of nuance and subtlety without ever losing sight of its ultimate goal or a sense of its own individual identity.

After a teasing intro, opener “Ananta (The Portrait)” leads with a scathing series of up-tempo guitars and aggressive growls, matching discordant splendour with haunting ambience. The vocals of Hal Sinden provide a variety of tones and styles, mid-range, broken-glass screams transforming effortlessly into smooth, mellifluous cleans, before delving into the depths of rumbling, guttural fury. Prominent keyboards and enigmatic clean guitars divert the song down unexpected paths, relying on the propulsive drums to maintain momentum as the song proceeds in a tormented, convoluted manner. (more after the jump, including some music . . .) 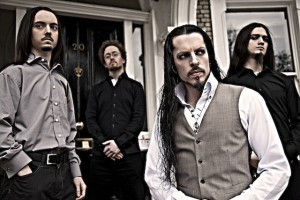 Follow-up “The Veil & Its Behest” maintains this difficult balance between venomous rancour  and brooding sorrow, employing twisted technicality and eerie vibrations in equal measure. The vocals lead with a clean, melodramatic croon while the instruments flow through pummelling riffs, twisted arpeggios and reverb-drenched moments of clean-picked introspection. Perhaps the greatest achievement of this track (and the record as a whole) is its ability to maintain its unpredictable nature, even when all the main constituents – clean/death vocals, gothic keys, acoustic, introspective guitars – which enhance the band’s core death metal sound have already been identified. Rarely is it possible to predict the next twist or turn the band will take and, perhaps just as importantly, the quiet moments never conflict or interfere with the momentum established by the bombastic death metal surrounding them. Somehow, the band have managed to integrate the whole package together without relying on the oft-used contrast between light and dark, quiet and loud.

“A Fortune Worth It’s Disguise” errs more on the aggressive side of matters, bulldozing all in its path with a mix of spiky guitars and rumbling death growls that recall a more energised and complex Novembers Doom. The catchy, infectious riff refrains provide deep hooks with which to grab the listener, the band unafraid to evoke a massive chorus here and there, for greatest effect. Bouncy and belligerent, the drums drive the song through a sequence of primal riffing and echoing clean guitars, Hal Sinden and guest vocalist JD Quintus (The Meads of Asphodel) utilising their manifold vocals to great effect once more. This brooding mid-song interlude is thick with dark promise, organically integrated into the overall narrative of the track’s more aggressive mien and its stunning, thunderous conclusion. 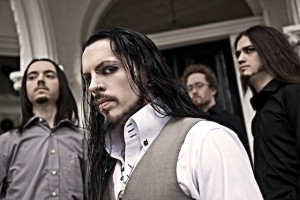 “Messaline” begins quietly with Sinden’s wounded, pained vocals and a moody, minimalist guitar line picking through the song’s central coda, which is soon overwhelmed by an avalanche of grating guitars and cacophonous drums. The disconsolate air of the track does not prevent it from possessing a maddeningly insistent chorus, the vocals trading off harsh gutturals and smooth cleans with aplomb. The song’s second half contains several shifts in direction, bleak and winding tremolo melodies fading in and out of focus as the throbbing bass-lines provide an oscillating, pulsing heart-beat, the band utilising variances on the original chorus refrain to tie the several movements of the track together without invoking accusations of repetition.

An enthralling atmosphere pervades the doomy jazz of “Elsewhere, But For The Giving”, odd chords and compellingly abstract melodies drawing the listener in with an awkward grace. The ebb and flow of cacophonous keyboards and warped intensity drags one ever onwards, unrelenting in its suffocating, crushing pressure. Sparingly used moments of solemn, meditative melody serve to enhance the unsettling nature of the song, their shining purity rising out of the sludgy emotional morass of gaunt, mournful chords, signs of life in a dying animal which, just before its ending, convulses violently with deathly power and obsidian power.

The unpredictable nature of “The Ecstasy Of Betrayal” is difficult to pin down, beginning as it does as an angular, rhythmic death metal track that recalls the occult fury of Septic Flesh – scratching, tortured guitar strings scraping violently while the vocals rage with refined, calculated animosity. Yet, without compromising this heaviness, the band employs ringing clean guitars and extravagant clean vocal refrains which accentuate the crashing waves of distorted guitars and undulating bass-lines with their subtle presence and understated intensity. The song’s shape-shifting and dynamic second half is deservedly crowned by a stunning guitar solo, leading effortlessly into a spiky series of muscular, Opeth-ian riffs which serve to underwrite the band’s keen grasp on the nuances of composition. 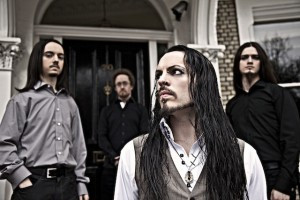 Prowling and redolent with subdued menace, “Penetralium” is possessed of shades of Akercocke’s blackened majesty, its threatening introductory passages foreshadowing the mix of punishing guitars, morose clean passages and jarring, nerve-jangling shifts between clean ambience and filthy death metal vehemence which follows. One can truly feel the guitarists wringing every ounce of passion from their instruments on this track, be it through rolling riffs or flesh-ripping technicality, their death-like fervour bleeding through as they explore the depths of ominous dissonance and the expanses of desolate, dream-like textures.

“Prussia White” is a minimalist, contemplative interlude, its morose stanzas of flowing keys and brittle clean-picked guitars serving as a brief yet mesmerising moment of clarity before the zealous misanthropy of “Antiphon” kicks in . The controlled chaos of the track is held firmly in place and directed by the mechanically interlocked bass and drum combo, while the rise and fall of clean-sung and growled vocals provides an impressively diverse assault upon the senses. The guitars crank out energetically brutal, yet always nuanced, riffs without pause or hesitation, their crackling, distorted presence exposing the scarred soul underpinning the song. The haunting atmospherics toyed with here once gain recall the moodier, more experimental era of Greek death metal warriors Septic Flesh, and demonstrate a fearless disregard for convention or genre limitations.

Closing with the pairing of “The Unhealing I” and “The Unhealing II”, the record ends on a stunning high note, balancing an air of calm serenity with an anvil-heavy delivery. The sombre opening of “The Unhealing I” has a mournful, funeral cast to it, building up into a coil of twining bass notes and jazzy guitars before finally erupting into a monolithic array of riffs and monstrous drums. The vocals, against expectations, continue to weave a web of captivating melody atop this base of explosive riffage, accented by sudden expulsions of demonic gutturals – this amorphous, chameleonic character is matched by the guitars which shift from a cascade of tumultuous death metal chords to oddly-arranged, cleanly played jazz notes and scales without missing a beat, requiring one’s full attention to follow and absorb. 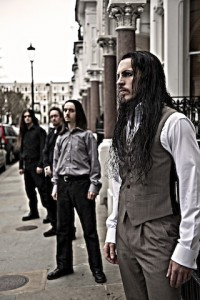 The whispered, reflective aura that concludes the song leads with unbroken step into the scintillating, gothic austerity of “The Unhealing II”, a more overtly dramatic, yet no less emotionally devastating number. The vocals are delivered with a suicidal cadence, the music a danse macabre of bare-bones, skeletal melodies, each instrument seemingly playing its own tune, yet somehow perfectly accentuating the others. The loss and longing that drips from Hal Sinden’s vocals paint a bleak picture of shapeless, indescribable despair adorned by pulsing, dark mood-scapes and ethereal synth patterns which lull the album into its final, dramless sleep.

I don’t think it’s overstating things to say that with this album Talanas have stepped up to the levels of their influences, able to stand toe-to-toe with their peers and predecessors alike. Challenging Novembers Doom for the crown of melancholic majesty, the group have blended their influences and individual personas into a vibrant concoction where classical compositions are altered and mutated, fractured by a prism of progressive instrumentation and primal death-metal heft. The greatest strength of this album is in its composition – each song is a distinctive piece of work that flows seamlessly through multiple styles and movements without ever feeling muddled or confused, each track possessing its own identity yet also contributing to the identity of the album as a whole. It’s a complex construct that will take multiple listens to fully peel apart and appreciate, and is all the more rewarding for that.

[audio:https://www.nocleansinging.com/wp-content/uploads/2011/07/03-a-fortune-worth-its-disguise-TALANAS-the-waspkeeper-Eulogy-Media-Ltd-2011.mp3|titles=Talanas – a fortune worth its disguise]

EDITOR’S NOTE: In addition to the guest appearance of JD Quintus, Akercocke’s Jason Mendonça appears as a guest vocalist on “Penetralium”, and Adam Ever (From Great Height) contributes vocals on “Messaline”. The Waspkeeper is out now on Eulogy Media. To follow Talanas without being obtrusive about it, their Facebook page is here. And finally, here’s an official video for the song “Antiphon”: