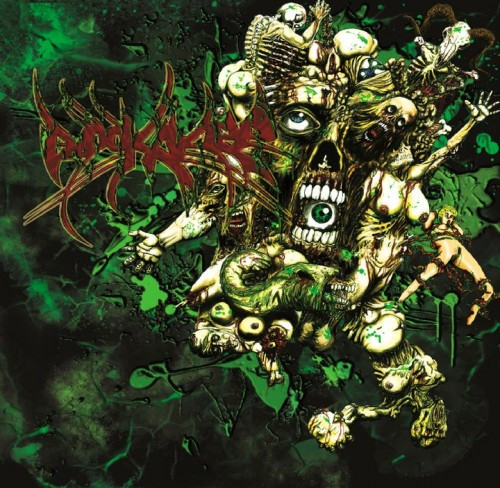 (NCS writer Israel Flanders reviews Invasion of the Depraved, the debut EP from Montreal’s Bookakee, and for a limited time, has arranged to give you a free download of the EP.)

Bookakee is a Canadian progressive tech-death band who’ve got quite an eccentric direction in their sound.  Throwing combinations of ideas into songs that just should not work, it amazes me that they pull it off.

The beginning song “A.A” opens up with a clean intro that sounds straight out of — dare I say — a Mastodon album. After it ushers you in, you’re hit by a blistering onslaught of technical melodic riffing. The production on this EP, as you’ll pick up right away, is INSANELY clean, with a superb degree of clarity.  This is so very much needed, as Bookakee’s music, especially their guitar work, is off the wall.  The song progresses into a VERY Death-like section before continuing on with its melodic onslaught.  There is a bit of a hit of Necrophagist in this song, but not so much that it feels at all like a ripoff.  I also love the clean section that emerges later in the song, adding a Spanish flavor.

“Bookakee Blast” opens up with an insanely fast sweep, moving into a bit more intense and less melodic onslaught compared to the previous song.  This one is full speed ahead and musically just all over the place. “Carcass Coffin” has a VERY nice, eerie clean opening that reminds me quite a bit of Whoracle-era In Flames; same goes for the distorted version that follows soon thereafter.  UNLEASH BRUTAL PLODDING RIFFAGE FOLLOWED BY TECH RAPE.  This song pretty much hits you like a sledge-hammer until the clean section, which gradually picks up speed and delivers a big climax. (more after the jump . . .) 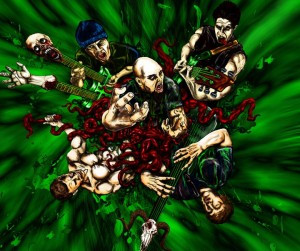 “DBS” is only 43 seconds long, but it’s 43 seconds of being destroyed by insane, really out-there tapping and brutal riffing at deliriously fast speeds.  I’d call it a grindcore song myself.  We then hit “Invasion Of The Depraved” — an epic 8-minute sledge-hammer with plenty of dynamic ups and downs that really showcases EVERYTHING good about Bookakee.  The best song, though, is the last.  What Is the last song, you ask?  It’s a cover of the Super Mario 3 theme song.

This is kick-ass tech-death with a VERY eccentric twist to it.  This may turn some people off, I admit, because it’s so all-over-the-place, but this really shouldn’t be passed up at all.  Good thing is, you shouldn’t have to pass it up, because guitarist Mat Pre has given me permission to post this EP for the next week.  First, a video, then the download link. Enjoy.

For more info about the band, Bookakee’s Facebook page is here.

4 Responses to “SHORT BUT SWEET: BOOKAKEE”