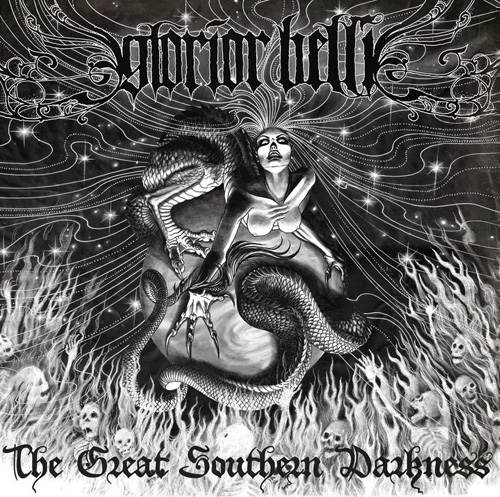 I’ve been immersing myself in black metal today in preparation for writing the latest in our increasingly infrequent MISCELLANY posts, which will see the light of day tomorrow. I decided to give that post a black-metal theme, and so when I saw a press release an hour ago about Parisian black-metal band Glorior Belli, I stopped what I was doing and explored further — just to stay wholly within the blackened realm for a bit longer.

Glorior Belli could well have been included in the MISCELLANY post, because they’re a band whose music I can’t remember hearing before, though I’m certainly familiar with the name. They have a new album called The Great Southern Darkness scheduled for release via Metal Blade on September 27, and today they began streaming the first single from the album, “Secret Ride to Rebellion”.

The press release also gave me my first look at the cover art for the album, which as you can see, is a real eye-catcher. It’s by a Canadian artist named Alexandra Snelgrove. I like it very much. I like the new single very much, too. It charges from the launch with a blizzard of tremolo intensity, attacking drums, and raw, predatory vocals, but it’s got a grooving, swampy, rock style-beat, a catchy melody, and a very sweet bass track — which means (you guessed it), the production on this song is clean and sharp as knives. Have a listen after the jump.

You can find pre-order details for The Great Southern Darkness at the band’s official Metal Blade landing page, HERE. For more info about the band and the album, check out these links:

3 Responses to “A SECRET RIDE”