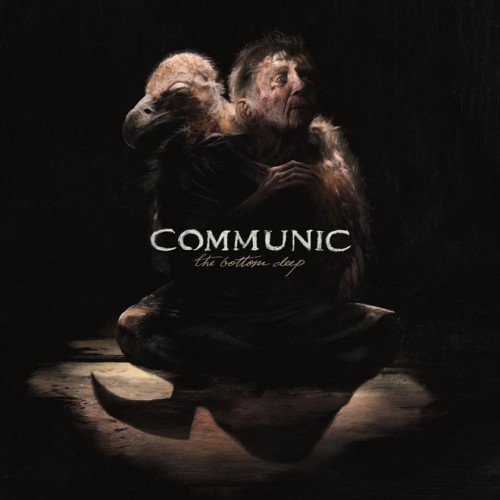 (Andy Synn follows his SYNN REPORT on the discography of Norway’s Communic (located here) with this review of the band’s brand new album.)

After several listens, my impression is that The Bottom Deep is an overall darker affair than we have seen before from Communic. The progression from Payment Of Existence has seen the group shift their focus slightly from their characteristically expressive melodic nuances to a pressurised, gloomier form of morose and self-absorbed introspection. The songs have a doom-laden vibe that matches the enigmatic concept which underpins the record. The ever-present and insidious synths have taken on a far darker tone, working for the band as yet another tool with which they can mine the rich seam of deep-seated personal tragedy which fits the conceptually-bound constraints of the album perfectly.

“Facing Tomorrow” begins the record in striking style, inflicting heavy damage with a wall of guitars that bears remorselessly down upon the listener from the off. Cryptic and convoluted, the song bulges at the seams with ferocious metallic power, the sheer meatiness of the guitar tone giving every power-house riff and nimble scattering of lead notes a sense of prodigious potency that, coupled with Tor Atle Andersen’s display of manic, multi-limbed drumming, provides each song with a dense, unshakeable foundation.

Singer Oddleif Stensland has altered his vocal style subtly, delivering his abstract lyrics with a more resonant croon, deeper and more constrained than before. His grittier delivery adds another string to his bow, not yet as strong as his traditional mode of singing, but showcasing the man attempting to grow and develop the use of his instrument further. (more after the jump . . .) 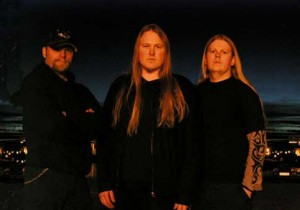 Follow-up “Denial” is a more overtly melodic, yet no less impactful, affair. A seductive siren song of gothic melodrama and softly spoken vocals, it shimmers with dark clarity, an organic diamond of progressive constraints and trad-metal histrionics that only occasionally loses its way amongst slightly aimless sound and fury.

The track does serve as an effective preface to the electric dynamism of “Flood River Blood”, whose eloquent, semi-clean verses flow with a languid, hypnotic grace toward storming torrents of distorted majesty and down-tuned puissance. Short and sharp, the song progresses with focussed, pin-point accuracy, delivering shots of adrenaline whenever the mood threatens to fade or falter.

The beginning of “Voyage Of Discovery” is enraptured by a soulful progression of tenebrous, borderline evil, semi-clean notes, loaded with dark and fulsome promise. Lightning strikes, piercing the gloom, as the cutting electric guitars and massive sounding drums rear their head with primal ferocity, even to the point where scarifying, death-metal riffs make their presence known with punishing vehemence. Stensland’s vocals are at their most passionate and aggressive here, still retaining their gutsy clarity and vision, but twisting and snarling with an anger that fits the track’s extreme intensity.

By contrast, the collapsing avalanche of down-tuned brute-strength that begins “In Silence With My Scars” stands somewhat apart from the rest of the track. A dichotomy arises between the focussed power of the intro and the somewhat directionless impetus of the rest of the song, which bulls its way along with clout and vigour, but really only achieves a demonstration of persistence and determination without making any real impact or achieving any real emotional connection. 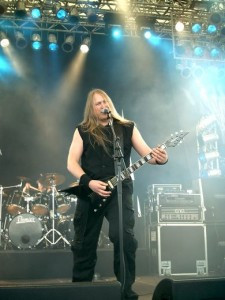 On “My Fallen” the band weave meditative calm and ravishing intensity to conjure a soaring, sky-scraping soundscape of charged chords and tremulous bass lines before knuckling down with industrious fervour to build a marching, unstoppable groove, locking the guitars, bass and drums into a militaristically precise assault which strains with barely suppressed tension. More than any other, this track is a grandiose affair, scaling mountainous highs and delving into cavernous lows with an explorer’s mad zeal, glorying in its own excesses and extremities in a fearless display of expertly harnessed, progressive potential.

Though the record is primarily a stomping, mid-paced affair, this does not mean that the band are afraid to put their foot on the throttle when the occasion calls for it, the blunt force nihilism of “Destroyer Of Bloodlines” hitting hard with its signature combustive kick rolls and Erik Mortensen’s booming bass, which rumbles with rhythmic, Richter-scale force. Vast ringing chords explode overhead, an airburst of muscle and melody, bookended by impressive moments of high-octane intensity that ignite suddenly with blitzkrieg fury.  The song climaxes with a sharpened solo and pummelling, chugging ending riff that leaves the listener stunned and breathless.

The pairing of “Wayward Soul” and “The Bottom Deep” ends the album on a compelling, yet downbeat note. The former melds mournful melodies with thick, claustrophobic bouts of heaving heaviness, its varied construction perfectly accenting the despairing lyrical themes, leading into the frail acoustic work of the album’s title track, over which Stensland delivers a memorable tale of woe in his distinctive, tormented vocals.

As a bonus, the album also features two cover tracks, a first (and second, naturally) for Communic. The first is Overkill standard “In Union We Stand”, which is transformed by the brilliant vocals and melodically textured guitars into a more fundamentally grand number. It kicks hard, with bruising riffs and a commanding vocal presence, and really demonstrates the artificiality that underpins many of our genre definitions, sounding equally as trad-metal as it does thrash, while also drawing heavily on the sheer unbridled spectacle of prime power metal. 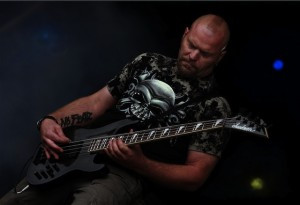 The second, which will perhaps attract the most interest, is a cover of the tortured Nine Inch Nails classic “Hurt”. Though the track doesn’t pull any massively surprising moves, weeping and raging at the expected moments, it does so with an honesty and passion that fits the overall vibe of the album perfectly and showcases Stensland’s emotional range extremely well.  Mortensen’s limber bass lines caress with soulful ardour throughout the song’s morose verse sections, while the song’s second chorus iteration mixes things up slightly with a more angular riff and booming drums, leading into the track’s subdued conclusion, marked by a slight, yet beautiful, solo

Communic’s development remains an interesting path to observe. With each album they stick to their progressive guns, progressing in leaps and bounds, yet consistently held back by certain elements which don’t quite achieve the heights of grandeur the band are so clearly aiming for. Yet overall, no matter how many steps back they take, each album is overall a step forward toward greater things.

EDITOR’S NOTE: The Bottom Deep was released on July 22 by Nuclear Blast. The CD’s artwork was created by Eliran Kantor, and more songs from the album are streaming at Communic’s facebook page here.

One Response to “COMMUNIC: “THE BOTTOM DEEP””