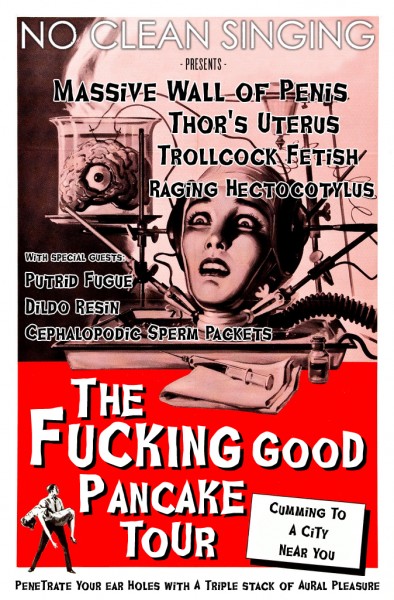 (I intended to write my own review of the inaugural show of THE FUCKING GOOD PANCAKE TOUR, but I was blinded by a money shot from one of the Cephalopodic Sperm Packets’ Super Soakers and spent the rest of the show in the ER of the Humptulips Trauma Unit as medics used a cornucopia of solvents trying to remove sticky white stuff from my corneas. Fortunately, Phro was on hand and provided this report.)

As the lights dimmed in the crowded VFW hall of Humptulips, Washington, the throng of metalheads reached maximum thronginess.  It was like being trapped inside of grandma’s underwear right after a healthy dose of Mexican food.  Definitely a place you wanted to be, but still not entirely comfortable.  I even got some smelly splooge on me, though I have no idea where it came from…

Anyway, doors opened at 5:30, but when I got there at 4:00, there was already a 200-yard long line.  Lorises in full black-metal regalia darted in and out of the line, supplying patrons with food, drinks, assorted tour memorabilia and pee/poop bottles.  I noted down a memo to myself to ask Mr. Lander what he did with all the waste material, but I ended up finding the answer out later during the show.  But more about your mother’s fat ass later!  Zing!  (No, but really, what did you do with all that filth, Mr. Lander?) 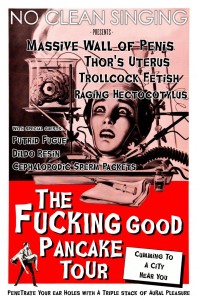 Everyone waited patiently, sharing stories about the various bands and commenting on the loveliness of ponies.  Then, promptly at 6:00, low, eerie music began to rise and swell like a quivering donkey dick.  As the music rose, the crowd grew increasingly quiet.  Just as the music was about to hit a crescendo, it started to quiet, slowly falling to a low murmur.  Just as people were starting to look confused, Cephalopodic Sperm Packets’ “I Cum Bloody Tentacle Babies” erupted through the PA and the curtains were ripped apart as an octopus mascot dove from the stage into the crowd.  The circle pit was a thing of wriggling beauty.

Cephalopodic Sperm Packets only had about 30 minutes to get through their set, but they played masterfully.  After the opener, they thanked the crowd for coming and then launched into “Come On, Baby, It Won’t Hurt”.  The melody sounds surprisingly sweet when performed live.  After a few more excellent tunes, they prepared for their finale.

After Didlo Resin’s set, there was a bit of a problem with the strobe lights.  We ended up having to throw lorises at them until one of them got stuck and shorted the whole thing out.  No fire, no foul, so we just went ahead with the show without the strobe lights.  Poor little dude looked like Ronald McDonald after getting blown by the Burglar when he finally got down.

Then it was Putrid Fugue’s turn.  Even towards the back, we could smell them arrive on stage well before the curtains opened.  A 300-pound fan in the front actually passed out and almost crushed a 110-pound girl to death before security freed her.  Dressed like drowned corpses, they stood perfectly still until they launched into their number one single (as in Top 40, but you knew that), “Saturday”.  The moment the first chord was strummed, the entire crowd jumped up as one and then slammed hard with the massive fucking bass drop that came next.  I think the floor cracked, but it was hard to tell as the entire room erupted like a volcano.  A volcano filled with angry, smelly lava.

They had a bit more time to play, but, even so, stuck mostly with their more well-known songs.  I thought they really nailed “Yo dawg, I Put a Zombie Dick in Your Zombie Dick, So You Can Fuck Zombie Vagoo While You Fuck Zombie Vagoo”, but I did catch more than one audience member projectile vomiting.  I guess they forgot to put the menthol salve under their noses.  Pro-tip, guys and gals: menthol salve won’t eliminate the odor of Putrid Fugue, but it will at least make it smell less like a rotting landfill of gonorrheal diarrhea  and more like a day old, bloody tampon.  They ended strong with “Is My Ass Rotting or Does This Chair Just Suck” and then froze in place as the curtains slid closed.  Unfortunately, one of the lorises slipped on a puddle of vomit and landed mouth first in it.  The resulting vomit session was both horrific and magnificent.

After a 20-minute break in which the lorises worked double-time to clean up the puke, Raging Hectocotylus took the stage.  The band actually only consists of one guy playing all the instruments with his eight arms while mentally controlling two psych-slave octopuses in a giant tank.  This was definitely a highlight for me.  Raging Hectocotylus has always impressed me with his ability to elevate the art of octoslavefucking into a near act of divinity.  The audience watched in mute awe as his unique brand of noh metal permeated the tank and his two adorable octopuses fucked.  The VFW thoughtfully supplied us with a hugeass 3D TV to watch a close-up of the actually hectocotylus detachment.  Moving stuff.  I wish I could better describe the music, but if you’d heard it, you’d know how impossible that would be.

Once the octopus tank was removed from the stage and the 10-minute ovation finally ended,  Trollcock Fetish took the stage.  Sally McFuck, the growler for the band, was sporting a full troll costume, complete with green tits and a disturbingly oversized clitoris.  The rest of the band was mostly naked and covered in green body paint.  Ms. McFuck would routinely poke, prod, stab, pinch, and twist their genitals as they played.  The bassist was the only one to miss a note, and we soon found out why.  By the time she was done beating him with her cock shaped microphone, he had came three times from the pain excitement.  He also had a broken arm and had lost three teeth but managed to soldier on through the rest of the set.

After launching into a particularly brutal rendition of “Under a Bridge, Fucking Your Skull”, Ms. McFuck leapt into the circle pit and proceeded to anally penetrate anyone willing to take it with her microphone while the rest of the band played a grindcore version of “Ride of the Valkyries”.  Really poetic stuff, I thought.

After a long break in which hot sandwiches and Jack Daniels was served, Thor’s Uterus took the stage.  Now, I, personally, am not as much of a melodeath fan as some of you are, but I have to admit that these guys just know how to rock the fuck out.  Despite having some technical issues resulting from an errant lightning strike in which half their monitors went out, the band really played a tight set.

I really liked their live version of “With Loki On Our Side”.  It had a swing to it that you miss without the rumble of live bass.  Also, Erick Erickson the Ericksonest really nailed the vocal style to a cross and fucked it stupid.  I have come down on some melodeath vocalists before for lacking venom, but this guy sounded like he coming rat poison out of his mouth.  They even played a cover of one of the new In Flames songs.  They ended, surprisingly, with “Born With an Ax In My Eye and Hate In My Vagoo”.  I had expected them to finish with “On a Bloody Pyre of Bloody Fire and Bloody Blood”.  They did, fortunately, keep the tradition of having an audience member give birth to the reincarnation of Thor on stage.  I really have to hand it to Bob for volunteering.

I was particularly impressed when he was able to pull off the ridiculous solo in “Penis Penis Penis”.  But he melded well with the band, and they got the whole audience to flip out like lorises on loriscrack with “Penis Penis Penis Penis”.  Of course, Big Floppy, the drummer, gave one of the best performances of his drum solo in “PENIS!” yet.  I was really happy that they even got to do “Penis. Penis! Penis? Penis. Penis! Penis? Penis!”  I had heard that they’d be retiring that song from their live set since so many fans end up losing their dicks due to zipper-related injuries when trying to helicopter too hard.  But, I will say, there were surprisingly few severed members at the end of the night.

Well, I have to say it was an awesome fucking show.  Every single band delivered like the postman fucking yo’ momma.  I also really gotta hand it to the audience for being respectful and really doing a lot to give metalheads the good name their deserve!!!

Be sure to check the tour dates and get your damn self to the next show you can!

EDITOR’S NOTE: Thank you Phro for the vivid report! I wanted to include photos of the show with this review, but unfortunately Phro attempted (unsuccessfully) to use his camera as a bunghole shield during the Trollcock Fetish set, and Sally McFuck penetrated it with her cock-shaped mic. Better luck next time bro!

REMINDER: We still haven’t maxed out on our offer of free t-shirts sporting the tour poster, so get up on that. Details are HERE.

19 Responses to “NOTES FROM THE UNDERGROUND”