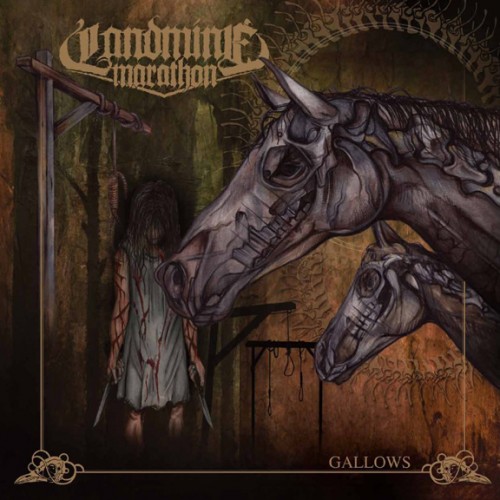 To start with, let me confess that Landmine Marathon’s last album, Sovereign Descent didn’t thrill me as much as I expected it to. It was a good record, no doubt, possessing some particularly great songs with which to bludgeon the listener into submission. Yet the production seemed too… cold… lifeless even, robbing the songs of the fire and vibrancy the band display live. It was neither one thing nor the other, neither larger than life nor clinically precise, leaving the band adrift in a void of directionless sound and fury – through no fault of their own!

In truth, it remains their debut album Wounded that I love best out of Landmine Marathon’s discography, thanks partially to its massive guitar tone and chaotic, cacophonous drum sound, accented by some incisive, scalpel-sharp melodies, whose presence makes the devastating display of focussed violence all the more effective by contrast. However Gallows may be the album to change all that.

The group’s latest album sees a return to the more monolithic tone of Wounded, resulting in a thicker and more muscular sound married to a sleek and supple series of sinuous song structures, all claws and teeth and broken bones. Capturing a more propulsive form of energy, much of the album recalls Maryland natives Misery Index, albeit with a dirtier overall vibe, expressing urban blight and sprawl in all its decadent, decaying glory. Eschewing the overtly politicised polemic of their Baltimore brethren, the sandpapered vocal chords of Ms Grace Perry vomit forth a virulent stream of putrid bile and hateful invective over a plethora of gut-wrenching, street-level death metal riffs and sharpened knife-fight guitar melodies, which flicker and stab without warning. (more after the jump . . .)

There is more melody on this release, yes – see for example the scorching leads of “Three Snake Leaves” and insidious tremolo’d note swarms that infect the chugging malice of “Beaten And Left Blind”, or even the ominous, mental apocalypse of “Morbidity”, with its remorseless funeral march of doom-laden chords and crashing percussion. Yet this is not melody of a pleasant sort. It does not soothe or act as balm to the scars borne by the music; rather it is a tooth-aching, nagging sort of melody, the itching, scratching compulsion of a pain so familiar it has almost become pleasure.

Taking the writhing, twisted style of Morbid Angel and injecting it with corrupting punk and grind influences, songs like the brutally direct “Cutting Flesh And Bone” and the sickly, lurching crawl of “Knife From My Sleeve” exhume the group’s death metal roots and drag them kicking and screaming through the gutter, red-eyed and frothing with rabid, feral fury. The album features perhaps the group’s most impressive drumming performance yet, the nerve-wracking, agonised convulsions of a song like “Liver And Lungs” crackling with impulsive intensity and rolling with narcotic grace.

“Dead Horses” bleeds disgust and self-loathing from its self-inflicted wounds, wrapping itself in looping garrottes of barbed-wire guitar melodies and spiteful, venomous vocal expletives, slowly sinking into a mire of down-tuned, chugging depravity and heaving, choking chords, while the stripped-down carcass of “Cloaked In Red”, flesh flayed from crippled bones by a sandstorm of wounded screams and scraping riffs, stomps and pummels with unflinching, psychotic intensity. Striking a precarious balance between rawness and refinement, the meaty production accents this primal fury with a more horrific sound and power, disturbing in its eye-gouging ferocity, without stripping it of its sneering, punkish vibe. Indeed, this remains very much an album of the underground, stalking from the gallows to the gutter with predatory intent. This muscular, menacing beast, strengthened by trial and hardship, remains disturbingly familiar yet unsettlingly alien – both a part of, yet separate from, its environment. The album bulges at the seams with barely suppressed violence, armed with an array of hypnotic, winding riffs with which it maps out a dizzying descent into madness and squalor, prowling the shadows with sociopathic malevolence.

The band have clearly struggled tooth and nail to capture both their live intensity and their larger apocalyptic vision in equal measure. And for perhaps the first time, they have exceeded expectations. This is a crushing display of angst and ire, less a political statement than a reflection of societal decline, a product of its time and environment, turning angrily against its creator.

Is it grind at all? I don’t know. For me, grind is something disgustingly inhuman – whereas this is the opposite – it’s sickeningly human, full to bursting with an all-too familiar horror and despondency, brimming with disgust at the incontinence and frailty of the human condition.

This is squalor and filth set to musical form. Death metal for the downtrodden. Brutality for the broken. Human… all too fucking human.

EDITOR’S NOTE: Gallows will be released on September 27 via Prosthetic Records. The superb cover art was created by U.K. artist Rob “Mid ” Middleton, who has previously worked with Napalm Death, Extreme Noise Terror and Deviated Instinct (in which Middleton plays guitar), among others.

Earlier this week, REVOLVER magazine premiered the opening track from Gallows, “Three Snake Leaves”. To get a first-hand taste of what Gallows has to offer, go HERE and give that song a listen. Another song, “Cutting Flesh and Bone”, debuted at Stereogum, and you can stream that one here.