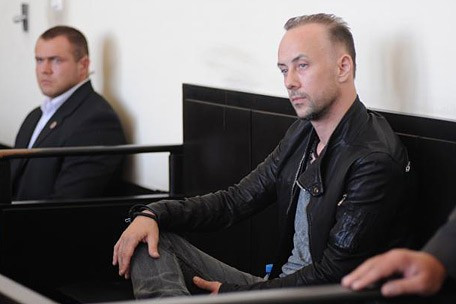 Here at NCS, we avoid the daily news like the plague (unless it involves metal), because it offers constant reminders that human beings are fucking nuts, and not in a good way. For every small step of advancement toward civilization, there seem to be about 10 steps in regression as the self-centered and the arrogant persist in reenacting acts of gob-smacking idiocy that have been a feature of the human landscape for millenia and inflicting their prejudices on people who don’t think or act as they do.

But there are just enough, just barely enough, episodes of rationality to keep hope alive that a day will come when most people will act like the higher-order creatures they are supposed to be, instead of just bigger-brained versions of water buffalo and warthogs.

This week we had news about the lifting of legal clouds in two criminal cases that most metalheads have come to know quite well — the murder case against the West Memphis 3 in Jonesboro, Arkansas, and the prosecution of Adam Darski (a/k/a Nergal) of Behemoth for giving offense to religion in Poland.

According to this story, a Polish judge found Nergal innocent of offending religious feeling when he ripped up a Bible during a 2007 Behemoth concert, called the Bible “a deceitful book”, and branded the church a “criminal sect.” The judge held that Nergal’s actions were “a form of artistic expression consistent with the style of his band.” Duh. He added that the court had no intention of limiting freedom of expression or the right to criticize religion. That’s an encouraging pronouncement.

Nergal can now go about the business of continuing to recover from leukemia and practicing for Behemoth’s next live performances this fall. No doubt, his detractors in Poland are seething over this turn of events, still stubbornly refusing to understand that trying to jail people who speak ill of churches, no matter how “offensively,” or who tear up “holy books,” won’t silence criticism of churches or religion. If people aren’t secure enough in their own faith to ignore what people like Nergal do in performances for their own fans, then enforcing laws against religious offense won’t save them. (more after the jump . . .) 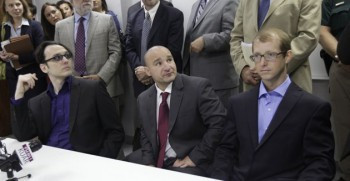 The case of the West Memphis 3 is more complicated and more serious, since it involves not charges of saying something offensive, but charges of murder. On May 5, 1993, three 8-year-old Cub Scouts were killed in particularly gruesome ways. They were dumped in a ditch, nude and hogtied. Two of them drowned in about 2 feet of water. The third bled to death, and his genitals were mutilated and partially removed.

Arkansas prosecutors claimed the killings were the result of some kind of “Satanic” ritual, and suspicion fell on three teenagers — Damien Echols, Jason Baldwin, and Jessie Misskelly — in part because they wore dark clothing, including heavy metal band shirts. In 1994, all three were convicted. Echols was sentenced to death and the other two to life in prison.

All three have spent the last 18 years in jail or in prison, despite an abysmally flawed police investigation, serious conflicts and deficiencies in the State’s proof, and evidence of blatant juror misconduct during the trial. Recent DNA established no link between those three and the crime scene, but did show the presence of other persons who have never been identified. 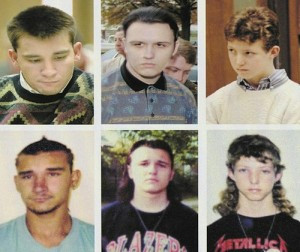 Last fall, the Arkansas Supreme Court ordered a new hearing for the West Memphis 3, ordering the trial court to consider the allegations of juror misconduct and the new DNA evidence. In June, prosecutors in effect conceded that juror misconduct had occurred, and they apparently didn’t like their odds of success in fighting the DNA evidence, and so, according to this story, they offered Echols, Baldwin, and Misskelly a deal: Enter a so-called “Alford plea”, in which a defendant is allowed to maintain his innocence but admit that the State has enough evidence to obtain a conviction, receive credit for time served, and be released immediately.

Yesterday, facing the prospect of possibly more years in prison while the legal process continues to roll glacially forward with the new hearing and likely a new trial, the West Memphis 3 took the deal, and obtained their freedom. Prosecutors continued to insist that the three are guilty, and there’s no indication that the State will make any effort to search for others who may have committed the murders.

What happened to Echols, Baldwin, and Misskelly has come to symbolize the persecution and intolerance to which many metalheads have felt subjected in their communities. I tend to think it’s more symbolic of an even more pervasive problem — prosecutors hell-bent on obtaining and preserving convictions despite serious flaws in the proof of guilt, instead of seeing that justice is done.

Regardless, these three did not deserve to spend the last 18 years of their lives behind bars. As it so often does, the justice system failed them for almost two decades, as it continues to fail those three dead children.