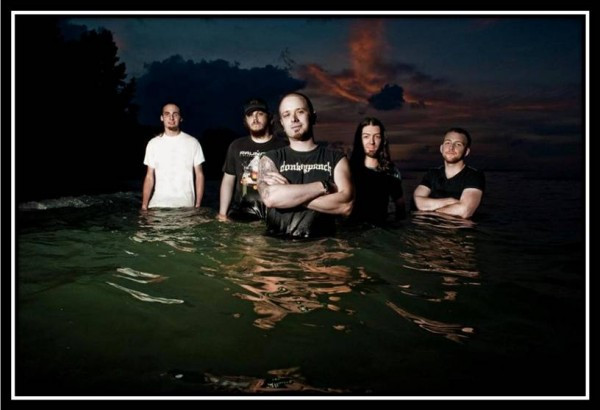 One week ago, we took note of the release date and album art for the new Nuclear Blast release by Canada’s Threat Signal. We also took note of a statement by the band that the whole new self-titled album would mark a return to the days of Under Reprisal, “but with bigger balls”. Well, as they say, talk is cheap. We welcomed that statement, but were cautiously awaiting the real proof.

Now we have some proof, because not long ago the band posted the first track from the new album on their Facebook page, and they’ve also made it available for free download (though you’ll have to share it on Facebook or Twitter to get the download). It’s called “Fallen Disciples”. Too soon to render a verdict on the whole album based on one song, but I will say this — the song do have some big testes.

The song is built around a pneumatic jackhammer of downtuned riffage working overtime. The vocals sound authentically pissed-off, even when they’re hurling the melody straight at your face. The guitar solo swirls and screams with abandon. It’s a swift kick in your own testes.  Worth checking out I think.

To hear the song for yourself and to download it, the band’s Facebook page can be accessed here. I don’t yet have the ability to embed it, or I’d do that right here. [UPDATE: YES I DO NOW HAVE THE ABILITY TO EMBED IT!] The new album is scheduled for release in physical and digital formats on October 7 in Europe and October 11 in North America. It was produced and mixed by Zeuss at Planet-Z Recordings in Hadley, MA, and that’s usually a good sign — already being borne out by the sound of “Fallen Disciples”.

Go listen to the song after the jump. And hey, will someone get those poor dudes a bunch of towels and a hot toddy?