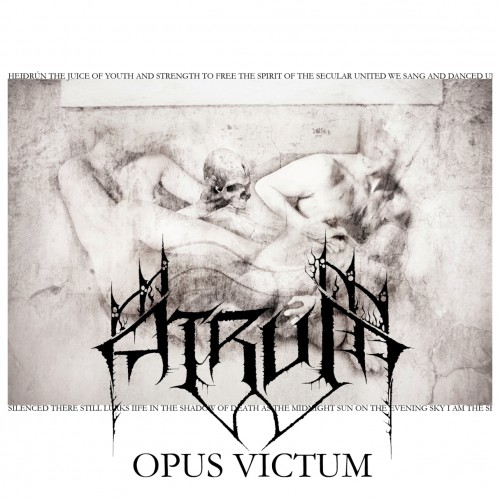 I’m very happy today to be bringing you a review of this Icelandic band’s stunningly impressive debut EP. I discovered the group after hearing about their recent performance at Eistnaflug, Iceland’s premiere metal festival where they appeared alongside Triptykon, Solstafir and The Monolith Deathcult, holding their own against these impressive acts with refined skill and power.

This extreme metal quartet’s music blurs the line between black and death metal, melding them with inspirations and aspirations drawn from classical music, to craft an epic blizzard of blackened fury and ground-shaking death metal heft that recalls a more deathly Keep Of Kalessin wrapped in a cold and venomous shroud of despondency.

“Ymir” opens the record with teasing strains of classical brass that quickly descend into a torrent of hellish blasting and crackling, electrified riffs, evoking barren, storm-lashed landscapes of wind and shadow. Piercing torrents of martial brass penetrate the blackness as the band whiplash back and forth between overwhelming fury and rolling, unpredictable groove, the vocals delivered with bite and conviction – their slithering, venomous delivery accented by guttural expulsions of hate and bile.

The song’s mid-section wears its Emperor influence proudly in its nuanced, shining drum work and imperious keyboard lines, as the band’s multiple vocalists engage in some dark and subtle harmonies. The soaring and impressive solo work that follows is underpinned by an avalanche of kick drums, while the vocals continue to impress both in their versatility and intriguing delivery that recalls a less epic, yet more violent and more unshackled Thebon from Keep Of Kalessin. (more after the jump . . .) 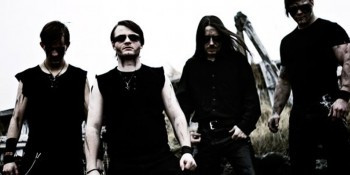 Short, sharp and unrelenting, “Secular”, with its dissonant approach to crush and catastrophe, is a more immediate number that foregoes some of the more classical aspirations of its predecessor. Featuring some singularly effective interweaving of competing guitar parts and a verse section that accents rolling groove and restrained, thrashing power with some more unhinged blasting and barbed tremolo anti-melodies, the track builds again and again to a dark, chanted chorus of blackened praise. The guitars continue to explore a diverse array of competing counter-melodies and ringing, discordance as the song builds to a melt-down of squealing lead guitars and bestial, growled vocals.

An ethereal female chorus opens “Natural Apotheosis”, its haunting, spell-binding majesty sending shivers down the spines of the devoted, leaving them easy prey for the predatory evil that follows in its wake. Brutally scything down the opening moments of funereal serenity with merciless precision, high velocity tremolo lines wind like snares around unsuspecting victims as scathing vocals fill the air with malice and hate.

Beneath the track’s dizzying and ominous solo, the drum work pursues a frenetic, diverse pattern of cascading fills and thunderous rolls, leading into a restrained display of expansive sonic majesty and bleak magnificence that provides stark contrast with its brittle, subdued nature. This fragile ambience is quickly shattered by the return of a hail-storm of battering drums and skin-flaying guitar lines that climax in an unforgiving, ground-shaking display of metallic might.

“Words Of Victor” opens with an off-kilter rhythmic assault of neck-snapping drums and percussive guitars whose boundless fury errs more on the death metal side of things. Flush with deep undercurrents of inhuman horror, the track builds wave after wave of crashing cymbals and sharply contrasting, twisted guitar lines whose monolithic construct echoes with angular riffage, cathartic screams and a short excursion into moody clean vocals. 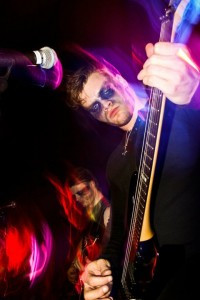 Starkly melodic guitars rise to prominence in the second half of the song, propelled by some furious, energetic drums. Sombre female clean vocals rise from the darkness to weave their magic over spell-binding drums and tortured death rattles, whose hypnotic spell is finally broken by a series of violently explosive spasms of obtuse guitar and drum work, bringing the track to a crashing, destructive halt.

With its hell-storm of scathing tremolo guitars and devastating blasting, “Forged By Storms” matches icy precision with fiery passion, bearing its scars and livid wounds openly on its ruined flesh. Notably more menacing and ominous guttural vocals dominate the proceedings, exploring occult themes which plumb the stygian depths with reckless abandon, an apotheosis of possessed fury and existential despair. Its complex, thrashy riffs are apt to suddenly shift form into whip-crack tremolo sections or chunky, oblique rhythmic patterns without warning, their rampaging fury equalled by their intelligent structures and taut, agile playing.

The song’s mid-section sees the band slow for a few moments to explore a variety of nuanced melodic themes, a soaring guitar solo metamorphosing into a vicious blast-fuelled display of incoherent rage, before transitioning into a moody piece of keyboard driven ambience, through which mellifluous bass-lines weave a meditative stream of unbroken calm, allowing the band and the listener to breathe and collect themselves before the sudden, pulse-quickening race towards the inevitable, cataclysmic conclusion.

The group continue to work threads of their pitch-black spiritualism through closer “Chaos March”, whose martial opening, accented by imperial brass, delivers a crushing staccato assault on the senses, which melds seamlessly into the more aggressive, frenzied guitar work that follows. These striking, stomping, rhythms rear their heads several times throughout the song, pounding and unflinchingly hostile in intent. 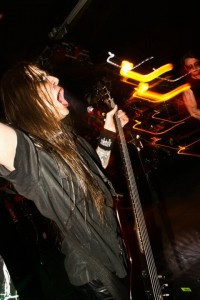 The track also features some stunning, yet effortlessly played, technical guitar work interwoven seamlessly with the heads-down death metal, exposing not only the impressive instrumental talents of the group, but also their superior compositional skills in their ability to smoothly work in frantic technical string work without weakening the unstoppable power of their berserker assault. Throughout the track, the coiled maleficence of the group’s core black metal aesthetic, poised and waiting with the patience of countless ages, cannot disguise the predatory nature of the band, nor the righteous, ungodly fury that drives them ever onwards in their pursuit of spiritual apocalypse.

From start to finish, the crisp and deadly production of the record almost perfectly accents the group’s compositional skills, showcasing their ambition to rise above the expectations and limitations of the underground to craft an imposing sonic-cathedral of malevolent melody and intense, impetuous rage. The EP’s impressive sound was achieved through self-recording and self-production by the band themselves, coupled with a mixing and mastering job by Rotting Christ’s own George Bokos.

The guitars have a cutting, crushing tone, ably supported by a crystal clear drum sound and vibrant, forceful vocals, though the bass is all too frequently buried somewhere toward the back of the mix. In a similar vein to the early work of the mighty Emperor, the keyboards aim ambitiously toward producing epic swathes of expressive classical melody, providing character and style, which raises the bar for the band’s future endeavours. 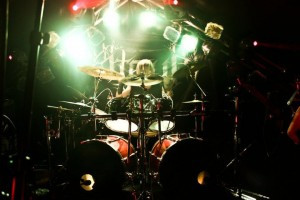 The group have the EP on offer for download right now, for a nominal cost, and it’s worth every penny. All the proceeds from this EP will go toward funding of the band’s debut full-length album, which the group are currently writing and hope to release in the first quarter of 2012. I urge you to head over to the group’s facebook page and show your support for them as a musical entity, particularly as purchasing their EP will give you access to the full artwork and lyric booklet for the release, which is more than worth investing in.

Thanks to Atli for furnishing me with a copy of the EP, plus the promo materials for it, and if the group ever release a physical version of this record, I will be first in line for a copy.

Go show the band some love at : https://www.facebook.com/atrumiceland

The EP can be purchased for download at this page (scroll down to find the “Official Store”).

EDITOR’S NOTE: We’d like to give you an immediate taste of the music, so here’s the EP’s opener, “Ymir”: