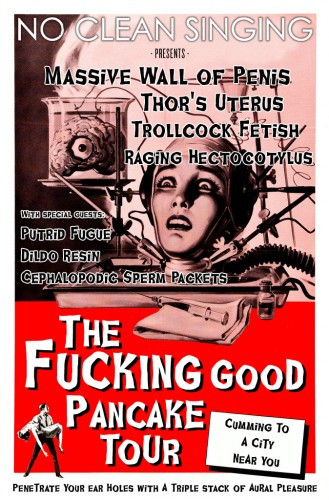 Well now, when you offer to send people free t-shirts, the least you can do is give them an update, so they don’t think you’re just fuckin’ with them after a too-late night in the neighborhood watering hole.

If we were a really top-flight, professional web site that had discovered ways of milking our traffic for actual monetary gain, we’d have our shit together. We’d already have the fuckin’ shirts made and in the mail. However, as I think I’ve made clear, we’re just a broke-down, jake-leg, half-assed labor of love created by an impulsive cretin (me) plus some other people who actually have a brain but remarkably still send me writings to publish. With no advertising, because, well . . just fuck that raw.

That means that we’re not a smoothly functioning, well-oiled machine. We don’t yet have a contract with a shirt-screen-printer to make the shirts we’re giving away, because we spend too much time listening to music and not enough time making arrangements to print shirts. BUT, we’re pretty damned close to getting that part of this project done.

The main point I want to convey is that WE DON’T FUCKIN’ LIE WHEN IT COMES TO MASSIVE WALL OF PENIS! We WILL be sending the shirts out. Just give us a little more time. By the way, remarkably enough, we still haven’t maxed out on our limit of 100 shirts. So, if you think your gramma wants a shirt with Cephalopodic Sperm Packets right on the front for her birthday (and what else can you think of to give your gramma for birthday?), hit us up.

And, y’know, if she wants a shirt with Sperm Howitzer on the front, you’ll just have to tell her to be patient. It will come. That will be the next shirt. Tell her it’s a reason to live.