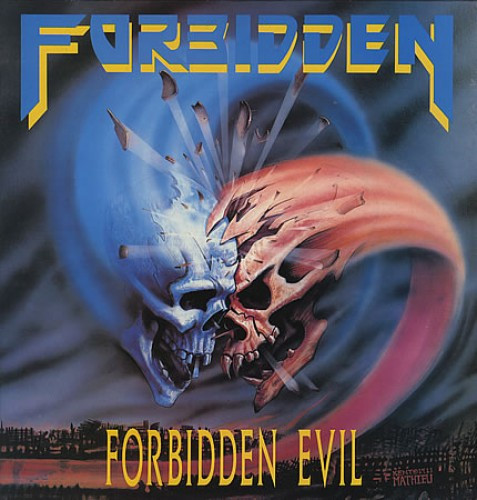 (TheMadIsraeli, who originated our now-continuing series of look-backs at metal classics, provides this latest installment, focusing on the 1988 debut by California’s Forbidden.)

Thrash metal in a lot of ways IS metal to me.  It’s the genre that, when I think about metal, I gravitate to automatically.  The energy, the frantic rage and desperation, THE FUCKING SPEED AND THE RIFFS!  It’s always astonishing to me when I meet a metalhead who doesn’t like thrash.  That’s like not liking pizza, or beer, or the combination thereof.

Forbidden was a thrash band I’d always heard about but never bothered to check out, dismissing them as a cult band who were viewed as being more legitimate than the more popular thrashers because they simply weren’t mainstream.  Boy was I wrong, and it took one unexpected circumstance to open my eyes: My girlfriend at the time made me check out Forbidden’s music.  Yes people, my girlfriend at the time had better music than I did, AND was hotter than I was, AND was more talented.  Hopefully, I’m on my way to catching up, at least on the quality of music I have.

Forbidden Evil is the typical fan favorite, as well as mine, but for good reason.  Consisting of a badass set of pipes by the name of Russ Anderson, a fierce guitar duo in Craig Locicero (one of my fav guitarists of all time mind you) and Glen Alvelais, Paul Bostaph on drums, and Matt Camacho on bass, Forbidden were poised to take the thrash circuit by storm with the release of this album. (more after the jump . . .) 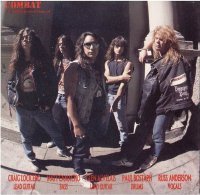 What exactly defined Forbidden?  Russ Anderson channeled the best of Dave Mustaine and Tom Araya while having the ability to do the classic Judas-Priest-air-raid-siren scream. Craig and Glen were busting out intricate, smart, dominating riffage and solos that achieved a level of sophistication ahead of their time. Matt Camacho as a bassist was ACTUALLY PLAYING HIS INSTRUMENT and YOU COULD HEAR HIS BASS ON THE RECORDING.  Audible bass on a thrash record — who woulda thunk?  Paul Bostaph’s performance on this album may be the best drum work he ever did, bringing in standard thrash fare while incorporating intricate fills, the likes of which I can’t recall hearing from other albums of this era.

Forbidden’s songwriting was also dynamic – with tempo changes and total swings in mood, Forbidden knew how to write thrash with push and pull, hills and valleys. I really don’t think anyone else at the time did it this concisely.

Forbidden ran the gamut of styles on this album that had been introduced in thrash up to the point of its release.  You had your mid-paced melodic songs, your blazing, violent, torrential storms of speed, you had intricate progressive songs, AND IT WAS ALL SO GOOD.  Who doesn’t remember that classic verse riff of “Chalice In Blood”?  Or how about that haunting bass intro to “Off The Edge”?  The power-metal fury of “Forbidden Evil” or the chaos of “March Into Fire”?  Every song on this album is classic, distinctive, and as savage as you’re gonna find.  And the riffs, those fucking riffs.  I love every riff on this album.  It’s like Craig Locicero knew how to speak my language.  It was simply unbelievable.  This album is a metal guitarist’s delight.

To this day, Forbidden is still one of my favorite thrash bands of all time.  And if you didn’t like Omega Wave, this band’s latest release from last year, you have my sympathies.