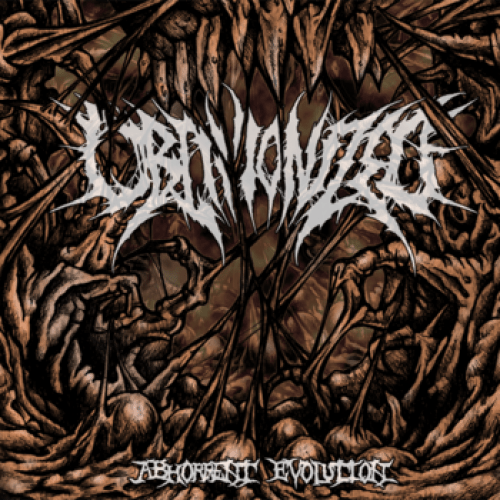 Oblivionized could hardly have chosen a better name for themselves, because that’s how you’ll feel after listening to their debut EP, Abhorrent Evolution. It’s music made for those times when you’re in the mood for head-whipping self-destruction. Fair warning: it’s also the kind of song collection that causes me involuntarily to spew forth a froth of mixed metaphors. So, the English majors in the audience may want to take a sedative before reading further.

This is demonic deathgrind. I listen, and I think about being backed against a wall with a firehose spewing sulphuric acid at full force, straight at my unprotected self. Massively distorted guitars that shriek and crush. Cleaner guitar leads that slither like fat white worms that haven’t had their fill of coring yet. Gut-rumbling bass picking that’s faster than a famished cheetah on the trail of a doomed antelope with blood in the wind.

Bullet-paced drumming that may possibly be the most riveting sound on the whole fuckin’ album. Vocals that sound utterly deranged — a cacophony of shrieking and roaring, the sound of people being torn apart mixed with the gory growls of whatever supernatural things are doing the tearing, and the eating. Abhorrent Evolution is super-charged metal at a hyperdrive pace, a tech-grind portrait of the 7th Circle of Hell, music with the sensibilities of a ravenous demon horde set loose after a milennial imprisonent. And more metaphors. (more after the jump . . .) 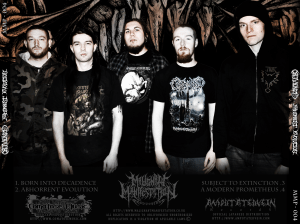 Oblivionized are a five-demon band based in London, where I presume there’s plenty of innocent prey. This EP that’s been coring my cranium was self-released in July 2011 on the band’s Malignant Manifestation label, with distribution in the US on Comatose Music.

And it was mastered by the almighty Scott Hull (Pig Destroyer and Agoraphobic Nosebleed), who knows a thing or two about the vicious arts of musical whoop-ass.

I understand Oblivionized didn’t play a gig until November 2010, but since then have shared the stage with the likes of Deicide,  Belphegor, Hour of Penance, The Amenta, Blood Red Throne, Toxocara, Prostitute Disfigurement,  and Cerebral Bore. You will be judged by the company you keep. By their company, Oblivionized will be judged and sent straight to the deepest part of the fiery abyss, the home to which all good metalheads devoutly aspire.

This is music with flash and weight, tight as a vacuum seal, fast as a storm-driven flood, vicious as a junkyard dog.

Sit yourself down, so you don’t fall over, and put the patented NCS rawhide bit between your teeth so you don’t thwallow your tongue in the event of theizure, and press play:

You can download the Abhorrent Evolution EP for a price here, and their 2008 3-song demo Aroit on this page, for free. Oblivionized is currently working on an album (yippie-ki-yay motherfuckers!). We’ll be watching for it.

To keep track of what the band are up to without paying for a private detective, use their facebook page at this location. Oh hell, here’s a player that includes another song from the EP, but don’t forget the rawhide bit:

5 Responses to “SHORT BUT SWEET: OBLIVIONIZED”