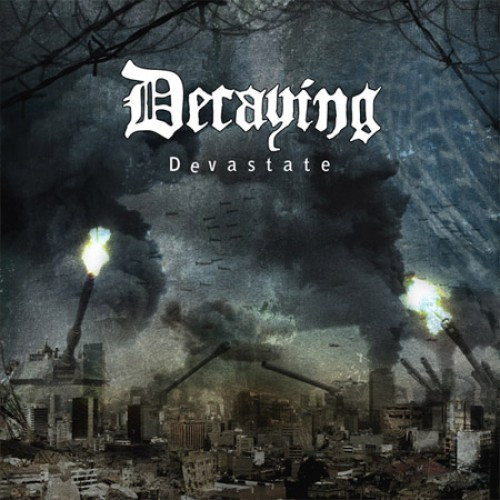 I’m always looking for new death metal played in the old-school style, because few kinds of music push so many of my buttons. I don’t even look for some kind of new spin or tweak, because the whole point of authentic old-school death metal is to be faithful to the hallowed late-80’s and early-90’s progenitors of the genre. But when I do find a band that’s faithful, authentic in their sound, and doing something (extremely well) that’s not commonplace, I really pay attention. And when the band comes from Finland, which is demonstrably the most metal nation on earth (in terms of metal bands per capita), then I’m doubly excited. I’ve got one of those bands for you today.

The band is called Decaying, and it’s only a three-man operation, which provides a hint that the music is likely to be stripped-down and primal. Their debut album, Devastate, was released in May of this year, and it appears it’s being re-released in September by Hellthrasher Productions. It’s a compilation of two Decaying demo tapes, New Order (2010) and The Annihilator (2011). It includes “only” six songs, but it’s not an EP: The running time is 52 minutes, and three of the songs each range in length from more than 11 minutes to more than 14.

Now, add to that information the fact that those long songs are mainly down-tempo affairs, with the band wading through the soul-sucking tar-pit of death-doom. If you’re a fan of monsters like Bolt Thrower and Asphyx, you’ll recognize the style. But 11 – 14 minutes? How, you may ask, does an old-school band like Decaying maintain interest for that long? That turns out to be no problem at all. In fact, I can’t get enough of them. And if you like your old-school death with a heavier foot on the accelerator, don’t worry: The other three songs on the album swing the sledgehammer at your skull with more speed and they’re just as solid as the long ones. (more after the jump . . .)

To return to the first question: How does Decaying maintain interest on those three long songs? Let’s pick “Annihilation” as an example. It’s the one that clocks in at over 14 minutes. The intro is a distorted, guitar-only crafting of morbid atmosphere that slowly layers on the other instruments as the lead guitar establishes a higher-register melodic theme. And then the killer vocals of Matias Nastolin join the grisly festivities. Those vocals are a huge part of this band’s appeal. It sounds like he’s vomiting up his lungs — a thoroughly sick, rancid, extended-range howl that’s like a cross between John Tardy (Obituary), Martin van Drunen (Asphyx), and Patrick Mameli (Pestilence). Nastolin varies his voice to good effect throughout the song. It’s fucking awesome to hear. 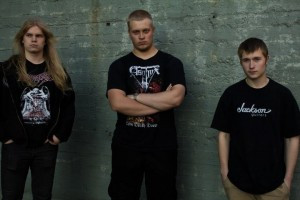 As the song progresses, the tempo changes subtly and the drum rhythms vary, enhancing and then reducing the intensity levels. The lead guitar spins out a variety of alterations on the main melodic theme, and here and there the bass rises in the mix. At the same time, the repetition of riffs and rhythms creates a hypnotic effect, using the very length of the song to pull listeners into the bleak atmospheric murk. Further accents are added by a dramatic narration over a massively headbanging riff/rhythm section — and then near the end, the song accelerates in pace and intensity as the drums drive ahead in a martial attack.

The same astonishing vocal variety marks all the songs, including the shorter, faster ones such as “New Order”. That song is built around an Eastern-tinged melody and includes a couple of brief but absolutely scorching guitar solos. The song as a whole is like a headlong flight of demons hungry for blood, swirling up out of the earth in an overwhelming rush.

What’s particularly remarkable about this very strong debut is the relative youthfulness of the band. When I listened to the music, I imagined guys in their 30s or even older, musicians who’ve been laboring in the underground for many years, honing their instrumental chops and their songwriting skill. But then I saw the photo on this page (which actually reflects one change in guitarist since Devastate was recorded). All I can say is that, at least musically, these dudes have old, evil souls and maturity beyond their years.

I can’t resist the temptation to put up two songs for streaming — the two that I used as examples above.

You can order a CD version of Devastate directly from the band for a price of 8 Euros plus less than 2 Euros shipping by messaging them at decayingmerch@gmail.com, or you can order it from Dark Descent Records at this location. I’m happy to report that Decaying are wasting no time following up on Devastate. According to their Facebook posts, they’ve written 10 new songs for a second album to be called Encirclement and are recording it now for a planned release later this year or early next year. Speaking of Facebook, you can find the band there via this link and listen to more songs.

Oh, what the fuck, I found this Soundcloud player that will let you stream the whole damned album. Go for it — I hope you dig Decaying as much as I do. If you do, go to Facebook and give ’em some like.