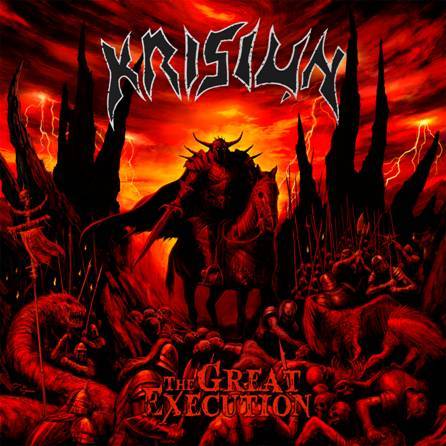 I doubt I’ll be able to continue doing this on a regular basis, but for the third day in a row, here’s a round-up of news I saw and music I heard today that I thought were worth sharing.

It’s been three years since Krisiun released Southern Storm, and that’s far too long to wait for another slab of death metal bestiality from these Brazilian kings of the genre. Today’s wonderful news is that Krisiun will be releasing their eighth studio album, The Great Execution, on October 31 in Europe and November 1 in North America via Century Media Records.

A press release explains that the album “musically expands Krisiun’s trademark high-speed death metal violence with a heavily increased amount of diversity ranging from extreme tempo variations over distinct rhythm patterns to clean guitars and even Flamenco parts!” In addition, “Krisiun only used analog gear and instruments this time to avoid the compressed sound that so many musicians produce today. This wise decision resulted in a more organic sound, with the songs on The Great Execution possessing both warmth and rawness, which are so often lost through digital production. The low end is deeper, with drums that pound instead of bounce and guitar tones that sear rather than hiss.”

That just sounds fuckin’ peachy, don’t it? And what about that album art up above, by by Japanese artist Toshihiro Egawa (Suicide Silence, Heaven Shall Burn, Devourment, Dying Fetus)? Metal As Fuck.  (more after the jump . . .)

Since Krisiun is on my mind, here’s a video for the song “Sentenced Morning” off Southern Storm. Face-peeling tech-death don’t get much better than this. 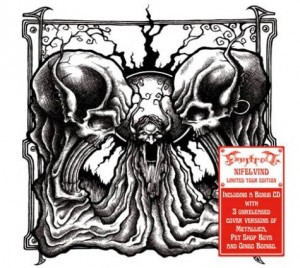 Back in the day, before I purified myself and began listening to metal 99.9% of the time, I used to listen to Oingo Boingo, that fun-loving, slightly unhinged pop-punk band fronted by Danny Elfman, who of course has gone on to fame and fortune as the Oscar-nominated creator of movie scores. So guess who is covering an Oingo Boingo song on their next release? Finntroll. Uh huh, that’s not a typo.

Back in the day, I also used to listen to Metallica. Okay, I still do every now and then. Guess who’s covering Metallica? Right again — Finntroll.

I can sort of imagine a Finntroll cover of Metallica’s “The God That Failed”, but my imagination fails me on the other two. The idea is just as weird as that news we reported earlier this week about Anaal Nathrakh covering a ska song by The Specials. But, of course, since Finntroll is purely awesome, I of course am anxious to hear what they do with these covers. I am perhaps even slightly more anxious because of this statement by Finntroll’s Henri “Trollhorn” Sorvali about the band’s decision to cover Oingo Boingo’s “Insects”:

“Because we don’t know how to play funky horn sections, we replaced them with Kazoos and various squeaky bladders. And instead of slap bass, we slapped the crap out of various ethnic percussions.”

The three cover songs will be included on a special tour edition of their last album, 2010’s Nifelvind. The tour album will include 2 CDs plus the new artwork you see to the right. It will be released near the end of this month in Europe, and fans in North America can purchase the CD at www.cmdistro.com. Oh hell, I feel compelled to play those first two songs Finntroll is covering, just so you can get confused, too:

In the racetrack of my mind, this band and Fleshgod Apocalypse are neck-and-neck in the sweepstakes of Italian death metal. I’ve said before that the band’s 2010 album Paradogma was one of the best releases of 2010. They’re one of those bands whose new music I’ll buy without hearing it, because I’m confident it will be good.

Today I saw the welcome news on HoP’s Facebook wall that they’re recording a new album for release in 2012 and that a live video of the band performing a new song, “Sedition Through Scorn”, has now become available on YouTube. The audio isn’t great, because this is a fan-filmed clip, but it’s good enough to make me say (excuse me a second while I clear my throat . . . ugh . . guh . guhg . .ugh . . .

11 Responses to “IN THE NEWS AND IN YOUR EARS: KRISIUN, FINNTROLL, AND HOUR OF PENANCE”