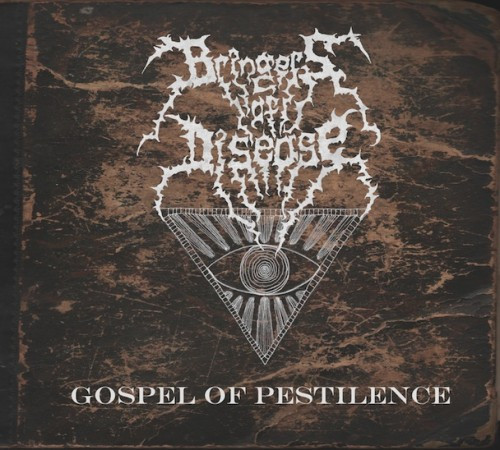 For new readers and older readers who have memory deficits: We maintain a running list of bands whose music we’ve never heard. Most of the bands on the list have written us with requests that we check out their music. We add other bands to the list based on reader recommendations or things we’ve read. Most of the bands on this list have no label affiliation. When time permits, I pick two or three names off the list, listen to one or two songs from each band, and then write about the experience in these MISCELLANY posts. I also include the music I heard, so you can make up your own minds about whether the bands are worth exploring further.

Sometimes I cheat on the rules of this game and listen to more than one or two songs. I then punish myself for cheating by, for example, listening to indie rock or rap. Or something by Kamelot.

Today’s picks, as usual, turned out to be a varied lot: gritty black metal from Bringers of Disease (US-Ohio), groove-heavy thrash from Rezistor (Romania), and prog-minded death metal from Eldergaad (U.S.-Minnesota). You’ll have to set aside a solid chunk of time for this post, because it’s not a short one, but all the music is worth some serious attention. Here we go — after the jump: 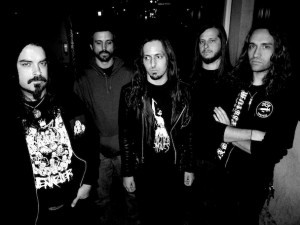 I read about this band’s four-song debut EP, Gospel of Pestilence, back in June of this year. It got a lot of hype — a full stream on Noisecreep, a review in DECIBEL, fawning praise in a variety of metal blogs, but although I added it to the MISCELLANY list, I didn’t immediately listen to the music. Undoubtedly I was distracted by something important, like a passing car. But as I scanned over the list yesterday, the name jumped out at me again.

The music did, too — jumping like a panther on some helpless marsupial. Gospel of Pestilence is intense music, with all the claws and teeth bared, predatory nature in full bloom, but without pretense or complication. It’s gritty, street-level black-metal brawling, the kind that floods the senses with tremolo-ed waves of minor-key melody but viciously snaps your neck with booming rock-rhythm chords, judiciously placed bass tones that almost take over the melodic lead in the songs, and unexpected breaks in rhythm and decibel levels.

Yessir, I violated the MISCELLANY rules and listened to one song after another, and I’m here to tell you that all four songs are distinctive, all four worth your time — from the hornet-swarm of opener “Dooms To Flame” to the narcotic dream that begins the closer, “A Plague To end All Plagues” — before the vertebrae-popping hammer blasts begins.

This is one of the coolest, most neck-snapping outbreaks of black metal I’ve heard this year. The following song happens to be my favorite among four strong contenders; it incorporates all the stylistic variety the EP has to offer. It’s the kind of song I’m easily going to stick on personal playlists, because I want more of it. Fucken cool song title, too.

For those who want more data, I’ll mention that this group includes members of Mouth Of The Architect and Acheron. If I’d known that last June, I wouldn’t have fucked around before diving into this music. For still more info and news, visit Bringers of Disease on their Facebook. The EP is available on Amazon mp3 and iTunes, and you can order the CD from Translation Loss Records here. We do get a flood of promos here, but I paid for this motherfucker and I’d pay for it again. 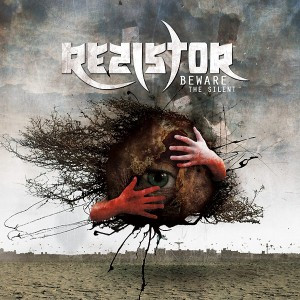 I found out about Rezistor, a band based in Constanta, Romania, through an e-mail from the band. They self-released their debut album, Beware the Silent, earlier this year in a limited release, but recently decided to spread the music far and wide by putting it up on Mediafire for free download — and bravo to that, by the way.

I decided to sample Beware the Silent by launching the first song, “Go Away”. What I got was a blast of biker thrash, loaded up with catchy-as-fuck riffage and throat-clearing vocals gargling up evilicious lyrics (which for some reason reminded me of Wayne Static of Static-X — and yeah, I still have good memories of Wisconsin Death Trip). I’m not the biggest fan of new-era thrash, but this shit got my head slamming and made me want to bellow along with vocalist Eugen Ranga.

Well, the song was really just too damned infectious to stop there, so I moved right into “Enough”. At this point I did start yelling along with the one-word chorus, which scared the pee out of my cat. I think I pulled a ligament in my neck, too. By the time the third song (“Unbound”) was in full swing, I’d damaged some of the furniture and my cat had climbed most of the way up the wall by his claws.

These dudes have got a way with gut-level, groove-heavy, riff-strewn mayhem, and I’m going to move on to the rest of the album after I finish this post and sedate my cat. Check out “Go Away”, and I’m throwing in the fourth track, too (yeah, I didn’t stop at 3), because it’s such a filthy piece of blackened stomp.

You can download individual songs from Beware the Silent or the whole album from this page, and you can learn more about Rezistor (and show them some like), by following this link to their Facebook page. 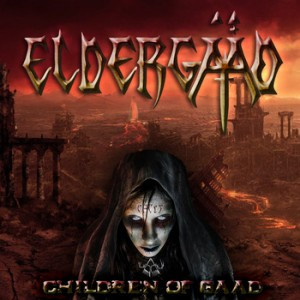 We found out about Eldergaad via an e-mail from the band, and learned that they have recently released their debut album, Children of Gaad, for distribution through the Bandcamp platform. The album cover is a nice one — colorful and suitably creepy — and that helped tempt me into picking this band for today’s MISCELLANY experiment.

I decided in advance to pick two songs from the album. The first was the opening cut, “Cult of the Void”. It’s almost six minutes long. Early on, a swirling lead guitar establishes a down-tempo, Eastern-sounding melody over a pounding rhythm, with rancid vocals shrieking the lyrics. But at about 3:30, the song changes gears and morphs into a speedier, thrash attack — but one that includes a segment of pulsating interplay between the lead guitar and the bass, before the song returns to a reprise of the down-tempo beginning.

For the second song, I jumped forward to the sixth track, “Nocturnity”, just because I liked the song name. It’s a polyrhythmic jolt, quite different from the opening track. Lots of tempo changes, inventive drum progressions, winding minor-key guitar melodies, and a slow collapse about two-thirds through into a repetitive chug-heavy rhythm before a surging finish with a flashing guitar solo. There are aspects of jazz-metal in this song, quite different from what I was guessing would come, based on “Cult of the Void”.

Given the stylistic divergence between the first two songs, I decided to just hang in there and see what happened with “Eternity At A Glance”, the even longer song (8:46) that followed “Nocturnity”. Fuck, the caterwauling dual-guitar intro alone would have been enough to sell me on this baby, but lots more sweetness followed it — passages that reminded me of Devin Townsend’s harder-edged recent output (and vocalist Raa sounds more than a bit like DT in harsh-vocal mode), extended prog-metal instrumental segments, Meshuggah-inspired rhythms, and a periodic repetition of that oh-so-cool intro. One hell of a song — and it’s the one I want you to hear:

[audio:https://www.nocleansinging.com/wp-content/uploads/2011/09/Eldergaad-Children-of-Gaad-07-Eternity-at-a-Glance.mp3|titles=Eldergaad – Eternity at a Glance]

If you’re looking for inventive, prog-minded death metal that’s both technically sophisticated and crushing, Eldergaad is well worth your time. To stream more songs from Eldergaad and buy the album if it suits you, their Bandcamp page is the place to go. Their Facebook page is at this location.

I’m afraid I have a Kamelot stomach-pump ahead of me, followed by a Shins suppository, for repeatedly violating the MISCELLANY rules, but it will be worth it. This was some good listening. Let me know what you think of today’s line-up.

5 Responses to “MISCELLANY NO. 36: BRINGERS OF DISEASE, REZISTOR, AND ELDERGAAD”