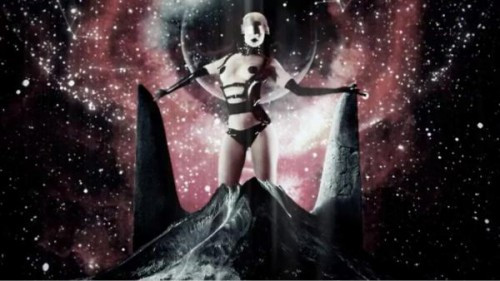 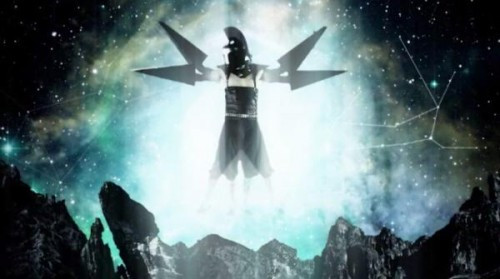 Nightfall is a Greek metal band whose most recent album was released by Metal Blade in August 2010. Called Astron Black and The Thirty Tyrants, it’s a worthwhile pantheon of blackened melodic death metal. Shortly before the album’s debut, we featured a unique music video that had been created for the song “Ambassadors of Mass”. Definitely not your usual metal video fare, it depicted scenes from the 5th century war between Greece and Persia using nothing but images of shadow puppets. 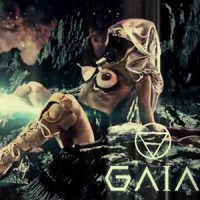 That apparently didn’t exhaust the imagination of the band or Achilleas Gatsopoulos, the Berlin-based director who was responsible for the “Ambassadors of Mass” video. Today, Metal Blade premiered a video for another song off that 2010 album, “Astron Black”.  It’s not your typical metal video either. This one integrates live actors into a digital environment to tell a medley of stories from ancient Greek mythology. But the gods and their creations, though set among the planets and stars, look like something out of a Lady Gaga stage show, with gleaming metallic armor and protruding, uh, . . . nipplage.

There’s enough skin showing in this video, not to mention a quick shot of a celestial knob-job, that it probably qualifies as NSFW. But it’s definitely fun to watch, and the song — like all the others on this album — is a nice slice of headbanging fun, too.  Check it out after the jump, along with a detailed description by Achilleas Gatsopoulos of the imagery used in the vid.

And here are the comments from director Achilleas Gatsopoulos:

“We decided not to go safe and continue with the shadow puppet approach for the second video too, even though there is still a lot of space for experimentation within that. Instead, I  came up with an entirely different style that would add yet another facet to the complex task of visualising Nightfall’s music.

Working with the lyrics and with Efthimis conceptual guidance, I  set up a vast backdrop of space and time for our characters to inhabit, incorporating various planetary and astronomical elements. The characters include mythical deities such as Gaia, Prometheus, Venus / Pandora, as well as Astron Black, who symbolises mankind and its progress through time.

The video  also incorporates Pandora’s myth from Hesiod’s Theogony. Gaia gives birth to stars and deities, to Prometheus. Prometheus stole the fire (also a metaphor for knowledge and practical thought) and gave it to man. Zeus punished Prometheus by binding him to a rock where the great eagle would come and eat his intestines every day. As an act of revenge on mankind, he creates Pandora, the first woman. Here we present Venus Pandora, who also posseses the power of sexual desire over man. Her curiosity proves fatal, as she opens the urn bestowed to her by the Gods, unleashing all evils upon mankind, leaving only hope inside.

The style of the video brings together various elements such as stylish costumes, live action footage and CGI, adding a modern approach to the ancient but timeless imagery of our characters and situations. I truly believe that once again we managed to successfully recreate and enhance the lyrical and musical themes and create something unique that will stand the test of time stylistically.”