Because of our trip to Portland last weekend to take in the awesomeness of the SUMMER SLAUGHTER tour (for the second time), I didn’t have time for my usual weekly foray into the interwebs looking for new metal.  I’ve been catching up since then and I’ve made enough headway to warrant another installment of this MISCELLANY series.

For new readers, here’s how this thing works: I randomly follow up on e-mails we get here at NCS, or MySpace “friend” requests, or demos that come in the mail, or tips we get from readers, or blurbs that catch my eye on metal sites like Blabbermouth — and I listen to the music or watch a video. Most of the time, I don’t know in advance what the music will be like, or whether it will be good, bad, or just meh.

And then, in this post, I dutifully write up what I found, without filtering out anything. I’m usually pretty lucky in finding new music that’s worthwhile, but there are no guarantees, for me or for you if you choose to read along.

Today’s grab-bag of listening and watching included offerings from Enos (UK), Nightfall (Greece), Anachronaeon (Sweden), Against the Plagues (multinational), and Shades of Dusk (Canada). It’s kind of a long post, but here’s a top-level hint — the music is divergent in style, but everything I heard was very sweet. No filler, all killer. So stay with me.  (explanations, music to hear, and videos to watch, after the jump . . .) 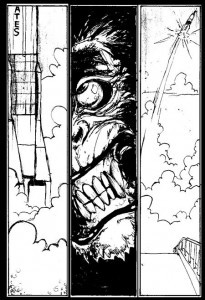 The first band I checked out is a UK collective called Enos, who’ve just released their debut album, Chapter 1. Why Enos? Because I got a PR piece by e-mail that included the following explanation:

“The concept behind Enos is telling a story; Enos was the last chimpanzee the Americans sent into orbit during the space race. When he returned to earth, people commented that he was ‘like a different chimp.’

Taking this idea, the band have produced an album based on the journey Enos undertook, also collaborating with artists to create a comic book of the same story. While Enos was in space he discovered a worm hole which not only sent him back in time but also made him more intelligent.”

Maybe you could have resisted that come-on, but I sure as hell couldn’t. I feel like a different chimp every day, and as far as I know, I’ve never been through a wormhole. Also, Enos has made the album and the comic book available for free download, and I’m a sucker for legitimately free music. 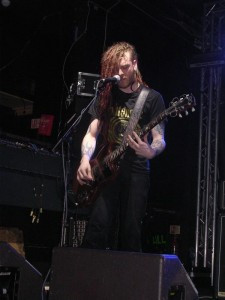 I only listened to the first track on the album, which — as you might expect if you were paying attention to that press release — is called “Launch”.  It’s definitely not the kind of music we usually cover at this site, in part because it includes clean singing, albeit a grizzled kind of vocalization. Some people might say it’s not even metal at all. But I really dig the shit out of this song.

Don’t be deterred by the guitar-generated noise at the beginning of “Launch”, or the sludgy-stoner instrumental that follows it, because at the 2-minute mark, this song takes off. It’s bluesy, and psychedelic, and heavy, and it ends with an extended guitar solo that bleeds and moans and howls. I’m definitely going back to listen to the rest of this album.

Here’s “Launch” for you to hear, and if you like it, you can download the whole album at the Enos Bandcamp page or you can download the album plus the comic book by going to this location (scroll down when you get to that page and you’ll see how to do that).  Enos’ MySpace is here. 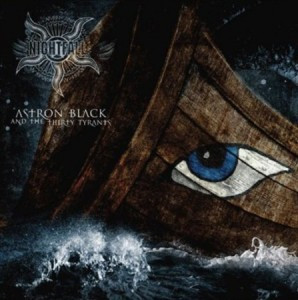 For my next stop, I decided to check out a brand new video from a Greek band called Nightfall that I’d seen a new blurb about. This is a bit of a cheat, because I know Nightfall’s music and I’ve enjoyed some of the band’s previous releases. But when I saw the news about the video, I couldn’t resist.

The video is for a song called “Ambassadors of Mass”, which is off Nightfall’s new album, Astron Black And The Thirty Tyrants, scheduled for release on August 31 (one day earlier internationally) via Metal Blade Records.

The vid isn’t your usual metal-video fare. It depicts scenes from the war between Greece and Persia in the 5th century B.C. — and the entire video consists entirely of images of shadow puppets. The video was made by a dude named Achilleas Gatsopoulos, who lives in Berlin, and the design and construction of the puppets were done in collaboration with an artist named Hara Kolaiti.

According to the press release I saw, more than thirty meticulously detailed puppets and backgrounds were created for the video, and they were then shot one by one and integrated into scenes digitally. Pretty damned cool, as you’ll see.

My only complaint was with the English-language subtitles, which I found distracting and not really necessary since the lyrics are already in English and you can hear them pretty clearly.

Oh yeah, the song rocks, too. And so does the album cover up above. 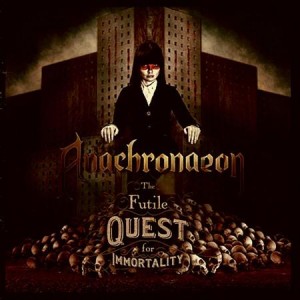 After I watched that cool video, I decided to check out a two-man Swedish band with the one word, five-syllable name of Anachronaeon. I found out about them from a fellow metal blogger named Niek, who runs a cool site (with a number of other international collaborators) called Death Metal Baboon. He e-mailed us to recommend this band, and we also checked out his review of Anachronaeon’s new release (their third full-length), Futile Quest for Immortality (here).

So, this stop on my exploratory tour wasn’t exactly a shot in the dark either, because I knew what Niek wrote about the music, e.g., that it’s a “deeper”, “darker”, “serious” form of melodic death metal, but not as “despairing or cruel” as many black metal albums.

I listened to two songs from the new album, “Futile Quest” and “Ages Ago” — and Niek pretty much nailed it. This is blackened, old-school melodic death metal, with a pagan-metal vibe in “Ages Ago”. It’s fast, with blazing guitars and a mix of nasty death growls and clean singing.

The production was startling to me, because the drums are so muffled; in fact, the whole bass end of the spectrum is subdued in the mix, as compared to most melodeath, which I guess is one reason I’m calling this “blackened”. But the songs are really good, and I’m looking forward to hearing the rest of the album. Here’s “Ages Ago”:

Anachronaeon’s web site is here. I especially enjoyed this message, which followed links you can use to order the music legally (i.e., for money):

“And of course you can always illegally download that which we have put so much time and energy to create and never let us know that you apprechiate Anachronaeon’s existence. Then you can brag to your friends that you actively contributed to the end of this band. Thanks a lot!” 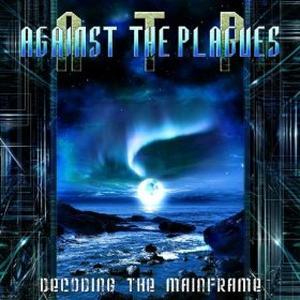 After I listened to Anachronaeon, I decided to check out another music video I saw on Blabbermouth, this time from a band I hadn’t heard before. Against the Plagues appears to be based in Chicago, but features an international cast of characters, with members who currently play, or have played, with Lost Horizon, Luciferion, Damnation, Forest of Impaled, Vex, Malevolent Creation, Divine Empire, and Kult of Azazel.

The band’s first official album release, which debuted earlier this year, was called Decoding the Mainframe, and they’re in the process of writing a second album’s worth of songs, with plans to start recording next month. The debut includes 8 songs from a previously self-released CD called Architecture of Oppression, but all the songs were re-mastered and mixed by Dan Swanö (who was the subject of lots of comments in yesterday’s post).

Back in April, the band released their first official video for a song from that debut album called “Great Are the Eyed”, but I just watched it yesterday. The video itself consists mainly of the band performing, with occasional insertions of disturbing images — but, oh shit, the song! The song is some extremely sweet, Behemoth-style death metal, with expertly placed synthesizers to lend a symphonic air to the pummeling.

Not that I don’t have more than enough new music to listen to, but I’m afraid the list just grew by one album. Check it out: 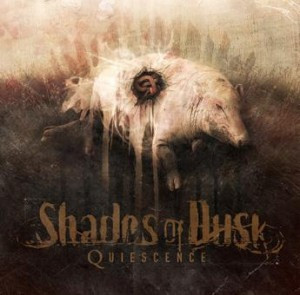 This next band I made a note to check out was based on the recommendation of Todd Douglas from Montreal’s Incarnia. If you don’t know who Incarnia is, you can read all our gushing about them here.

One of the songs on Incarnia’s new album is called “Yersinia Pestis”, which is the name of the bacteria that causes the plague. We went all crazy over that song, ran a contest about the lyrics, and found out that Todd is majoring in microbiology and immunology. We thought that was pretty fucking unique — y’know, as members of extreme metal bands go, and we said so.

In response to which, we got this comment from Todd:

“Actually, if you know the band Shades of Dusk, another metal band from Montreal, the bassist of that band graduated from the same program as me from McGill University in 2008, so make that a list of 2!”

So, of course, I had to check out Shades of Dusk, just on the off-chance that someone in a bar would bet me that I couldn’t name two metal bands that include people with microbiology degrees. Like that will ever happen. The bar bets I usually get are more along the lines of, “I bet you can’t make that beer come out of your nose a second time!”

Anyway, Shades of Dusk have two albums to their credit, a 2006 release on Galy Records called Caress the Despair and a 2008 release called Quiescence on something called Prodisk Records.

I ventured over to the band’s MySpace page and listened to two songs from Quiesence, “Sophisma (Red Rationale)” and “Bipolar Incognitus”. And may I say that I’m very fucking impressed? Well, I believe I just did.

“Bipolar Incognitus” is fast and blistering, with furious fretwork, machine-gun drumming, and a riveting mix of death growls and hardcore howls. “Sophisma” erupts in similar fashion, punctuated with massive bass drops and a bridge of feedback and demented vocal nattering. But the last minute of the song is a slower-paced, ominous melody of ringing guitars and pounding drums. Once again, I have no choice but to make time for the rest of this album. Just too damned cool to pass by it.

Two songs from Shades of Dusk’s first album, Caress the Despair, can be downloaded for free here. The more recent album, Quiescence, can be ordered from Amazon, or less expensively from CMDistro. And here’s “Sophisma” for your listening pleasure. Perhaps more metalheads should study microbiology.

P.S.  We swapped messages with the band, and learned that Shades of Dusk’s resident immunology/parasitology graduate is actually guitarist Louis-Philippe Leroux and that the band is busy writing for their upcoming third album. I’m still hoping for a song about necrotizing fasciitis.

Well, that’s it for today’s MISCELLANY. I’ve still got catching up to do, so odds are I’ll be running another one of these posts this weekend. Have a wonderful fucking day.