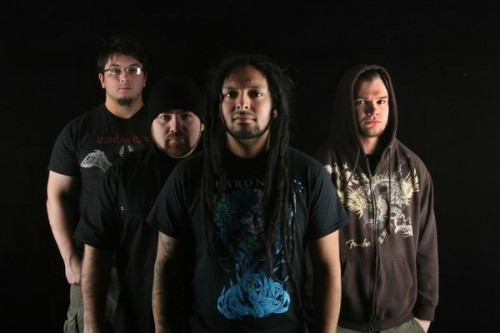 Imagine that Dr. Frankenstein woke up after a bender one morning and decided to stitch together pieces of Lamb of God, Exodus, Atheist, Black Dahlia Murder, and maybe the pancreas from Hatebreed. Throwing the switch to charge his creation with life-giving power, the good doctor would then stand back in amazement as the powerful creature climbed off the operating table and began to rage. And it would sound something like a Connecticut band called Guerra.

Guerra released its debut album, Transmissions Through Oil and Blood, back in April, but we only discovered it recently. That debut release was preceded by hard years of playing live shows, including opening for some heavyweight names, and working on the songs that have now been collected on that album.

We could have picked a different collection of bands for our Frankenstein metaphor, and to be clear, we’re not saying Guerra is yet in the same league as the bands we mentioned.

What we were trying to convey is this: Guerra succeeds in pulling together a diverse range of metal styles, and doing it in a way that seems natural and unforced, to produce music that’s both engrossing and massively ass-kicking.  Needless to say, we do like it, a lot.  (more after the jump, including Guerra music to hear . . .) 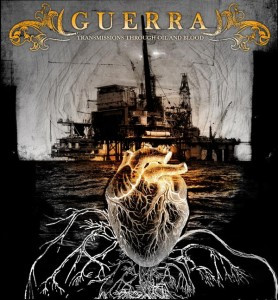 That Exodus reference was an attempt to capture the thrash-paced speed of most songs on Transmissions, plus some other recognizable elements of the genre, but this really isn’t straight thrash — not by a long shot.

For one thing, Guerra loves to jolt its listeners with rapid tempo changes, and even drops way down into a merciless crawl (as on “”Winds of Tomorrow’s Empty Promise”). For another thing, the bass and rhythm guitar generate a perpetually fuzzed-out, heavily weighted form of cannon-fire bombast — not as down-tuned as old-school death metal, but plenty thick.

And for yet another thing, there’s the wonderful variety in the lead and rhythm guitar work: big, heavy pounding chords; darting, pulsating, swirling, and shrieking leads; jolting, stuttering, start-stop rhythms; and good old-fashioned chugging — not to mention the flashy, tech-metal, bounding-about on the frets that’s a feature of almost every song.

The guitar solos (most of which are spun out in wizard-like fashion by Chris Vaca) are also attention-grabbing, and Transmissions includes plenty of them — even a slow, soulful, dual-acoustic instrumental in “Anesthesia”, accompanied only by the periodic rushing sound of a harsh wind. 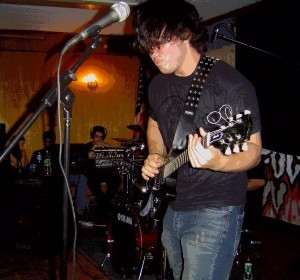 If that’s not enough variety for you, how about some  big, hardcore breakdowns on “Dark Woods Cometh” and “Winds of Tomorrow’s Empty Promise”?

The hardcore influence isn’t only felt in those breakdowns and in some of the vocalizations (which we’re coming to). It’s also emergent in the serious, politically charged lyrics, which are unusually articulate and eloquent (and one reason to grab a physical copy of the CD).

We said we would come to the vocals, and so we have. As technically accomplished as the instrumental work on this album is, Mike Corredor‘s vocals are equally wide-ranging and powerful. There’s a lot that’s reminiscent of Randy Blythe, plus honest hardcore howling and some impressively deep death-metal growling. The dude’s vocals are as hard-hitting as his guitar playing, and with equal amounts of heart. 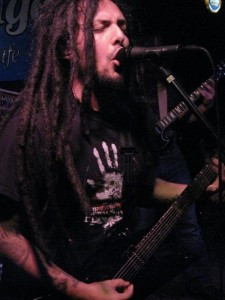 We didn’t include any prog-metal references in our Frankenstein metaphor, but hell, there’s some of that in these songs, too — particularly in the second of two instrumental tracks on the album, “A Glimpse Into Perspective” — which at 2:15 was way too short. It’s a way-cool instrumental jam that easily could (and should) have been three times longer.

So, how do you pick a song to feature from an album that’s so diverse, when no one song is really representative of the rest? The answer is that you can’t pick any one song from this album that stands for all you hear — which in this case is a good thing. And fortunately, we found a widget that will let you hear some of the other shades and phases of awesomeness that the album has to offer, which eases the selection pressure a bit. With the pressure off at least a little, we pick this one:

You can buy the physical CD or download a digital copy of Transmissions Through Oil and Blood at CDBaby, and you can get the digital music at iTunes and Amazon, too.

More info about Guerra is available at their MySpace page (here). And now here’s the band’s ReverbNation widget with more songs from the new album. Hope you like it as much as we do.