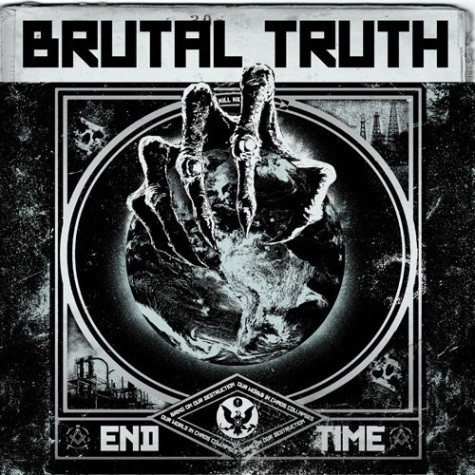 (This is a grindcore kind of review (very short, borderline demented) by TheMadIsraeli of a grindcore album by one of the ancestral kings of grindcore, Brutal Truth.)

But no, seriously. Brutal fucking Truth? You bet your ass this album rules. A review of this thing is entirely pointless because I’m pretty sure that in order to dislike Brutal Truth you have to be lacking the metal gene and possess instead the I-listen-to-Design-The-Skyline-and-masturbate-to-tranny-porn gene.

What can I say? Well, it’s a throw-back to the quirky style of grindcore they pioneered on their sophomore release Need To Control. As in, it’s a throw-back to an album FILLED THE FUCK WITH FUCKING AWESOME. I mean, these guys are playing so savagely the music sounds like it’s going to fall apart and turn into total shit any minute, performed with such wild abandon, it’s like being shot at with a mini-gun that shoots nothing but sewing needles straight at you at 1000 rounds per second. Like being bombarded with trebuchets hurling bags of sledgehammers at you. LIKE DESTROYING THE FUCKING PLANET WITH YOUR MOST PRIMAL OF SCREECHES! Oh yeah, Kevin Sharp still has it by the way. (more after the jump . . .)

I mean seriously, old school? Check. Fast? Check. Grimy and messy? Check. Loud as fucking shit? Check the fucking check. Listen to the songs and evaluate for yourself.

EDITOR’S NOTE: In addition to the songs TheMadIsraeli is featuring below, “Gut Check” is streaming courtesy of a track premiere at Lambgoat.com, and you can also download the recently-released “Fuck Cancer” via Metal Maniacs. These latest premieres are in addition to other tracks from End Time that have appeared via Metal Hammer Germany, A.V. Club, Noisecreep, Sick Drummer and the band’s own Facebook page, some of which you can hear below. Pre-orders for End Time are now available at Relapse.com.