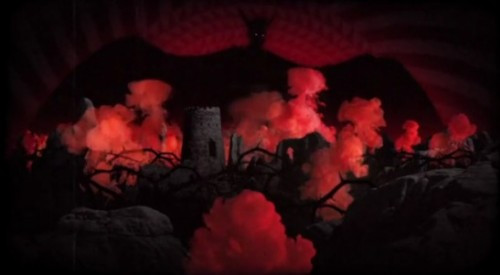 Most of the time I act on impulse and the rest of the time I over-think things. Yesterday or the day before, both Mastodon and Opeth released new music videos for songs from their new albums. I had already posted new videos yesterday from The Devin Townsend Project and Dark Tranquillity, but because Mastodon and Opeth don’t use the initials “DT”, I decided to skip them.

Actually, I decided to skip them because, by the time I found out they had been released, I figured that anyone who cared about those bands had already seen them via some other metal blog or elsewhere. I think that qualifies as over-thinking things. Both videos are good, some people who visit NCS don’t read other metal blogs, and just because I was going to be late to the party doesn’t mean I should ignore the party, so . . . both videos are now viewable the jump.

Mastodon’s is for a song called “Curl of the Burl”. The song is okay, with a nice stoner riff running through it, but it probably isn’t going to join my list of Mastodon favorites. The video is freaky to watch, though. I especially liked the boobs shining as bright as headlights. And if anyone can figure out what that backwoods cretin is snorting in his cabin, please clue me in.

Opeth’s video is for “The Devil’s Orchard” and, like the Mastodon video, it appears to be a drug-induced dream. Some of the psychedelic images are cliched, but the video as a whole is still very well done and fun to watch, and it complements the song quite well. I just wish I liked the song more.

7 Responses to “FOR THE SAKE OF COMPLETENESS: THE NEW MASTODON AND OPETH VIDEOS”