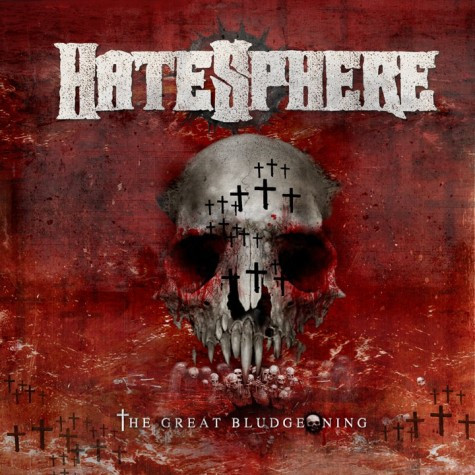 (TheMadIsraeli has been a reviewing machine lately, and here’s his assessment of the new album by Denmark’s Hatesphere., which is out now on Napalm Records.)

Hatesphere.  One of my favorite bands of all time.  How anyone could develop the capacity to dislike this Danish deathrash legend is ENTIRELY beyond me; they produce some of the sickest riffs, melodies, grooves and overall bewildering sonic assaults of any band in their genre niche.

I was NOT a fan, however, of their previous album To The Nines.  The band had lost its signature lineup, including favorite vocalist of mine Jacob Bredhal, and while the true core of the band remained in founding guitarist Pepe “Lyse” Hanson, the new line-up he’d aquired just… wasn’t working.  At all.

Now we’re here at the new Hatesphere album The Great Bludgeoning.  New musicians in hand, specifically a new drummer, vocalist, and bassist, and I’m happy to say this album has undone the bad taste To The Nines left in my mouth. 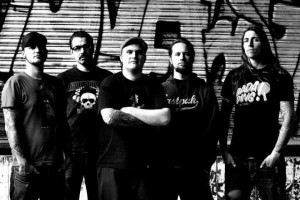 “The Killer” begins with a classic, Hatesphere-style, thrashy, thick, octave-spanning riff with some classic melodeath sensibilities in it and then moves into a badass verse riff that reminds me a TON of old school Anthrax — but with deathrash vocals over it.  The song is a short, three-minute kick in the teeth, only conditioning you for what is about to be a brutal ride.

The calming acoustic intro of “Venom” lulls you into a false sense of security, and a distorted reprise of the intro is then followed by full-speed-ahead, Dark Angel-like technical blitzkriegs.  THIS is The Great Bludgeoning.  THIS is Hatesphere — a non-stop, ball-peen hammer to the skull and throat.  NO FUCKING MERCY.

“Smell Of Death” doesn’t do much to alleviate the pressure either, only launching into a faster tempo than the preceding song, with fierce, triplet-laden meat grinders called riffs.  “Decayer” is a slower but poignant, precision-aimed affair of a more melodic sort.  It reminds me a lot of something you’d hear off of their album Bloodred Hatred.  It’s a nice showcase of the band’s melodeath influences.

“The Wall Of My Threnode” is a short instrumental, a dark clean piece that suggests you may not yet lose your life to this music.  You have no choice in the matter, though, as “Resurrect With A Vengeance” denies you your right to choose and grinds you into the ground with grooves that filet your helpless self into tiny bits.  Just when you think you can’t withstand any more punishment, the song launches into a speed run showcasing some epic pedal-point riffage.  You’re too weak to withstand this.  You know it.

The title track, “Need To Kill”, and “Devil In Your Own Hell” wrap the album up nicely.  A furious whip-lasher, a stomping groover with attitude, and a straight-up, no nonsense thrash-fest.

EDITOR’S NOTE: The Great Bludgeoning was released by Napalm Record yesterday in North America. The album was produced, mixed and mastered by Tue Madsen (The Haunted, Sick of It All, Moonspell, Dark Tranquillity), and the awesome cover artwork was created by Mircea Gabriel Eftemie, who has previously worked with Soilwork, Strapping Young Lad, and Mnemic (for whom he also plays the guitar). You can find out more about Hatesphere at their Facebook page.

Now, here are four tracks from the album that TheMadIsraeli wants you to hear: