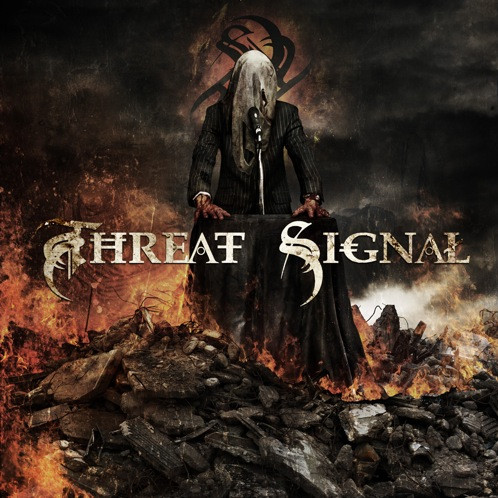 (TheMadIsraeli reviews the new album from Canada’s Threat Signal, calling it “one of the best albums of the year”, and then after the review we’ve got two songs and three videos — including a solo that Threat Signal guitarist Travis Montgomery composed for one of the new songs by . . . Textures.)

Total reinvention.  It’s rare to see a band do this, and it’s even more rare to see a band do this and have the result turn out better than the original product.  Not only did Threat Signal suffer a huge blow to the line-up, vocalist Jon Howard being the only member left from the Under Reprisal crew, but although their sophomore album Vigilance was good, it didn’t do so well in the realm of public opinion.  It killed all the steam generated by their debut — and before Vigilance, they had been in a position to come out, kick ass, and kick ass even harder with material that bested their debut.

So where did this leave Threat Signal?

This band stayed relatively quiet for the longest time until this video cropped up: (after the jump . . .)

Seven-string guitars, Youtube musician sensation Chris Feener on guitar, and drum master Alex Rudinger in the fold, and a heavy dose of FUCKING THRASH METAL.  This is exactly what this band needed.  I think everyone who saw this video was frothing at the mouth for more, waiting for SOMETHING to happen.  Well, their third album (self-titled) will be coming out soon (October 7 in Europe and October 11 in North America, on Nuclear Blast), and I’m here to tell you this is one of the best albums of the year.

It’s obvious from second one of opener “Uncensored” that this is not the Threat Signal of Under Reprisal or Vigilance by a long shot.  The guitars are much more technical, much more riffy, and less groovy; and the drums are much more intense, with machine-gun double-bass and overall fast, precise fills and attacks.  Jon Howard’s vocals remain the only familiar element.  “Uncensored” has potent groove no doubt, potent stomp-your-face-the-fuck-in groove, with Fear Factory machine-gun-precision jackhammering.

“Comatose” wastes no time in its following up, bringing in a thrashy mid-paced assault of start-stop riffage and some djent hints sprinkled throughout.  You’ll be thinking, “This album is pretty fucking sweet”.  YOU DON’T KNOW SWEET YET. 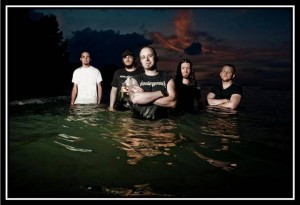 “New World Order” is where your balls will be ripped off and forced down your throat.  The epic intro with the heightened sense of drama seems stereotypical at first — until THE SONG THRASHES YOUR FACE THE FUCK OFF IN A BLAZE OF GLORY.  This song is so fast, so vicious, and so energetic, it’s hard not to destroy your own room to it.  There is shred, and thrash, and groove, and breakdowns, and like, EVERYTHING YOU COULD POSSIBLY WANT IN A GOOD MODERN METAL SONG.

“Trust In None” has superb groovy melodic riffing and an awesome, long, clean intro.  One thing you’ll notice about this album is that Threat Signal not only manage to make the songs feel longer than they really are, but also to make them awesome all the way through.  When a band can make their material both feel longer than it really is AND have you wanting more on top of it, they have done their job well.

And these songs really are packed with content.  Take “Face The Day” with it’s extremely technical, extremely Nevermore-esque riffing.  The riffs alone are content-packed, bobbing and weaving like a cobra with even funky djent mutes interjected to give it a unique feel.  Definitely one of my favs on this album.  “Fallen Disciples” brings the no-nonsense thrash metal back, beating in your skull while bringing an epic feel.

“Disposition” is one of the more ambitious songs on the album, Threat Signal channeling something like their own version of a Megadeth Rust In Peace vibe.  The riffing is smart and dynamic, and when the djenty breakdown in the middle erupts, I just want to break things.  The epic melodic outro is also very nice, with insanely good melodic shred courtesy of Feener.

“Death Before Dishonor” is the only song reminiscent of the old Threat Signal; they even use their old guitar tuning to recapture the mood.  It’s an oddly plodding groover with a lot of balls, and though it feels a bit out of place musically, it’s nonetheless a great song.

Closer “Buried Alive” really brings it home.  Bombastic open-note grooves full of energy and attitude pervade this song, providing a solid way to finish the album.  I love the chorus in this song, both sludgy and also epic at the same time.  This song will hold your attention from start to finish, and I enjoyed the particular ambience with which the song fades out. 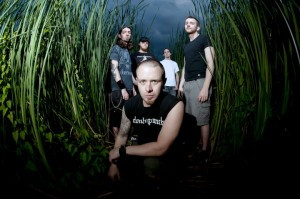 The musicians in the Threat Signal camp are at the top of their game.  Jon Howard is in prime form, delivering a deeper tone in his vocals, while guitarists Chris Feener and Travis Montgomery may be one of the tightest modern metal guitar duo’s out there right now.  Not only are the riffs superb all the way through the album, the solo’s are flawless pieces of masterful shred (I dare you to resist orgasming at the outro sweeps of “New World Order”). Pat Kavanagh’s bass provides the rock-solid bottom end, while Alex Rudinger slays the kit.  The man plays everything so right and so tight, never showing off needlessly and knowing exactly when to appropriately bust out.

The mix on this album has balls, but it’s also reserved in scope for the sake of clarity (which is needed, considering the technicality of some of these riffs).  It’s solid though, no complaints about that.

Threat Signal may have vaulted into my Top 10 of the year list.  This album is simply great.  Music to check out below, of course.

EDITOR’S NOTE: Two songs have been officially released from the new album to date, and you can hear both of them below. And then after that we’ve got three videos. The first premiered recently on SickDrummer Magazine and shows Alex Rudinger performing “Face the Day”. Following that is a video of guitarist Chris Feener performing the same song. And last is a video that the band released yesterday. It’s not a Threat Signal song. It’s a guitar solo that TS guitarist Travis Montgomery composed for part of the hellaciously catchy Textures song “Reaching Home” from that band’s new album, Dualism. (If you like this version of “Reaching Home”, with Travis’ solo, he’s made it available for download HERE.)