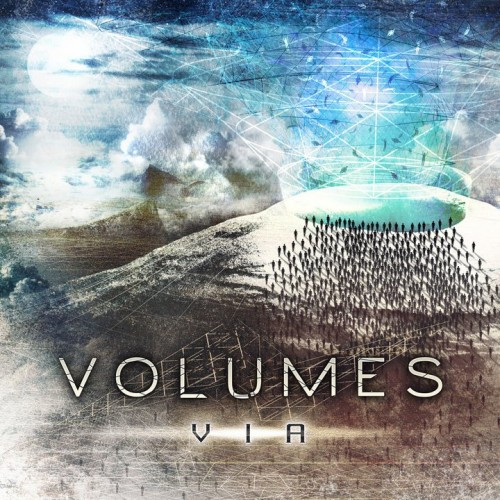 (I think this makes 7 days in a row when TheMadIsraeli has graced us with his presence. Sleep is obviously not one of his daily requirements. Today we have his review of the latest album from SoCal’s Volumes.)

Are you by any chance in the mood for grooves so infectious your head won’t stop bobbing, EVEN WHEN YOU’RE NOT LISTENING TO THE ALBUM?!  This is what Volumes’ Via does to you.  It’s a non-stop weighty groove machine of epic proportions, fucking shit up and furrowing fields with mass graves.

Who are Volumes?  Well, they deliver still more djeathcore, but this is honestly my favorite djeathcore band out there right now, mainly because these Californians don’t fuck around with anything but the core of their sound.  The minute that the staccato’d, djent-tinged groove of “Paid In Full” kicks in, it’s IMPOSSIBLE not to groove to this.  The band’s assault of low-end, 7-string, open-note grooving and djent chugging is a thing I should hate with all my heart and soul, BUT I LOVE IT HERE!  Volumes make it interesting and captivating in a way I have trouble describing, and I wish I could.

What REALLY stands out about Volumes is their ability to weave in and out of melodic and atonal parts in a seamless and often unpredictable manner.  The melodic bridge of the song “Wormholes” just appears out of FUCKING NOWHERE before transitioning into a pretty boss breakdown.  “Limitless” is another good example, with the band bringing in powerful, atonal deathcore chugs with eerie Meshuggah-esque leads, only to transition into a melodic hardcore section.  DO WHAT!?  Yeah, it’s pretty sweet. 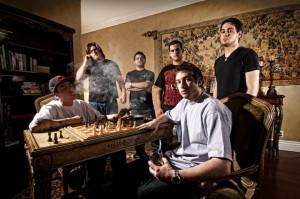 A lot of passion also seeps through the music. You can tell that while these dudes may be accused of doing something you’d consider status quo or gimmicky, they are truly feeling it, unlike some of their peers.  Volumes BELIEVE in the djeathcore style. That’s made obvious, at least to me, by the energy of the music as well as the powerful emotive qualities of some of the lyrics and melodic sections.

“Intake” is one of my favorite songs by this band. It deals with losing a loved one before you’re able to have a reconciliation, or tell them you loved them one last time. I listen to this and I really feel the subject matter.

Other such emotionally affecting songs include “Serenity”, which features a solo by Chris Letchford of Scale The Summit, and the revolving-door atomic-bomb groove of “The Columbian Faction”.  These two songs also showcase Volumes’ ability to transition among tempos and moods without missing a step, completely jarring your sense of orientation and then forcing you into another groove that you can’t fight against.

In a nutshell, Via delivers solid, groovy djeathcore that brutalizes, yet knows how to bust out the melody when needed.

As far as the musicians in Volumes, this band is a tight, top-notch unit with unusual gifts.  The thing that stands out to me most about Volumes is the vocal tag team of Michael Barr and Gus Farias; they’re one of the most powerful vocal duos I’ve heard in modern heavy music.  One attacks the mic with a solid, unflinching, hardcore bark while the other busts out more messy, even more disgruntled vomity shouts, and both both of them are also capable of delivering good clean vocals.  The clean voices are not especially distinctive or immediately recognizable; they serve more to complement the music’s more ambient moments than anything, but they do so quite well.

You owe it to yourself to give these guys a chance. I mean, there has to be something to them if I’m digging this, right?

Via was released by Mediaskare Records and is available now in digital form on iTunes. Physical copies of the album will be released on October 11. The entire album is streaming exclusively at Revolver’s web site (HERE).