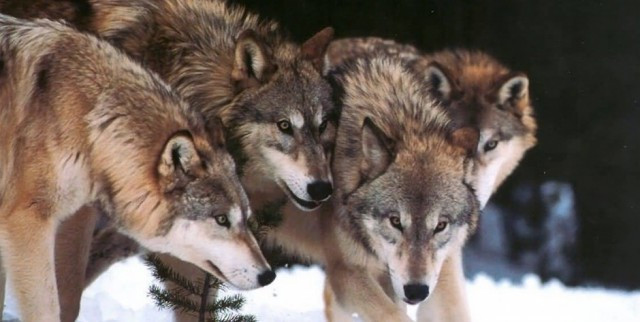 “They say not to anthropomorphize — not to think of them as having feelings, not to think of them as being able to think — but late at night I like to imagine that they are killing; that another deer has gone down in a tangle of legs, tackled in deep snow; and that, once again, the wolves are feeding. That they have saved themselves, once again. That the deer or moose calf, or young dumb elk is still warm (steam rising from the belly, as that part which contains the entrails is opened first), is now dead, or dying.

“They eat everything, when they kill, even the snow that soaks up the blood.

“This all goes on usually at night. They catch their prey from behind, often, but also by the nose, the face, the neck — whatever they can dart in and grab without being kicked. When the prey pauses, or buckles, it’s over; the prey’s hindquarters, or neck, might be torn out, and in that manner, the prey flounders. The wolves swarm it, then. They don’t have thumbs. All they’ve got is teeth, long legs, and — I have to say this — great hearts. (more after the jump  . . .) 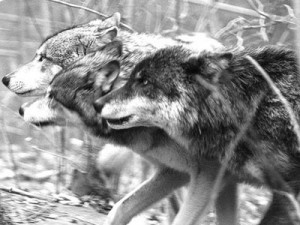 “I can say what I want to say. I gave up my science badge a long time ago. I’ve interviewed maybe a hundred people for or against wolves. The ones who are ‘for’ wolves, they have an agenda: wilderness, and freedom for predators, for prey, for everything. The ones who are ‘against’ wolves have an agenda: they’ve got vested financial interests. It’s about money — more and more money — for them. They perceive the wolves to be an obstacle to frictionless cash flow.

“The story’s so rich. I can begin anywhere.

“I can start with prey, which is what controls wolf numbers (not the other way around), or with history, which is rich in sin, cruelty, sensationalism (poisonings, maimings, torture). You can start with biology, or politics, or you can start with family, with loyalty, or even with the mystic-tinged edges of fate, which is where I choose to begin. It’s all going to come together anyway. It has to. We’re all following the wolf. To pretend anything else — to pretend that we are protecting the wolf, for instance, or managing him — is nonsense of the kind of immense proportions of which only our species is capable.

With these words, American writer Rick Bass began a slim 1993 book called The Ninemile Wolves. I came across it yesterday. I thought this beginning was pretty fuckin’ metal. It was serendipitous, too, because at the same time I was thinking of new music from wolfish metal bands that I’ve been listening to, and two songs in particular. Both of them are emotionally affecting, beautifully melodic, and black as a moonless sky in winter, sheltering predators on the move.

The first track is “The Sentinels” from the new album by Wolvhammer, Obsidian Plains, which will be released by Profound Lore on October 25. Epic, blackened doom, this song is amazing. It conjures images of wolves, and it is so easy to become caught up, and lost, in the music. I’m intensely interested in hearing the rest of this album.

The second song is the long opening track from Celestial Lineage, the new album by Wolves In the Throne Room. It’s called “Thuja Magus Imperium”. More sweeping, epic, black majesty. More images of a wolf pack loping through the snow, with the scent of prey in the air.

Back to Wolvhammer — here’s a link for the download of another song from Obsidian Plains called “Writhe”, straight from the Profound Lore web site. Right click on this, save it, and listen:

By the way, if you haven’t discovered the Profound Lore download page, GO HERE and check it out. There’s a shitload of awesome mp3’s to be had there for the asking.