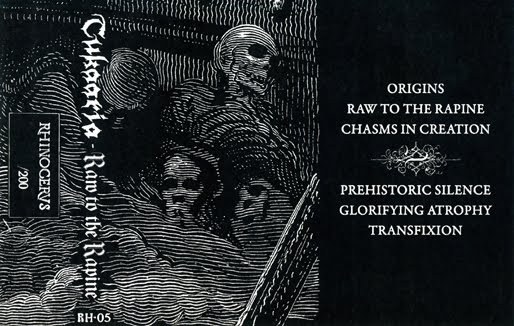 So, I decided I would go to Facebook and pick the very first piece of nasty music I saw in the recent stories on my wall and throw it up here. And the very first status I saw on my wall was a post by Profound Lore with a link to a song on Soundcloud by a one-man Los Angeles black metal band called Tukaaria. It turns out that Profound Lore has plans to release a CD later this year that will include Tukaaria’s sole full-length, 2011’s Raw to the Rapine (released on tape by Rhinocervs), plus material from a cassette split that Tukaaria did with a band called Odz Manouk. The song on Soundcloud is the title track from Raw to the Rapine.

Finding this song was piece of luck. It just seems right for several reasons. One, Tuukaria is a Yaqui word meaning “night”. If you don’t know about the Yaqui, stay with me past the jump. Two, “Raw to the Rapine” is an awesomely metal song name. And three, the song name is apt, because the music is raw as road-burn and senses-raping. It also got my head bobbing. It could have been a big piece of shit and I would have posted it here anyway because I promised myself I’d go with the first thing I saw. But it’s damned good.

Also, there’s a fourth thing: the song is available for free download. Listen, get the download link, and read about the Yaqui, after the jump.

[audio:https://www.nocleansinging.com/wp-content/uploads/2011/10/02-Raw-to-the-Rapine.mp3|titles=Tukaaria – Raw to the Rapine]

Third, about the Yaqui: They’re a Native American tribe who live mainly in the Sonoran state of Mexico, but also in parts of Arizona. They have a fascinating culture. They also have a brutal history. I know a little bit about them because of a book by Texas historian J. Frank Dobie called Apache Gold and Yaqui Silver. Here’s an excerpt, from pp. 157-159:

“In their Sonoran desert is an immense ant — black, voracious, venomous. When he stings you, you feel a hatpin jabbing to the bone, and the poison makes you faint and sick all over. Not for enemies in war is the ant; he is reserved for traitors, for wrongers of the Yaqui people, for betrayers of the tribe. A man — a Mexican yori, let us say — is stripped naked and spread-eagled over an ant bed. The ants work at night as well as by day. If the naked yori is tied out over the ant-bed when the sun goes down, by the time it comes up only the gristle ligaments fastening his bones together and the cream-yellow bones — soon to become glistening white — will be left. After a dozen or so of the ants have stung a man, he is probably anesthetized for the remainder of the operation.”

Fucking metal. And that’s only one of the Yaqui’s gruesome forms of retribution vividly described in Dobie’s book.

9 Responses to “TUKAARIA: “RAW TO THE RAPINE””