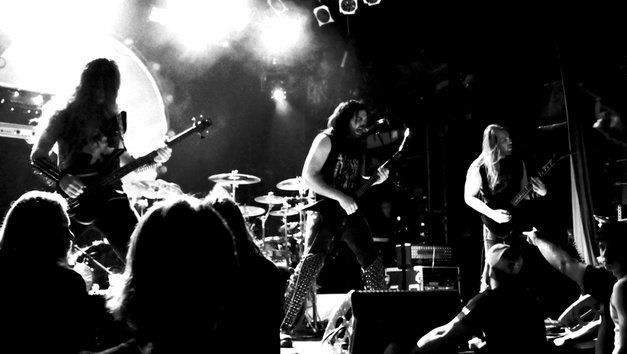 (Here’s an update from Andy Synn about Abigail Williams’ work on their next album.)

Some of you may know (or may not, hell, I don’t know how much any of you pay attention) that I’m a big fan of Abigail Williams. You might also know that since we opened for them a few months back I’ve been in pretty regular contact with Ken “Sorceron”, keeping tabs on their various tours and the writing and recording of their upcoming third album.

The band recently completed drum-recording at Keene Machine Studios in LA, with the irrepressible Michael Keene (of The Faceless fame) engineering. The rest of the record is being recorded at the group’s own home studio, with frontman Ken Sorceron acting as producer (as, contrary to popular belief, he has done on both the group’s previous records). With that in mind, I thought it the perfect time to issue a bit of an update on how things are going and collect together the various hints and bits of info that I’ve managed to glean so far . . .

First things first, as you may have seen, the band are collaborating with drummer Zach Gibson, who originally appeared with them way back on the Legend EP (btw – if you can track down “Watchtower: Revisited”, the re-recording of one of the debut EP’s best tracks, I recommend you do). Mr Gibson has been appearing of late with “Phobia” and “Gutrot”, delivering short spasming blasts of grindcore devastation. As he says in the video you’ll see at the end of this post, he’s had to adapt his style a bit to the new AW material… (more after the jump) 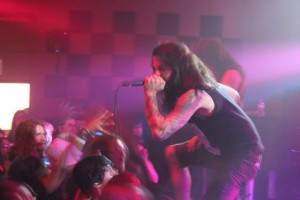 Speaking of new material, the next record will contain 5 songs, but around 60 minutes of music. One of the songs, in fact, breaks the 20 minute mark. I’ve heard an arrangement of the drums, scratch guitars and keys and am very excited. It really tells a story through multiple “movements”. In addition, the record also features the prominent appearance of real strings, written and arranged to augment the flowing keys and biting guitars with a far richer, more classically inspired sound that suits the grand scope of each composition.

With the direction of the new record, you can probably see that it’s a lot lengthier and more drawn out, without neglecting the surprisingly challenging guitar and drum work which has often been overlooked in AW’s music. Ken has described some of the material to me as having a vibe like a blackened Cult Of Luna, the album as a whole coming across as softer, with a more pronounced influence from Isis. Now having heard several (high quality) pre-demos, I can definitely see that. HOWEVER – I hesitate in some ways to use the term “Post-“ with regard to the music I have heard thus far.

Use of the prefix “Post-“ suggests a rather ethereal, shimmering vibe  which I don’t find here; instead, the record (thus far) seems to be just the opposite of that. It’s earthy and brooding, an exploratory journey through the oppressive darkness of the abyss, where the shadows creep and crawl, all teeth and claws, on into the cold, sun-bleached plains of a barren and desolate emptiness. Though comparatively less aggressive than either of their previous records, the music remains just as (if not more so) emotionally devastating, as well as retaining a sense of energy that belies the “Post-“ comparisons, both the drums and guitars crackling with restrained fury. There is power here, but it’s of a slower, almost glacial sort – weighty, rather than simply “heavy”.

Anyway, I’m anxiously awaiting the chance to hear some more of this, as I think it’s really growing into something special and extremely unexpected. I’ll keep you all updated as things progress, whether you want me to or not!