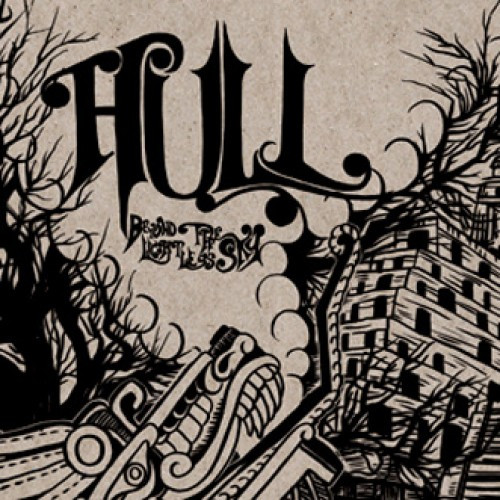 There’s a point at which the vector lines of blackened sludge, doom, stoner metal, and psychedelia intersect, and at that point sits Hull. That realization is evident from the opening track of this remarkable Brooklyn band’s new album, Beyond the Lightless Sky. “Earth From Water” has it all: lurching, catastrophically distorted, cavernously tuned guitar and bass, crushing all in their path; tripping psych-blues guitar leads designed to give you a 1,000-yard stare and solos that would make Jimi Hendrix smile if he were still with us; skull-fracturing drum progressions; vocalizations that mimic the sound of a man with his intestines being pulled out with hot pincers — all of it dense and dark and hopeless, and yet utterly enthralling.

And then I came to the second track, “Just A Trace of Early Dawn”, and I changed my mind. Thematically, the music hasn’t changed. It is still a lesson in the emotional fallout of despair, but the sound of it! Very different, like an Appalachian take on the blackened blues, deep in the hills at night, acoustic guitars strumming an indigo meditation, long and slow, like mournful sex with someone you’ve known forever and will never see again. The light and the delight have gone, and what remains is the sorrow of your maturity.

So off-balanced was I at this point, I wondered what would come next. After a few, brief transitional seconds linking up with the end of the song before, “Beyond the Lightless Sky” returns to the riveting mix of the opener: A segment of rushing cacophony which then zooms off a cliff and falls and falls into a black pit with deep tar at the bottom, all gripping sludge filled with THC, a thick covering of doom, pierced by hallucinatory guitar leads.  (more after the jump . . .) 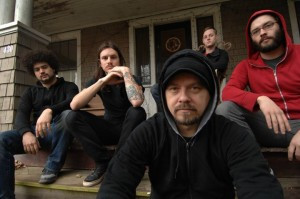 “Curling Winds” comes next: Another instrumental interlude of black acoustic guitar, this time shrouded in whispering electronic noise, another part of the album’s musical progression, which seems designed to re-wire your brain a few thousand neurons at a time.

The slow, morbid intensity resumes when “Fire Vein” begins to unfold. Times of chaos and times of contemplation trade places, with hollow, despairing vocals calling out from a crypt-like place, eventually swamped by streamers of psychedelic guitars swirling into the dark above gut-thrumming bass lines. Clean vocals, filled with honest emotion, make an appearance and work well in the miasma of this song. It’s a long, lost jam that swallows you up.

“Wake the Heavens, Reveal the Sun” follows, and you may began to wonder: Will I ever wake from this dream? You feel like you’re plenty deep into the music already, yet the soft pattering of the drums, the low moaning of the bass, the ambient swell of the guitars, they all pull you further under, and out away from shore. It’s another instrumental interlude that works on you where you’re most vulnerable.

It’s just further tenderizing your flesh, rendering it less able to resist the pull of the sucking sludge that follows in “False Priest”. Wait, no! There’s an involuntary muscle reaction left, enough to pull your head up and down in sync with the grinding, stoner pulse of the riffage, but the oxygen is still being sucked out of your headspace. Forget trying to think about anything but those mesmerizing chords and wailing vocals, the fat riffs and the unexpected clear, clean voice that appears in the middle of the song, introducing a bit of light before the pungent, black grip of the music re-exerts its hold.

Is it time for another interlude? Is that what “A Light That Shone From Aside the Sea” will bring? Why, yes, it does, with a slow, bluesy rock beat, fuzzed-out bass lines, and the reverberating chimes of a guitar. It’s both crushing and ethereal at the same time.

One song left, which is really too bad, but it’s a bang-up finish. “In Death, Truth” is its name, and you want to nod your head in agreement. The music begins as a heavy bulldozer of pummeling riffage and clattering percussion, hard-driving and hard-hitting. Then the pace slows a step, but without any loss in the song’s electric intensity, which if anything grows even more powerful. Massive, slamming riffs compete with sick dual-guitar maneuvering until finally nothing is left but the relentless pounding and slowly fading static.

Some albums you can grasp and appreciate by listening to a single song, just as you can grasp the whole of a fractal pattern by looking at any part of it. Beyond the Lightless Sky is one of those albums meant to be experienced and only fully understood through full immersion, by listening from beginning to end. Hull take sludge and doom and turn them into something . . . epic. Here’s the title track:

[audio:https://www.nocleansinging.com/wp-content/uploads/2011/10/03-Beyond-The-Lightless-Sky.mp3|titles=Hull – Beyond The Lightless Sky]

Beyond the Lightless Sky will be released by The End Records on October 11 and can be pre-ordered here. Hull’s official site is at this location, and you can find their Facebook page here. You can also stream the entire album by going HERE. Finally, Hull will soon be starting a fall tour. Here’s the schedule: