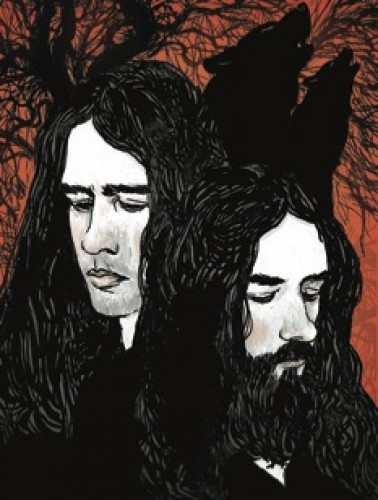 Also, remarkably, it doesn’t use the words “fuck”, “fucking”, “brutal”, “pummeling”, or other words most of us are used to seeing (or in my case, using) in descriptions of metal. You can read the article via this link, or you can go past the jump, because I’ve pasted it into this post.

How to approach black metal.

The fertile and fractious U.S. scene in the genre known as black metal can be understood through a familiar moment in rock history. In the sixties, British bands like Led Zeppelin and the Rolling Stones mined American blues, first copying their heroes and then creating something vivid and novel. In the nineties, a range of American acts began drawing from the work of Norwegian metal bands that were famous mostly for a look and for several unpleasant events. The Norwegians were largely faithful to the “corpse paint” costume, in which the face is covered in white makeup, with black circles drawn around the eye sockets. Upside-down-cross pendants and spiked bracelets were common accessories. The tabloid-worthy events centered on a musician named Varg Vikernes, of the one-man band Burzum, who encouraged and participated in the burning of churches. In 1993, while playing bass in a band called Mayhem, he murdered the guitarist, a man known as Euronymous.

Until recently, it was a legacy that the genre couldn’t shake. But now American bands such as Liturgy, Krallice, Absu, Leviathan, Wolves in the Throne Room, and Inquisition have left a fair amount of the pageantry behind—not to mention the violence—and helped to create a community, as well as a musical moment that is rife with activity. Because of what the music does formally, there is little chance that we will see a Top Ten black-metal act. The elements of the genre that are common to its bands—even those which don’t subscribe to the term, since black metal’s borders are fiercely policed—are extremely fast strumming of guitars, equally fast drumming, and singing that is either extremely low and almost gastric or very high and vaguely spectral. The vocals in the lower register have been called both “the Cookie Monster thing” and “reptilian.” The most accelerated version of the black-metal beat—in which cymbals and multiple drums are hit with the rapid and even force of a sewing machine, which almost erases the idea of drumming as time-keeping—is called the “blast beat,” which Liturgy has modified into a variable-speed approach called the “burst beat.”

This is all extreme stuff, and, when it’s played by grown men who look like couture pandas, there is plenty of reason to be skeptical. Get past the novelty, though, and you find a level of passion and an attention to detail that make a number of mere rock bands look lazy. People are starting to pay attention. Liturgy, whose members live in Brooklyn, records for the respected indie-rock label Thrill Jockey, which made its name in the mid-nineties releasing avant-garde but civilized rock. Because so many varieties of electronic and non-Western music have been tapped by traditionally organized rock bands, there is great allure in the lesser-known strategies of black metal, which was for years a self-sufficient, distinct subgenre that wasn’t looking to expand.

Liturgy’s second album, “Aesthetica,” has been widely and positively reviewed, and the band recently played at MOMA, with a film of Joseph Beuys preparing an installation as a backdrop. But success in those terms leads to backlash. Most black-metal fans would not only reject that kind of fine-art credential; they would punish a band thus associated, and Liturgy has recently been caught up in a fight about identity, the limits of pretentiousness, and the point of black metal itself. Look online for an essay called “Transcendental Black Metal,” by Hunter Hunt-Hendrix, Liturgy’s front man, and you will find the beginning of a very heated thread that addresses both “Transilvanian Hunger” and the “haptic void.” The genre and its fans are easily mocked, but the energy flowing through these arguments is bracing—and the music is growing increasingly powerful and unpredictable.

Another American group that has adapted black metal to its own ends is Wolves in the Throne Room, led by two brothers, the drummer Aaron Weaver and the guitarist Nathan Weaver, from Olympia, Washington. The band doesn’t identify itself as black metal, but, like Liturgy, it often accelerates its music to the point of blurring, where what is very loud and fast turns, in a kind of trompe-l’oreille, into something that sounds steady and comforting, like a version of medieval plainsong. Pushed to the limits of the players and their gear, this version of black metal begins to make good on some of its grandiose claims. Many of its adherents are almost monklike in their attempts to achieve “transcendence,” or, in the case of the Wolves, to agitate on behalf of sustainable farming. The quickest way to understand the newest wave of black metal is to imagine that Satan did not score a visa and is still stuck in Norway. (There are some American bands that do believe in Satanism—the scene’s factionalism underlines its fervency.)

At a recent show at the Bell House, in Brooklyn, Wolves in the Throne Room played last on a strong bill that began with Krallice. For the Wolves set, the band was partially obscured by a cloud of artificial smoke, and the stage was littered with candles and oil lanterns. Like most of their peers, the Weaver brothers, along with their additional guitarist, Kody Keyworth, don’t move around much onstage, perhaps because the physical demands of playing rule it out. The band’s new album, “Celestial Lineage,” is a nice bridge between the traditional modes of black metal and the Weaver brothers’ own concerns.

Like many black-metal bands from around the world, the Wolves have a symmetrical and entirely illegible logo that looks like a thicket of branches. The album art is moody and dark, per requirements, though a touch less ominous-looking than what you find on many other covers: what might be a couch under a sheet sits in the middle of a forest rendered in shades of light green and brown. There is no blood.

Songs like “Thuja Magus Imperium” work in lengthy, sustained melodic figures that would not sound out of place in some modern classical music. But then everything switches on, and Nathan Weaver sings in a strangled tone that is somewhere between the high, almost avian sound that Liturgy’s Hunt-Hendrix makes and the classic black-metal growl of a traditional Norwegian black-metal singer like Immortal’s Abbath Doom Occulta, as on 1992’s “The Call of the Wintermoon.”

Despite their protestations, Wolves in the Throne Room are engaged in the larger project of black metal, whose intensity makes an infinite amount of sense, whether or not you like the idea of words that you can’t possibly discern without a lyric sheet. If you’re going out of the house to hear amplified music, why not take that to its logical end? You may eventually find a TV that is sufficiently large that it makes going to a movie theatre pointless, but you are never going to replicate anything like a black-metal show at home, no matter how fancy your stereo is. The ritual aspects of makeup, smoke, and unusual typography help everyone leave the quotidian realm faster. There were moments in the Wolves set that were harmonically astonishing, when the strummed guitars felt more like the sound of massed voices, and when Nathan Weaver’s voice came across like some kind of electronic texture.

I kept thinking of Janet Cardiff ’s 2001 installation “The Forty-Part Motet,” currently playing at MOMA PS1. Cardiff re-created the performance of a forty-member choir, each singer emerging through a separate speaker, performing the 1573 Thomas Tallis piece “Spem in alium.” In eleven minutes, it uses a stunning variety of overlapping, interlocking parts, as deft in its repetition as anything Steve Reich has done. The interplay of the voices is also moving—I have rarely visited the work and not seen people crying within minutes.

“Death to false metal!” is a phrase that has circulated through various metal communities for years, often presented as a knowing joke, an acknowledgment that the seriousness of the project is rarely recognized by the mainstream. But if you’re going to be mocked for looking funny or singing in an odd voice, better to do it in the service of something verifiably remarkable.”