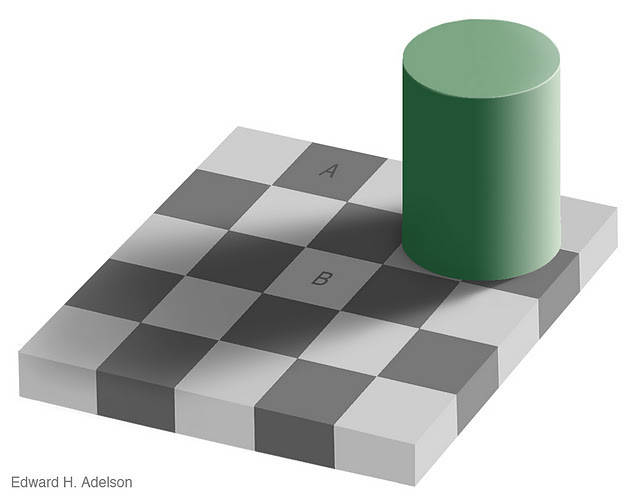 Sheesh, it’s been almost a solid month since I found time for one of these posts. That’s what I call falling down on the job! In an effort to make up for all the slacking off, I’ve rounded up five items that caught my eye. For any new readers who joined us in the last month, this series of posts collects videos, news items, and/or photos that I think are metal, even though they’re not music. All of today’s items are visual in nature, and credit goes to the incomparable TYWKIWDBI blog for all of them. Ready, set, go! 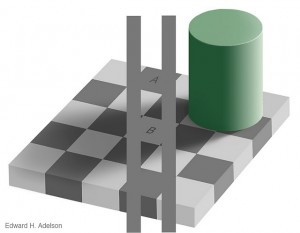 The first item is the image you see at the top of this post. Look at the squares labeled A and B. They are exactly the same color. No shit. The proof of that can be seen in the image to the right, in which cross-bars have been laid over the original image. You can see how the bars blend equally with the two squares. I see this and I still don’t quite believe it, and I don’t know the explanation for why my eyes see the squares as having different colors. As illusions go, I think it’s metal.

If you’re still skeptical, there’s video of this same illusion right after the jump. I suppose the highly skeptical among you might think there’s some kind of trickery going on in the video, but the creator insists there isn’t.

Here’s another similar illusion. If you think the two squares are different colors, think again. Cover the area between the two gray areas with your finger and take a second look. 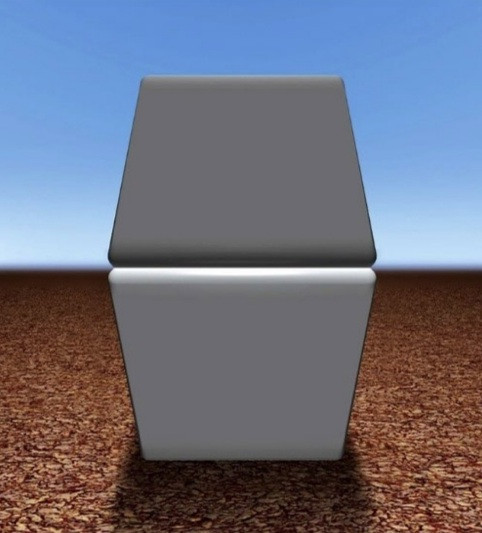 Have you ever heard of a “stick bomb”? Well, before yesterday I never had. When I saw a stick bomb display for the first time, I had no fucking idea what was happening or the explanation for what I was seeing, but the concept turns out to be ingeniously simple. It’s all about kinetic energy. I think this kind of thing is pretty goddamned metal — inventions that serve no purpose other than to mystify and entertain, and which turn out to be surprisingly simple to create.

In the next video, you’ll see one example of a stick bomb going off, and in the next video after that you’ll see how to make them, and an explanation of how they work. The second video is almost as entertaining as the first one, because the narrator has got a good (dry) sense of humor.

Most people have to work for a living, or one day they will. People who are lucky enjoy the work they do, and the rest just do the job because they have to. I admire people who are good at what they do, whether they like it or not and almost regardless of what the job requires. There are exceptions, like torturers or hedge fund managers, for example. But in general, people who are really good at their work are fuckin’ metal in my eyes.

Take this Iranian man in the video below as an example. I now have a whole new perspective on pouring tea.

I’ve never had my wrists bound by a zip-tie or seen anyone bound by a zip-tie in person. I’ve seen police use zip-ties to bind the wrists of suspected criminals on TV and in movies. It looks like getting out of them without cutting through them with something sharp would be pretty fuckin difficult. Now I’m not so sure. The video below makes it look easy, if you employ the right technique. By the way, this is not an instructional video for criminals. It’s part of a batch of instructional materials to help people save themselves if malefactors invade their homes, try to kidnap them, etc. I thought it was pretty metal.

There’s more detail and more videos about how to get out of zip ties and other restraints at this location.

At one point in human history, on the plains of Africa and probably elsewhere, people survived by running their prey into the ground, running other animals to the point when the prey reached a state of exhaustion and collapse before the hunters did. It was the original form of marathon running, where the goal was survival instead of competition or voluntarily meeting a challenge you set for yourself. Experts in evolution trace many aspects of the human organism to the physical adaptations necessary to make this practice work. It’s called “persistence hunting.”

Today, only one culture remains on Earth in which persistence hunting is still practiced as part of the regular routine of life — a tribe in the Kalahari Desert of southern Africa known as the San People (also called “bushmen”). The San are considered to be one of the oldest cultures on Earth — maybe the oldest. In the next video, and the last one in this post, David Attenborough narrates a 7-minute segment from the BBC’s Life of Mammals series.  It documents a man chasing a kudu for 8 hours until the animal collapses from exhaustion.

It’s a little bit cheesy, maybe a little bit overly dramatized, but it’s also quite powerful. We’re lucky we no longer have to chase our food into the dust in order to survive. Still, there’s something profound about the respect shown by the hunter for the hunted, and by the end of the chase, there’s almost a kind of communion that has developed, though it will end in death.