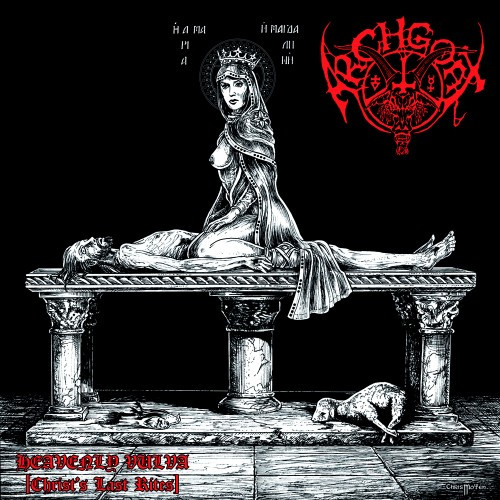 We get our fair share of e-mails every day from record label representatives and PR folks. The most intriguing ones are those offering promo’s of new albums for review purposes, especially albums from bands whose music I don’t know anything about. I wish I had time to download and listen to everything that comes our way, but I don’t. So I can’t help but be influenced by what the e-mails say about the music, and how they say it. There’s an art to doing it well.

Some of the most effective pitches we get come from Earsplit PR, an outfit run by Liz Ciavarella-Brenner and Dave Brenner. They represent an extraordinary range of metal bands and labels, and they seem to have a chameleon-like ability to adapt their prose to each band’s music. Liz, in particular, seems to have my number, maybe because the e-mails I get from her trend more toward the very nasty end of the metal spectrum that I like best (and yes, I know she’s not writing these messages for me alone, though sometimes it seems that way). Now, I don’t know who wrote this message I got yesterday, because this one wasn’t specifically signed by Liz or Dave, but shit . . . you have to read this:

“ARCHGOAT’s new mini-album Heavenly Vulva (Christ’s Last Rites) goes straight for the throat of the self-proclaimed messiah and his wretched mother. Featuring six trademark God-slaying tracks torn directly from the Virgin’s violated womb, this brand new EP is gloriously crude, divinely tumultuous and deliciously deviant, as we have come to expect from the filthy, fearless Finn black crusaders. Defiled, invasive unsanctified black/death delivered in a corrupt, vile and demonic fashion, these anti-epiphanies embed themselves in the sacred flesh, spilling blood from the demised dog’s quivering body, funeral bells chiming as paradise is ransacked and the deceptive lie of centuries is exposed. Pounding, ripping, gurgling and mocking, the truth reveals itself. Blood-soaked, battered and humiliated, the deposed former denizens of Heaven cower in a corner. A frantic, blasphemous onslaught on the blind, deluded fraud-worshippers and knee-bending whoremongers who follow the path of the Liar!
The band is not available for interviews.” 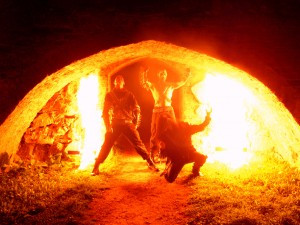 Fuck. If I could write like that, I’d kiss my day job good-bye and just . . . write. I especially like the touch at the end: “The band is not available for interviews.” Underlined. And italicized. You have to understand the context: Every day we get appeals to interview bands. Emphasizing that this band is NOT available for interviews is a strikingly clever way of telling you, as if you couldn’t figure it out from what came before, that this band is deep underground and KVLT with a capital V, i.e., they don’t give a rat’s puckered ass whether you pay attention to them or not. Except their label has hired Earsplit PR.

Well, if you have figured out anything at all about me, you’ll know I bit hard on this lure. I downloaded that 6-track Archgoat EP before I could take another breath. Not because I have a hard-on for music that captures the violation of the Virgin’s womb, mind you — though I did get a big smile from the album’s name — but because that write-up made me SO FUCKING CURIOUS.

And so here we are, less than 24 hours later, me having shoved aside all else I had planned to do for NCS today and instead writing about an album I didn’t know existed and didn’t care about until yesterday afternoon. I’m tempted just to say, read what Earsplit PR wrote, because it’s pretty much all true. But to justify my own existence as something more than a conduit for very well-written PR pieces, I’ll say a few words more. 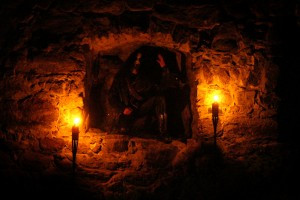 The music is deceptively simple, pared to the bone, downtuned to coal-mine levels of downwardness, and as filthy as a cesspool on a heavy-flow day. It’s devoted to the creation of atmosphere, an atmosphere of occult malevolence, a human attempt at capturing a myth of inhuman malignancy, and it pulls it off pretty well. The shit is so dank that I’m sure a thick carpet of mold is now growing in my ear canals. It’s a style of black metal I don’t think I’ve heard before; there may not be a tremolo riff or a blast beat on the whole record — but it’s still plenty black.

And as for funeral bells, special mention should be made of “Day of Clouds”, which includes one of the most effective use of them since the intro to “Hell’s Bells”.

I suspect what will make or break this EP for most listeners will be the vocals. They’re the kind of sub-bass frog-croacking that I’m used to hearing in brutal death metal, but this frog sounds like something long, thick, and pulsating has been shoved so far down its throat that it’s coming out the other end of the intestinal tract. Vocal variety is not on the menu, unless you count the cries of a young woman in the throes of orgasm at the beginning of “Penetrator of the Second Temple”, which sounds disturbingly bereft of joy.

One song has been made publicly available for streaming on the label’s website, so I don’t think I’m violating the rules by repeating it here. This is “Blessed Vulva”:

The EP will be released by Debemur Morti on November 1 and can be pre-ordered HERE. Archgoat’s official site is at this location.