(In this two-part post, which begins today and concludes tomorrow, BadWolf reviews the 2011 edition of OGREFEST in Lansing, Michigan, and we’ve got music for you from most of the bands whose performances he covers.)

[This article has been the absolute bane of my existence for six months. The weather messed with my car, I missed some bands while interviewing others, none of the photos turned out, half the interviews were unlistenable, and other variables (loss of employment, re-gaining employment, writing at InvisibleOranges) just fucked it for me.

That said, seeing as how I’m about to go to Suckfest (and have a blast!) I figured I would warm you readers up with another festival report, that for Lansing’s annual Ogrefest. I was going to put this article up at my personal blog, Midwestern Metalhead, but I spend so much time writing here and at IO that my personal project has fallen by the wayside. Therefore, this article is for you, dear NCS-ers!

Also, posting this article to a wider readership is my little way of apologizing for the unreasonable delay—it won’t happen again next year! Dave, Jim, this one’s for you guys!
And all of you strangers—come to Michigan. See Ogrefest. It will be the shit.]

Here’s the nitty-gritty: Lansing has the best underground metal scene in the US, IMO, and Ogrefest, curated by Satyrasis’ Dave Peterman, is that scene’s annual showcase. It’s held every year at Mac’s Bar and is always the show I anticipate most. At least one of these bands always ends up a personal favorite, and 2011 was no exception. On to the narrative!

It was a dark and stormy day in Lansing, Michigan on April 16–the typical midwestern spring weather for Ogrefest 2011, maintaining the dankness of summer with the darkness of winter. Mac’s Bar was packed with damp headbangers struggling for decent views of the stage. Seating was scarce and in all likelihood the crowd was a fire hazard. People of all ages and both genders (in a close-to-even spread) huddled around one another on the wooden patio to smoke cigarettes and other things. A collection of classic and obscure grindhouse films on scratchy VHS played on the TVs mounted from the ceiling. One could smell the evil from a block away.

In short, conditions were ideal. People wanted to be crowded inside and were well primed for metal by the alcohol, darkness, uncomfortable atmosphere and ready access to nudity (real) and gore (phony). The crowd was the most eager to clap and sing I’ve noticed at Mac’s; a good sign.

2011’s festival had a cohesive sense of community spirit and, as always, a strong lineup. The quick-and-dirty summary is: biggest crowd, most bands, least moshing and least problems (with one glaring exception). From an objective perspective, this might be the best we’ve ever had.

Some thoughts on the lineup:

In any festival there will be ups and downs, period. De-facto. This year there were no bad acts, just acts outclassed by their peers. Every band put on a strong show.  The power of ___core has spread even to the Michigan underground: more beats broke down [yay serial consonance!] this year than in all previous years put together, but the bands performing said controversial mosh parts were respectful and respectable at their style (more than I can say for my hometown). Also, no slam-dancers mucked up everyone else’s fun, just fists, headbanging, and the occasional push-pit. The lineup was also the most diverse it’s ever been, with almost every sub-genre with the exception of ‘true’ black metal represented. Oh well, Sauron cannot play every year. 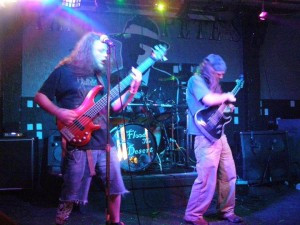 Every Ogrefest has one band that doesn’t quite fit in, and one band I have never heard of that blows me out of the water. Both of those titles this year go to Flood the Desert.

The band is only a three-piece, which can be a dice roll as a musician—there’s less to hide mediocrity behind. FtD have no problems in that area: every member is fantastic with their instrument. Together they play a brand of expressive and progressive sludge that is heavy on guitar wizardry and instantly recalls Mastodon’s Blood Mountain album.

The Michigan underground definitely respects technicality, but it’s rare to find a true progressive metal band in these parts, and Flood the Desert fit the bill. They made up for the relative airiness of the music with solid stage presence and an air of utter professionalism.

I respect any band that will go on in the middle of the afternoon to a tight-knit crowd and still come off cool, calm and collected. I also respect any band where the drummer lights his snare on fire and keeps playing. My hat comes off for Flood the Desert, I am now a fan.

Terratoma’s music is pretty ‘hip,’ as the young people say. They use some sweep picking, some breakdowns, some very safe diaphragm-friendly vocals and lots of technical-but-brutal melodies. In short: they are nothing surprising.

That’s fine, because Terratoma, unlike many of their peers, is great at what they do. The songs were engaging, the performance was lively, and their frontman Brian Sheehan is a laugh-riot; I will never forget hearing a man trigger a breakdown with the words “Maple pussy.” Terratoma are a common idea executed with uncommon grace and for that I salute them.

Ultrathrash frontman Adrian Von Overlord is a local legend. I feel the much talked about Botswanan Metal Cowboys [http://www.vice.com/en_uk/read/atlas-hoods-botswanas-cowboy-metalheads] must have had some contact with him, because the similarity is uncanny. His band, the finest in Grand Rapids, play old school death thrash (obviously) with a Teutonic edge. Some good points of reference would be Sodom, Slayer, Possessed, Sodom and early Morbid Angel. Except Ultrathrash may outpace them all. I’m serious, these mother**kers are fast.

Ultrathrash, both diamond sharp and solid from years of experience, are best experienced live. The appeal is intricately linked to Von Overlord’s imposing menace and high-pitched shriek (I’d love to see him tour with Vektor to compare vokills). It helps that Ultrathrash packed their own banners and light show, making for a pleasant and grim spectacle.

The Devastator is a Michigan band trying to blend the old-school Michigan style with more modern trappings. In this case, the focus is way more on brutal, technical death metal with loads of dissonant melodies. They pull it off—brutal riffs, alternating between melodic and atonal comprising off-kilter songs with plenty of high and low growls trading off. Definitely a band for my fellow NCS writers and myself to watch. Touchstones would be Heartwork-era Carcass and Cannibal Corpse.

The kicker (pun intended)? The Devastator’s drummer, Jim Dempsey, is an absolute beast behind the kit. His style is fast and punishing, but maintains a firm sense of tension and control, which is crucial in any mix of hardcore and extreme metal. When The Devastator are hitting full power, he is the lead player. When they are about to collapse, he holds the songs together.

I can see this is a band whose fanbase has grown perhaps a bit prematurely, but there’s real talent present—given time, I can see a bright future for The Devastator if they focus on their strengths and dedicate themselves to making memorable songs. Their self-titled debut EP was released digitally in May—it bites like a rabid dog.

Now this is some heavy, brutal music right here. Heavy Lies the Crown worship at the altar of mosh-friendly death metal with great fervor, and it suits them. Stylistically, I’d file Heavy Lies the Crown with The Devastator, except even less melodic and more brutal—the sound is thick, bass-heavy, and emphasized groove. I’m not sure I heard any slams, but I flashed back to Vital Remains and Suffocation more than a few times. One need only view the cover of their album, Gears of Inhumanity—pure old school evil right there. 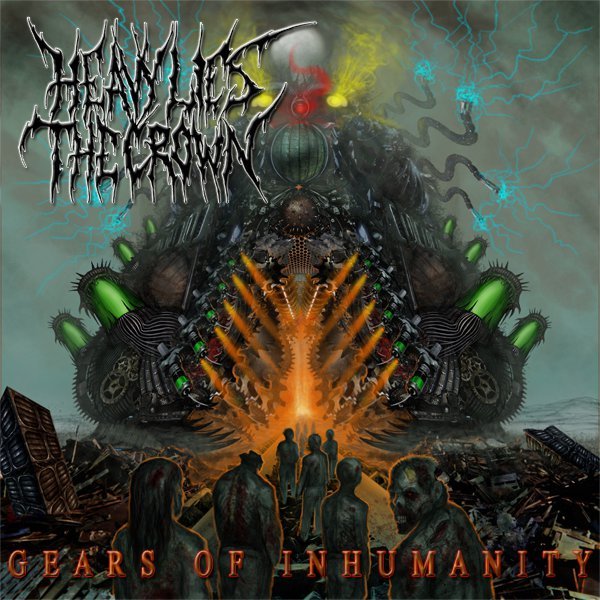 Since Heavy Lies the Crown is from Indiannapolis, I expected them to be tired and cranky, what with playing to a bunch of non-fans who, in general, knew one another. Not so. HLtC were more than just professional, they put on a great show with monolithic charisma. For the second time I’m going to shout out the drummer, John King—the kid’s an absolute beast, and his snare tone makes my ears smile (yeah, they do that). They played smooth and tight—clearly they practice often enough to have that effortless synchronization that makes great musicians into a great band.

Come back tomorrow for Part 2 of BadWolf’s Ogrefest show review.