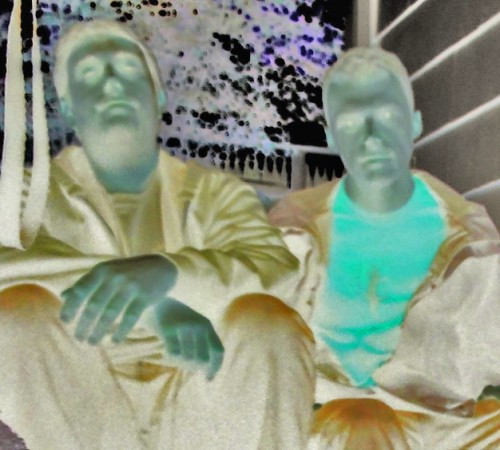 Brain Famine is a studio project that was formed in 2011 by two guys named Chris Leamy and John Gillis, both of them veterans of other bands in their community. On October 1, they self-released a six-song, self-titled EP. Gillis played drums on the recording and Leamy did everything else, including the engineering and mixing work. The EP is now available for free download at Bandcamp. You can get there by following this link. And that’s pretty much all I know about Brain Famine.

Except for the music, of course. The music is a goddamned weapon designed to shred the contents of craniums and leave the listener cross-eyed and drooling. Generally, it’s faster than your average greyhound, but it obeys no rules of metric consistency, darting from one time signature and tempo to another with oodles of technical skill. Pulverizing riffs churn your fuckin guts while the drums go off like guns firing semi-automatic bursts of lead. Leamy barks like a big, rabid death-metal dog that wants to use your jugular as a chew toy.

The longest and probably most interesting song, “Ingest”, backs off the flamethrower pacing of the first two tracks, but it’s equally berserker in its use of schizophrenic rhythms and unpredictable, unsettling guitar leads. “Citizen Solution” starts as another similarly mid-paced marauder, driven by thick, sludgy riffs and frenzied drums, but it grows in complexity and builds in speed until it becomes just as whacked out as the more abrupt, grind-centric blasters like “Die Off” or “Ignorant Dopes”, and it includes a beautifully diseased guitar solo. The EP’s closer, “N.F.O.”, commences like another hair-on-fire grind beast, then drops into a ghoulish crawl, before ending the festivities in a burst of cacophonous noise.

Truth is, I’m sold on every one of the songs on Brain Famine, The EP is a solid mix of tech-death, grind, thrash, and even a prog tendency every now and then. I’m sold on the band, too. There’s some serious talent on display here. Fans of Napalm Death, Magrudergrind, Agoraphobic Nosebleed, and Pig Destroyer, this is an EP you’ll want to grab while the grabbin’ is good. Get your drool cup handy and check out a couple of the tunes after the jump. You can stream all of them at Bandcamp.