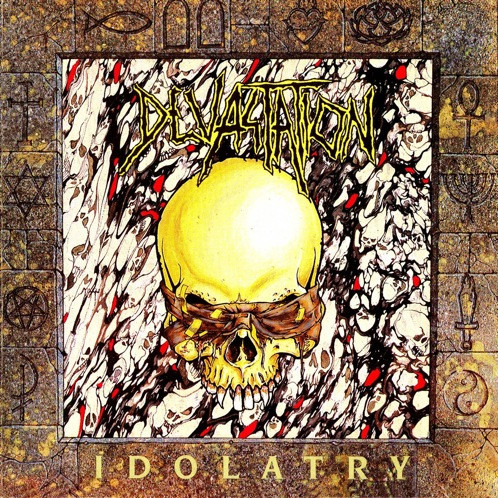 (Here’s yet another Revisiting the Classics piece by TheMadIsraeli.)

I know. Another thrash album. Tell me it’s not your thing all you want, but this genre is still the shit AND I THINK YOU GUYS MIGHT ACTUALLY DIG THIS ONE, as it has a bit of a death-thrash vibe going on.

Devastation were, and are, one of my favorite cult bands from the late 80’s/early 90’s. They combined death metal ferocity and riffing with the speed and technicality of thrash metal, and it is all too unfortunate that they released their masterpiece in the form of Idolatry at the wrong time. Released in 1991, this album, full of speed and brutality, hit just as a groove-focused surge was starting to take over in heavy music.  This album had no realistic chance of getting anywhere, and really, it didn’t, but solely because of the musical landscape of the time period surrounding it.

Let it be known, though, that this album is just utter chaos. The riffs are atonal, dissonant, frightening, and full of fury. The vocals are as well, vocalist Rodney Dunsmore delivering a Chuck Schuldiner-esque howl that foams at the mouth and gnashes with blood-hungry fangs. (more after the jump . . .) 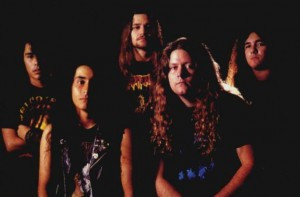 Opener “Deliver The Suffering” is the perfect start for this album, totally summarizing what it’s all about. After a minute-long eerie piano and synth intro, a wall of double-bass and weighty riffing crashes through the gates of the inferno with a deliberate march. The transition into fucking ape-shit speed just sends you into a fury of windmilling and moshing. It’s made obvious at this point that Devastation wasn’t content to sit squarely within the thrash framework. These guys craved something far more intense, far more visceral, something similar to bands such as Demolition Hammer or Sepultura.

The Slayer-like, churning grooves of “Freewill” speak a sonic mission statement that feels almost as if the band is already trying to finish you off on the second song alone. Here we experience one of the few moments when Devastation breaks into a melody of any kind, with a catchy pedal-point verse riff. There are jarring groove-to-frantic speed transitions on this track, something I’ve always enjoyed about the more brutal thrash bands.

“Forsaken Hatred” is a blistering onslaught of more speed, while “Souls Of Sacrifice” is the grooviest thrash song I’ve ever heard without devolving into groove-metal cliche.

But addressing the nuances of individual songs isn’t the real point of this album. This album is in heavy excess of your get-fucked capacity, and it’s all-in — no more spoon feeding your get-fucked dosage here. I mean, I mean like, IT’S SO HEAVY AND SO AWESOME. Just fuck well-thought-out, analytical reviewing. WIth an album like this, that shit is for the birds. This is a death-thrash/proto-death-metal classic. Undeniably.

I’m sorry, I can’t hear you over the sound of how awesome this album is.


EDITOR’S NOTE: According to Metal Archives, Devastation was formed in Corpus Christi, Texas and released their first demo in 1986. Idolatry (1991) was the last of three albums. In 2008, Rodney Dunsmore resurrected the band, with line-up changes, and they began performing again. Dunsmore announced that the band was writing new songs and planned to release a new album, but nothing new has yet surfaced.