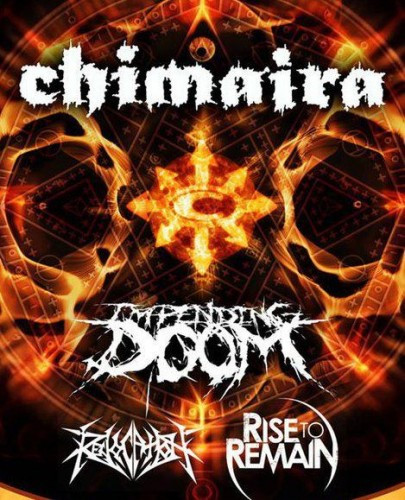 I just wanted to use my favorite word in a post title today. Actually, that’s only part of the reason for this. The other part is that I saw Chimaira last night, headlining a show in Seattle that included Impending Doom and Revocation. Chimaira played “Power Trip” and about 10 other songs.

After full audio immersion in the music of those three bands, my neck muscles were so destroyed when I woke up this morning that I had to strap on the custom-designed NCS neck brace, the one with the heated gel packs on the inside and the drinking straw attached to a pouch of chilled Stoli.

Chimaira had the strobe lights flashing and the smoke machine pumping and Sean Z (Daath) on keyboards, carpet-bombing the crowd with more bass drops than I’ve ever heard before and growling backing vox, and it was fucking glorious. A packed crowd on the floor was in non-stop mosh mode, and the Chimaira dudes looked like they were having the time of their lives on stage. And speaking of glorious . . . 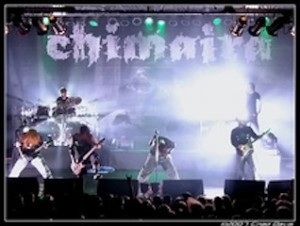 Revocation. Glorious. Dave Davidson said this was the band’s fifth performance in Seattle, and I’ve been to four of them. I never get tired of watching and listening to this band. Immaculate musicianship. Usually, I’m so transfixed by what Dave Davidson is doing with his guitar that I don’t pay enough attention to what else is going on, but last night I got a good look at drummer Phil Dubois-Coyne. Dude is a goddamned machine.

One reason I got such a good look was because he sat in behind the kit with Impending Doom, whose own drummer is out of commission. The style of drumming on Impending Doom’s more-deathcore-oriented songs is totally different from what Phil normally does with Revocation, but he killed it.

And speaking of killing it, that’s what Impending Doom did. Heavy as the heaviest fuck. Bludgeoning as a Teutonic mace to the back of your skull. Getting covered over in the bridge-collapsing sound was yet another reminder that this kind of music is 10 times better when experienced live than on recordings (and I like Impending Doom’s records, too, mind you). They played a new song from an album that’s due sometime early next year, and it’s one of their best yet. I’m pretty sure that’s when I tore the first of my neck ligaments.

How ’bout one more Chimaira tune? Another one of my favorite Chimaira tracks from last night’s show:

16 Responses to “FUCK YOUR POWER TRIP”