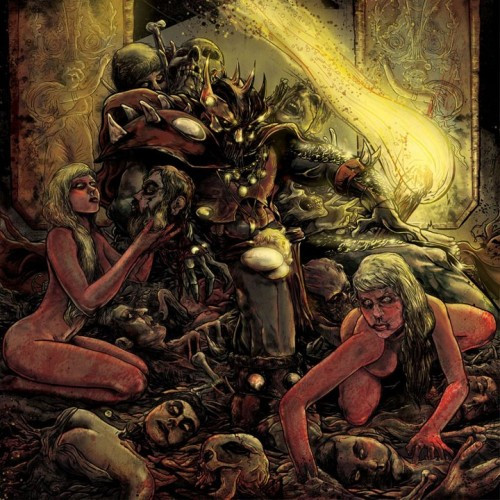 The 2010 debut album from California’s Son of Aurelius, The Farthest Reaches, drew an avalanche of critical acclaim and enthusiastic fan response. It made several of the Top 10 lists we published at the end of that year, including one from our own Andy Synn, who wrote this: “Son Of Aurelius have come seemingly out of nowhere with an epic, heroic take on the technical death metal genre, impressing nigh on everyone whom they have encountered. The songs on The Farthest Reaches have a character and individuality not usually found in the sort of music which usually contains technical wizardry of this level.”

So, when Son of Aurelius makes new music available, we sit up and pay attention, like good, obedient bloodhounds. That’s what happened today: Son of Aurelius started streaming a “pre-production” track off their next album. It’s called “Strange Aeons”, and it’s a strange choice as a musical tease for the next album. There are no vocals and no technical “wow” factor. It’s mid-paced, with prominent synthetic keyboards, and drums that sound programmed (though I doubt they are, with a beast like Spencer Edwards in the line-up).

In short, it sounds like a dreamlike mood-piece or instrumental interlude. Perhaps the plan is to add vocals later, but I can’t see vocals fitting with this music. As it is, it’s mildly interesting, but at least for me, nothing more than that. Have a listen after the jump and tell me if I’m a fuck for reacting so placidly.

By the way, is that an ass-kicking piece of artwork up there or what? I found it on SoA’s facebook page, but I don’t know what it is. New album cover maybe? And by the way (again), there’s no news I’ve seen about when the new album will be finished.

6 Responses to “SON OF AURELIUS THROWS A CURVEBALL”