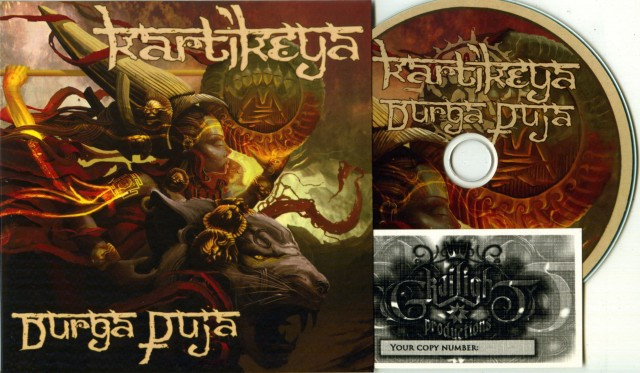 (We’ve run several features about the new EP from Russia’s Kartikeya, but haven’t yet reviewed it. TheMadIsraeli fills that gap today — plus, he’s arranged for us to bring you a download of the EP itself.)

My review of Kartikeya’s sophomore album Mahayuga was only the beginning of a love affair with this ethnic death metal band for us at NCS.  With that album, this Moscow outfit proved that there was more than just a little life left in death metal, providing an insanely eccentric take on the genre that incorporated heavy Vedic instrumentation and themes.  Now Kartikeya have unleashed a new EP upon us in the form of Durga Puja, and once again it displays the high quality they’ve already become known for in their short time as a band:  One totally new song, two totally rewritten songs from their debut The Battle Begins, a live track, and two top notch covers.

Durga Puja opens with the track of the same name.  The song really strikes a chord of Roots-era Sepultura (an album I love and one that was shamefully derided to begin with), but with the ethnic elements all over the place in classic Kartikeya fashion.  The mood of this song builds upon the more tribal-sounding aspects of their ethnic influences, creating a syncopated, metal-might-filled war dance of a track.  Probably my favorite part of this song is the breakdown, with chanting that is perfectly in sync with the guitar rhythm and the violin section that precedes it.  Very cool song and a bit different for Kartikeya.

“Enter My Dome” is one of the rewritten songs off their debut The Battle Begins.  Anyone who listened to that album will know that the music was great, yet underdeveloped.  This song now feels truly complete and truly Kartikeya in body and soul.  Transposed to 7 string guitars, made faster, with heftier grooves and epic new synths, this song blasts and brutalizes away.  This is definitely my favorite track on the EP.  (more after the jump, including music . . .)

“Nemesis” is another The Battle Begins track that has been converted into an entirely acoustic song.  The transformation is quite cool to hear, and in my opinion better than the original.  It evokes images of desert winds and feelings of intense heat.  The live cut of “The Path” from Mahayuga is absolutely FLAWLESS.  I must now see Kartikeya live, some way, somehow.

The covers are insanely strong — a Melechesh classic “Triangular Tattvic Fire” and the legendary opener and title track of Sepultura’s album Arise.  Kartikeya succeed in making the Melechesh  song their own while paying tribute to a band that’s obviously had extensive influence on them.  The guitars are tuned lower, and there are more synths and ethnic instruments employed.  It devastates the landscape with blasting, grinding and thrashing fury.

The band’s cover of “Arise” is also something to behold.  Played faster than the original, performed on 7 strings, and employing some nice changes to the drum lines, Kartikeya once again make this song their own while paying tribute to another great influence.  The cover is a fucking stream of scorching hellfire, absolutely frying all life on the ground in its path.  With that intense onslaught, this EP ends, leaving you rung out in the dust like the bitch you are. (Just a figure of speech, you’re not really a bitch.)

Kartikeya are fucking awesome, not only because they make great music but also because — once again — they’re allowing me to bring you Durga Puja for download, as they have for their previous albums.  I’m pretty sure if NCS ever became a record label, Kartikeya would be our first band.  It’s solid, kick-ass music with original flair, and if you haven’t yet heard what they can do, then you are seriously missing out. To download, right-click this link and save the compressed .rar file.

P.S. For those of you who would prefer to get a .zip file instead of an .rar file, use the link below:

Go check out my review of Mahayuga (here) to get the rest of the band’s catalogue for free.  I end this review with the sweet booklet art by Mstibog for the physical CD of Durga Puja, and after that you can stream three songs from the EP. 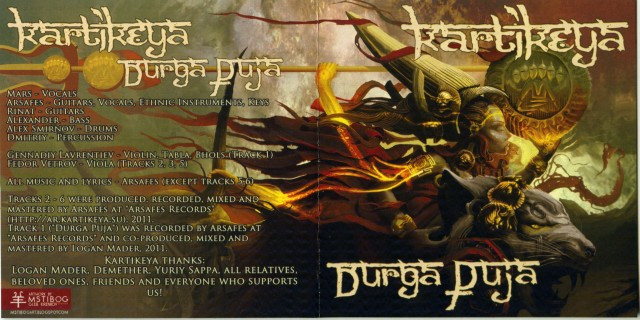