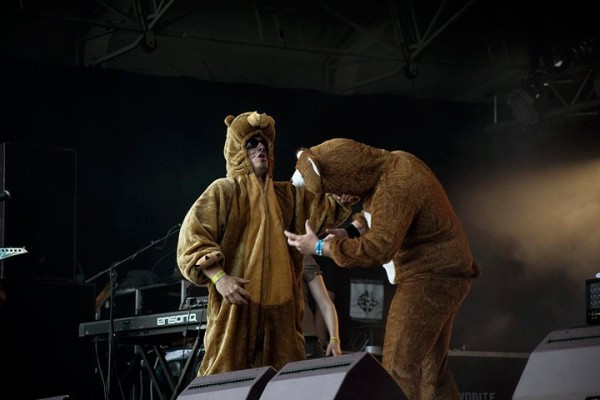 I was going to save this for tomorrow, but what the fuck. This day at NCS has shaped up to be more nasty and demented than usual, so I’m just gonna go with the flow.

So, there’s this band from Finland called Medeia. Yes, I know I have a Finnish metal fixation. I’ll eventually let go of that — when my fuckin’ corpse has turned blue and cold. Sorry, but that’s just the way it is. Anyway, Medeia are from Finland, which means, without knowing anything else, there’s about an 80% chance their music will be awesome.

And so it is — a powerhouse blast of death, thrash, and power-groove metal all rolled up into a nice package with a bit of metalcore sprinkled on top (thanks mainly to keyboardist Laura Dziadulewicz’s clean vocals). What’s that you say? You’re reminding me that I wasn’t going to allow anything clean in the house today. Well, I’m not. Because I don’t hear any cleans on the video I’m gonna show you after the jump.

And the video is just nutzo in so many ways I don’t even no where to begin describing it. It’s been out since May, so I suppose there’s a chance you’ve already seen it. It’s insane enough to have made the rounds. But I didn’t see it until TheMadIsraeli threw me the link last night. You may laugh, you may cry, you may want to bust shit up,  you may experience the full range of human emotions, but you should definitely watch this (after the jump).

By the way, if it helps sell you on the idea, the vocalist for Medeia is Keijo Niinimaa — who fronts both Nasum and Rotten Sound.

The song is the title track from Medeia’s third album, Abandon All (2011).

Hell, I might as well throw in some more videos that TheMadIsraeli showed me from this band. They’re all almost as entertaining as that one for “Abandon All”: