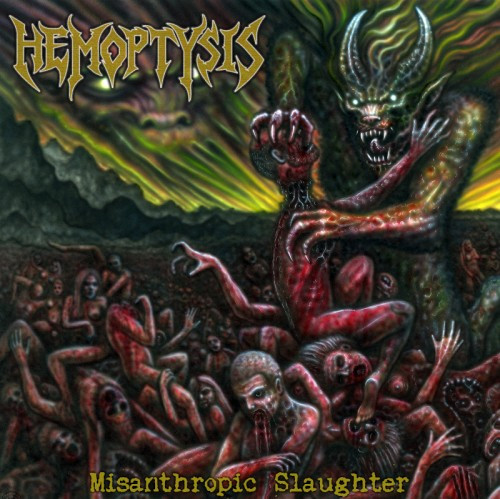 When you start the day with Maax, move right along to Claws, and then get a lot of F-bombs out of your system texting with a banker in Burkina Faso, there’s just no way you’re going to allow any clean singing in the house before the day is out. Nope, that ain’t happening. NCS is staying nasty today, through and through.

Hemoptysis is certainly nasty enough to qualify. “Hemoptysis” is a medical term for the coughing up of blood or blood-stained sputum from the bronchi, larynx, trachea, or lungs. It’s also the name of a metal band from Arizona who self-released an album called Misanthropic Slaughter in March. This album has stirred up quite a bit of hype since then, with glowing reviews from much of metal blogdom. I didn’t pay attention, because the descriptions used the word “thrash”. I thought to myself, “not another re-thrash band”, and just passed right on by.

But yesterday, the band released a music video for a song called “M.O.D.”, and I finally decided to hear what Hemoptysis was all about. That opened my eyes to something really good, despite my aversion to about 80% of straight thrash. But this isn’t straight thrash. At least based on this one song, there’s a heavy blackened crust on this music, plus there’s some quality instrumental ripping going down. I really liked the 2-minute riff-fest of an intro, the capable solos near the beginning and end, and the subtle melodies that have kept the song ringing in my head since it ended. Very good stuff. Catch that after the jump if you haven’t already seen it at MetalSucks today — and then I’ve got a word about something else over at MS that you may have overlooked. 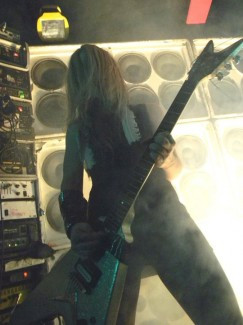 Now, about that other thing at MetalSucks. Yesterday those dudes premiered a new video from Jucifer for a song called “Hiroshima”. I was a Jucifer virgin until about a month ago when they played in support of Pig Destroyer in Seattle, and they fuckin blew me away. To borrow from what I’ve already written about that experience:

Even at half amplification, the sonic assault was powerful enough to liquify intestines. Massive waves of unmitigated distortion rolled outward in relentless blast fronts as Amber and Edgar delivered catastrophic, sludge-drenched doom punctured by jets of acetylene fury. Alexis warned me that I’d have a “bang-over” the next morning, and so I do — a sore neck and a brain that came untethered from its moorings and now kind of floats around with the least movement.

Jucifer’s music definitely won’t appeal to everyone’s tastes. I’m not sure it would grab me if I hadn’t seen and heard this band in the flesh. But the video for “Hiroshima” is just fucking amazing to watch. It shows something very close to what I was seeing when they played Seattle last month — that is, after the sonic detonations had detached my eyeballs from what usually holds them in place and they started to roll around in the sockets like marbles in a can.

Massive props to director David Hall for what he did with this thing. Seriously, go watch it HERE.

8 Responses to “NOTHING CLEAN TODAY, GODDAMMIT!”