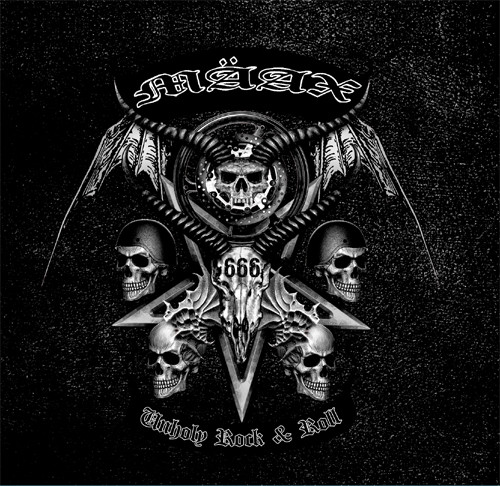 I don’t know any actual zombies, reanimated corpses, or other manifestations of the walking dead. Not personally. But I can imagine that when they congregate among themselves to get shit-faced and party like the fucking ghouls they are, they’re crankin’ the new album by Maax.

I’ve been fumbling around trying to decide on a genre label for this music. As I listened to the first track, “Coldest Steel”, I was thinking “death ‘n’ roll”. But as I moved deeper into the grisly vomit-rocket of this album, that didn’t seem to fit. Later, I thought about “thrash ‘n’ roll”, because most of the songs do sound like a breed of thrash, but “thrash ‘n’ roll” really doesn’t capture the gory filth that pervades the music.

“Slut-fucking black thrash ”n’ roll”? I suppose that could work. “Alcoholic heavy metal hellfire”? Yeah, that has possibilities. “Entombed meet Motorhead, get blasted, and then dress up in the freshly flayed skin of the just dead and start jamming”? That’s getting closer. But I finally decided that the band itself nailed the description in the title of the sixth track: “Rot and Roll”. (more after the jump . . .)

Yes, there’s plenty of filth on Unholy Rock N Roll — distorted, buzzsaw guitars spinning with greedy voraciousness; blasting rock drum rolls and gut-busting bass lines; headbang-worthy hammer-riffs; feverish guitar solos that erupt like a rampant viral outbreak; and gruesome vocals that sound like they’re being vomited up from someplace far lower than the stomach. Put it all together and you get a kind of diseased thrash without the annoying classic-thrash vocals. In other words, sweetness!

As nasty as all the songs are, a big part of what makes this album such a kick to hear is the variety within it. There’s definitely a healthy dose of putrifying party-thrash (“Maax” is a good example), but in the latter half of the album, the music takes a pronounced turn toward black metal. “Overthrone” is a corpse-grinding motherfucker of BM malevolence, and “Black Thrash Em All” lives up to its name: thrash ’em into mincemeat and let Satan sort ’em out. And “Deliverer” is as grim and serious as a heart attack. starting as a death ‘n’ roll crusher and then becoming thoroughly charred.

The only slow song on the album is “Purge of Depravity”, but don’t worry: Even that song is just as disturbed as everything else. It sounds like the rambling mantra of a homeless person, accompanied by unhinged guitar noise.

We almost always include one track to stream with our reviews, but I like so much of the music on this album, and it’s so tantalizingly different that I’ve got to give you four to hear:

Maax (pronounced “May-axe”) is from Indiana, and Unholy Rock N Roll is their second album. It’s out now and available in digi-CD format from Abyss Records or via digital download from iTunes and Amazon mp3. The band’s Facebook page can be found here.

If you have any zombie friends you’re planning to visit, this album would make a nice housewarming gift. 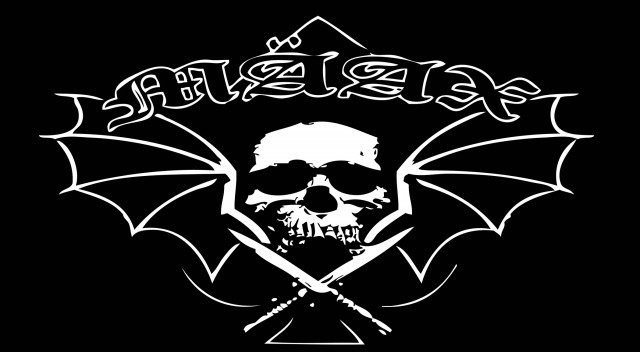