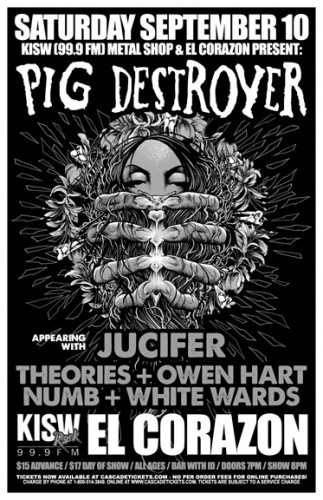 Last night some friends and I saw not one, not two, but three bands who made music using nothing more than one guitar, a drum kit, and a human voice. And using only those instruments, they made some of the most extreme, most wholly obliterating live music I’ve ever heard. I don’t mean to slight the other three bands in concert — they were all great. But Pig Destroyer, Jucifer, and Numb were revelations.

I have just a few notes about the experience, a few half-assed photos, and some studio recordings from each band, which honestly fall far short of capturing the immensity of the live music.

Numb is an unsigned band from Everett, north of Seattle. There’s one guitarist, one drummer (who shares vocal duties), and a lead vocalist who shrieks and roars. Numb plays music for the waiting room of the methadone clinic, a mix of rancid, smacked-out grind and tarry sludge. The very good drummer was a barbed octopod behind the kit; the guitarist churned out one loud, fat riff after another. And the vocalist was just flat-out unhinged. Top hinge off, bottom hinge off, door falls flat with a smack, and all the banshees come roaring out.

Did I mention they were really LOUD. That’s one way you can make up for the absence of a bass and a second guitar — distort the fuck out of the one guitar you have and shatter some ear drums. (more after the jump . . .)

Here’s a song by Numb called “Cower” (actually, this will only take you to the song-stream on Numb’s MySpace page): 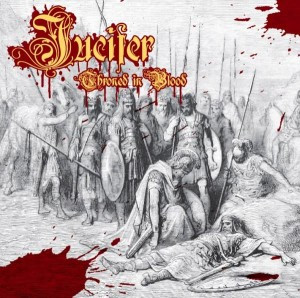 I’ve been hearing about this band for a long time. My NCS co-founder Alexis and a couple of her friends are huge fans of the band, and they gave me a big build-up to Jucifer’s set. The band consists of two people, husband and wife Amber Valentine and Edgar Livengood. They’re from Athens, Georgia, but from what I hear, they’ve been touring roughly 12 months out of the year for the last decade.

Their stage gear consists of Amber and her guitar, Edgar and his drums, and a wall of amps that stretch behind them from one end of the stage to the other. And Alexis and her friends told me that what I was seeing was really only half the full Jucifer experience, because when they headline (as they did at this same venue only a week earlier), the amps are stacked twice as high.

Even at half amplification, the sonic assault was powerful enough to liquify intestines. Massive waves of unmitigated distortion rolled outward in relentless blast fronts as Amber and Edgar delivered catastrophic, sludge-drenched doom punctured by jets of acetylene fury. Alexis warned me that I’d have a “bang-over” the next morning, and so I do — a sore neck and a brain that came untethered from its moorings and now kind of floats around with the least movement.

The two performers were also riveting to watch, intensely magnetic personalities who for all appearances seemed to be in the throes of an agonizing ecstasy. They weren’t touching, but it looked and sounded like sex to me.

Here’s one of the songs they played, the title track from their most recent album, Throned in Blood (2010); it’s a pale facsimile of the cataclysmic live version, but it will have to do. 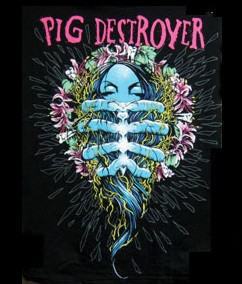 This is the band I came to see. They are a kind of metal royalty in my eyes. They don’t tour. They rarely leave the DC area to perform. Until this week, they hadn’t played a show in a year. They may never come to Seattle again in my lifetime (or theirs). But they were here on September 10, for a one-off set following their appearance at the MusicFestNW in Portland the night before, and I would have walked through walls to see them.

They played two new songs (evidence that the long-awaited new album is . . . in progress), in addition to a bunch of old favorites. Counting that earlier appearance in Portland, this was the second live performance with the band’s new drummer Adam Jarvis (Misery Index). As good as Brian Harvey was, I’m here to tell you that PxDx have lost nothing with this change — Jarvis is superb and right in step with the violent mayhem that PxDx creates.

Scott Hull is Scott Hull — one of the best current metal guitarists, period. Somehow he sounds like two guitarists and a bass player while churning out a blizzard of dynamic riffs. JR Hayes stalked the stage, gruff and dead serious and screaming his fucking lungs out.

I don’t have much else to say in the way of critical appraisal, because after about the first 10 minutes (during which I took some truly awful photos before giving up), I found myself caught in the  mosh pit, which was a non-stop ultraviolent affair, and the rest of the set was a swarming blur of obliterating, head-whipping sound, ricocheting bodies, suicidal stage-diving, and general delirium. I’m black and blue this morning (literally), but damn was last night fun.

Here’s “Rotten Yellow”, followed by the video for “Piss Angel”. Shitty photos to follow after that. 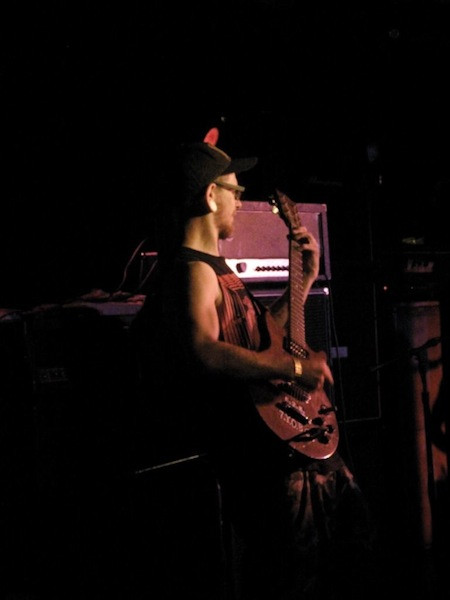 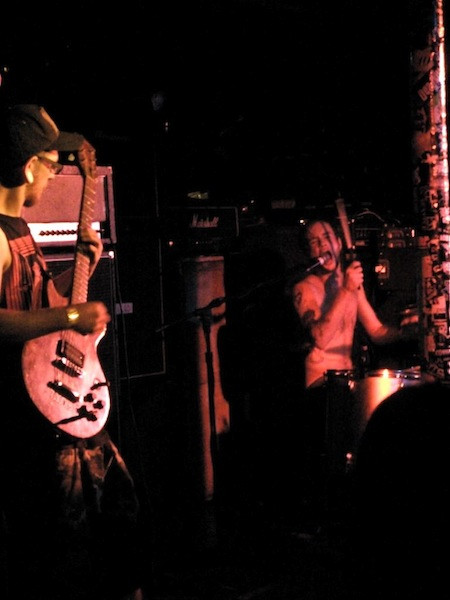 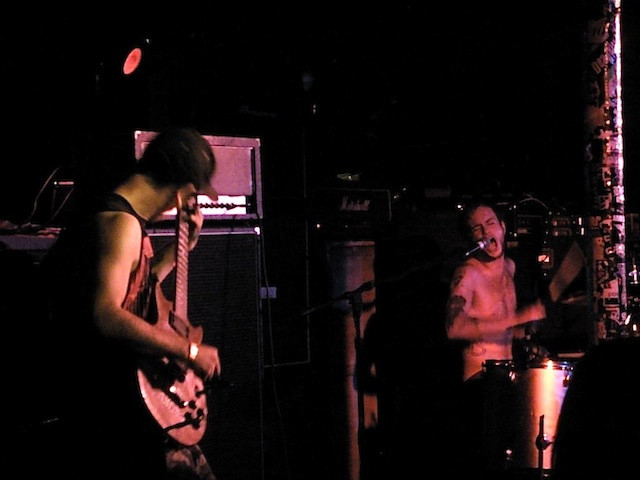 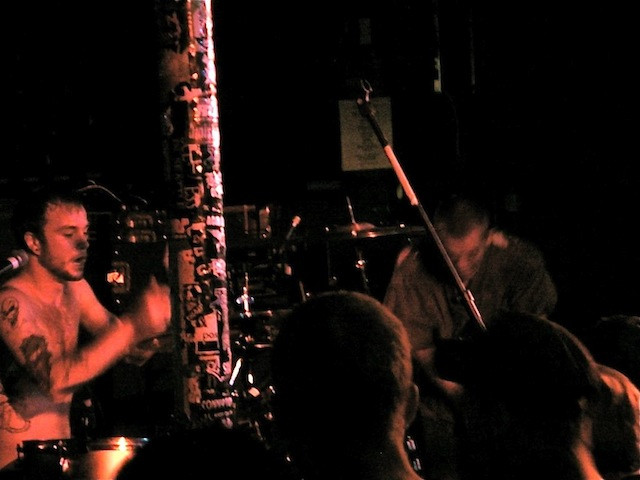 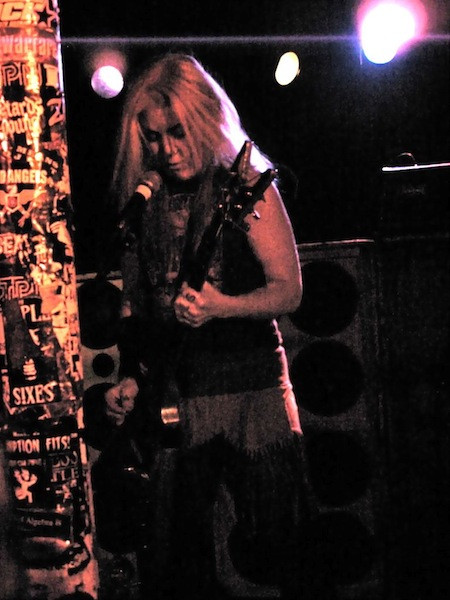 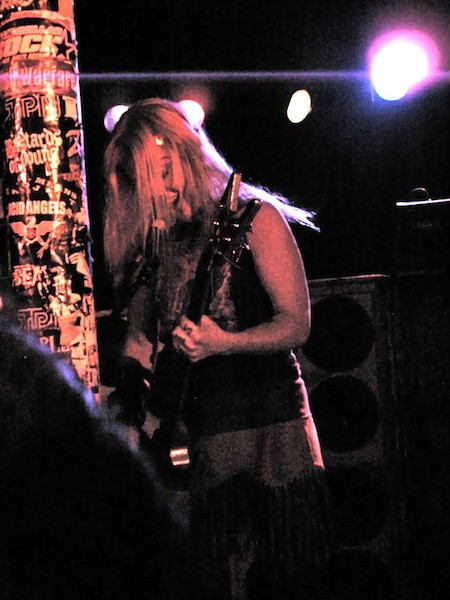 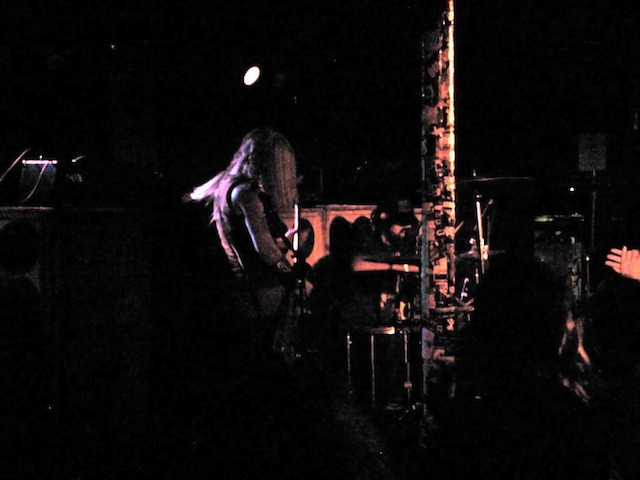 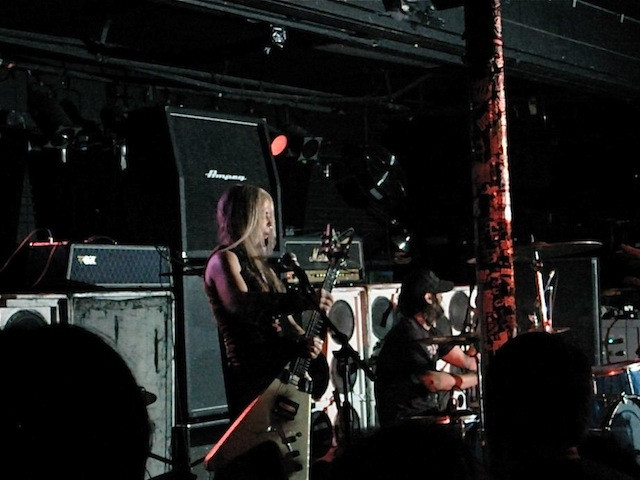 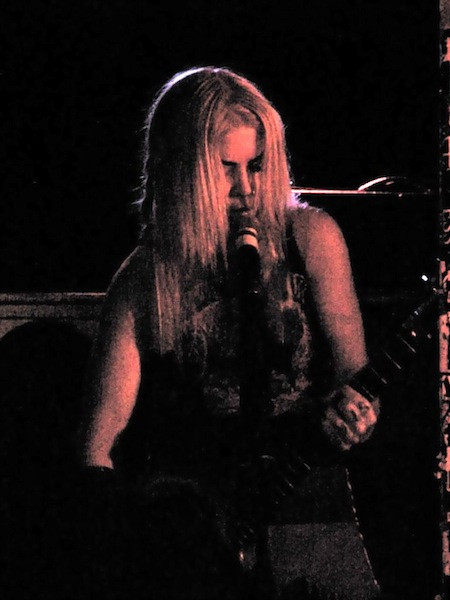 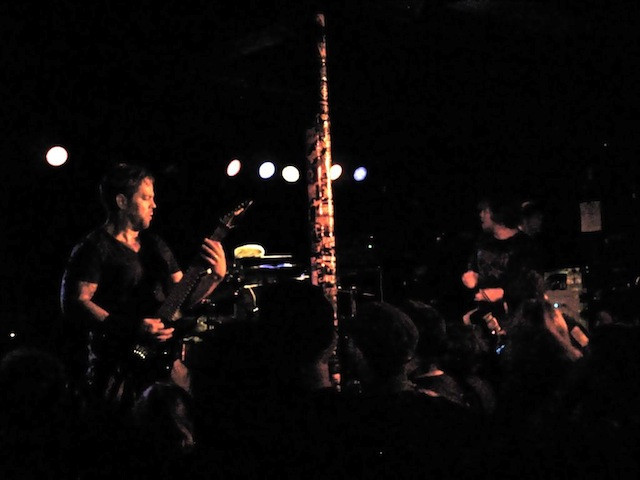 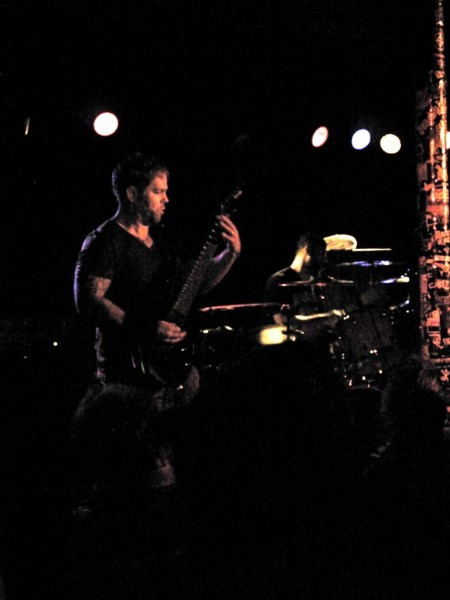 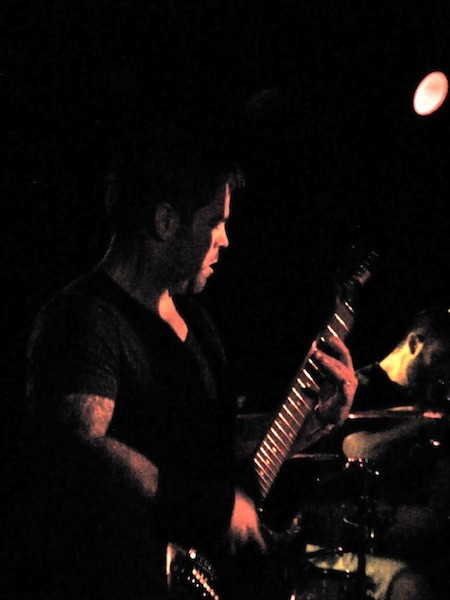 8 Responses to “A GUITAR, DRUMS, AND FUCK ALL ELSE”