This is what we in the biz refer to as FUCKING BRUTAL AS ALL FUCKING FUCK SHIT!

Pathology have the odd factor of being a Victory Records band — a fact that usually would be an omen which instantly communicates to you that the band sucks horribly. But Pathology are no slouches in their craft, having trained in a blood-soaked monastery like Shaolin monks, mastering the art of something that can only be referred to as “The Brutal Way”: Learning how to punch massive gaping holes through the stomachs of their opponents via trudging grooves, severing the arteries of their enemies with fierce technical riffage and fast tremolo picking sections, mastering the art of crushing their opponents’ skulls so violently, with the most massive of slams, that their eyeballs pop out.

Pathology have, however, channeled their own sound on their new album, Awaken To The Suffering. I always viewed them as a death metal band, shamelessly following the Suffocation school of thought, something for which they were never faulted despite that obvious shamelessness. They were quite good before, but this album is something else. The biggest change from before to now is the addition of a new vocalist. Jonathan Huber IS the sound of blood being gurgled in the mouth of the most vile of monsters. You can’t understand a fucking word the man says, but if you give a shit about that you’ve ENTIRELY missed the point. He brings that final dose of menace and “OH SHIT!” to the mix.

The other huge change is the abandonment of the band’s more mid-90’s flavoring in favor of a more modern, extremely slam-heavy direction. That change has given Pathology a more defined and distinctive identity; they stand out more to me now then they did before.

On this album, you’ll find only two modes of experience: Either you’re being sonically eviscerated by a phalanx of distorted nail guns or you’re being crushed by slamming tombstones of ancient stone taken from the most decrepit and decayed of graveyards. The riffs are massive. They’re brutal, atonal, and angular — superb. The drums are junky sounding, the sound of a trash compactor crushing solid matter and breaking down in the process, short-circuiting, losing its artificial life as it attempts to fulfill its only purpose, making cacophonous noise that befits this sonic juggernaut. The massive bass underneath only beefs up the album’s sound even more. And of course Jonathan Huber’s blood gurgles supply the final ingredient to the carnage.

This is a great slam death album. ONE OF THE BEST I’VE EVER HEARD! My last words about this album? 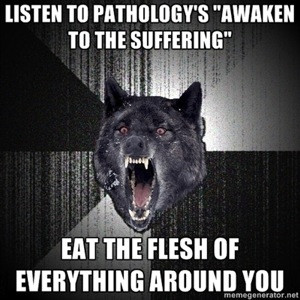 12 Responses to “PATHOLOGY: “AWAKEN TO THE SUFFERING””