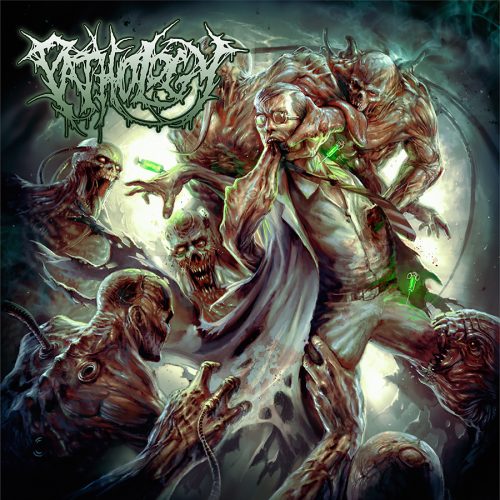 In the annals of brutal death metal, few bands have a profile as large or as indelible as Pathology’s. With nine albums on their resumes since 2006, including their new self-titled one, they essentially followed an annual release schedule until the three years that have now passed since Throne of Reign. Despite the passage of those years, the line-up has remained intact: Dave Astor, the only consistent member of the band since its inception, is still behind the kit; Tim Tiszczenko still wields the axe in a way that dispenses with the need for a bass player; and the beastly Matti Way remains in control of the vocal onslaught. In other words, the triumvirate who reunited with 2013’s Lords of Rephaim are still in harness together.

If you take the long view of Pathology’s career, you could argue that they’ve been marching toward greater degrees of intricacy and stylistic flare within a genre known for its primitive, gore-soaked, head-smashing heaviness, arguably reaching a zenith in their progress with Throne of Reign. And so what has happened in the intervening three years? And could the band’s decision to self-title their new album after that stretch of time be taken as a sign of a re-start or a re-set?

Well, rather than barge into a review of the entire album, let’s just stick to “Shudder” — which is the track we’re premiering today. END_OF_DOCUMENT_TOKEN_TO_BE_REPLACED

It was a pretty intense flood of death metal washing over the metal community, much of it coming from some fairly big names — a hefty collection of mainstays, old guard, and standard-bearers. We tried to collect some of them into our usual three-to-four part series of bands, but eventually it seemed like everyone wanted to get in on the game, and that’s why you have a SEEN AND HEARD headline with five recognizable names within it, all deploying material virtually at once. END_OF_DOCUMENT_TOKEN_TO_BE_REPLACED

END_OF_DOCUMENT_TOKEN_TO_BE_REPLACED 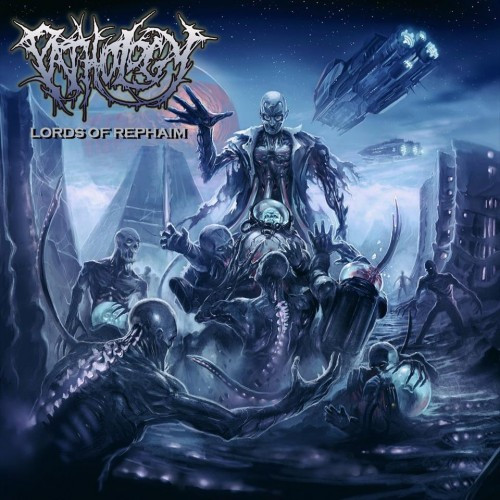 It’s amazing how Pathology have become an insanely reliable source of grotesque slamming sickness.  The last two albums especially boasted an over the top Neanderthal brutalitarian ethic that was quite impressive.  Unfortunately for the band, it seems that after releasing two albums that contained music capable of causing entire civilizations to riot, that previous lineup seems to have imploded — and that’s where Lords of Rephaim comes in.

All that remains are the founding guitarist (Tim Tiszczenko) and drummer (Dave Astor), as well as the return of vocalist Matti Way.  I can see some people being skeptical, and Pathology may be losing some of the fan steam they gained with the last two records, because this is definitely not what earned them their recent boost in popularity.  Lords of Rephaim is chock full of more technical riffs in the style of their older work, leaving the slam in the background to serve as a blunt instrument that breaks open skulls from behind as opposed to the ruthless assault displayed by the Huber-era stuff.

This shit still fucks you up, really hard, I might add, but it’s definitely a more precise as well as faster brand of cranial trauma. END_OF_DOCUMENT_TOKEN_TO_BE_REPLACED

Next, get a load of this new cover art: END_OF_DOCUMENT_TOKEN_TO_BE_REPLACED 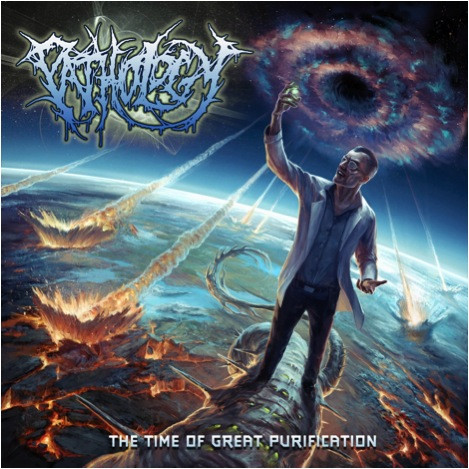 (TheMadIsraeli reviews the new album by San Diego’s Pathology, which is out today on Victory records.)

So yeah, remember these guys?  They released one of the most brutal slam albums ever last year, Awaken to the Suffering?  Yeah.  I reviewed that album (here) cause it ran over waves of children and chopped them up as if it were a blasting, grinding lawn mower in a field of miserable little shits who didn’t deserve to live anyway.  I’m kind of surprised that we’ve already got a new album, but I’m not at all offended because The Time Of Great Purification is as brutal, if not more brutal, than its predecessor.

I think it’s fair to say that Pathology have consistently released quality death metal, but I definitely think the introduction of Jonathan Huber on vocals changed this band for the better.  The music on this album is intensely violent, and if you can believe it, Huber has turned up the roid rage on his vocals even more than before.  Now, instead of a blood-gurgling beast, he sounds like he’s gurgling blood as bile and worms spew out of his mouth and the ground beneath him corrodes and rots away.  It’s fucking mental. END_OF_DOCUMENT_TOKEN_TO_BE_REPLACED 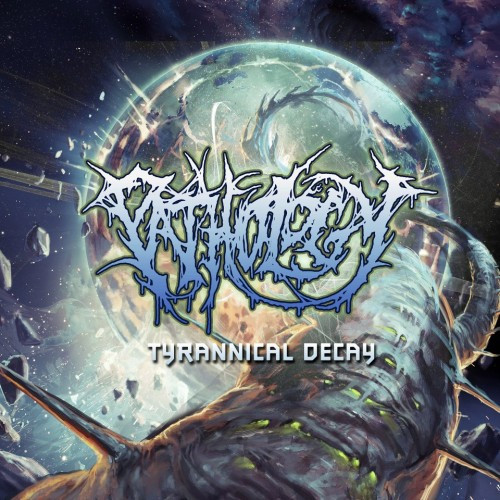 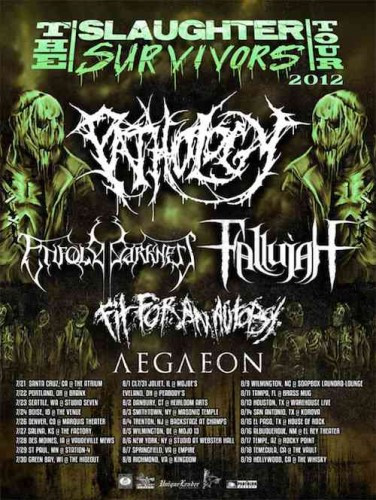 Speaking of which, the schedule is after the jump. END_OF_DOCUMENT_TOKEN_TO_BE_REPLACED

Sometimes in death metal the phrase “simple but effective” isn’t just a description, it’s a way of life. Such is the case with San Diego slamsters Pathology, who have risen from relative obscurity to one of the last bastions for tr00 brutal death metal in the space of just a few albums. Their previous release, last year’s Legacy of the Ancients, was not only their first with a major label (Victory), but was also easily one of the best slam albums since Devourment’s Butcher the Weak, and fans of brutality the world over rejoiced that a band this legitimately heavy was getting some mainstream attention. Or at least I was, I dunno about you guys.

And now here we are approximately one year later, and these bad boys have already done more than their fair share of touring, gone through some lineup changes, and still managed to churn out another slab of slams (try saying that five times fast) in the form of their new full-length Awaken To the Suffering. (more after the jump . . .) END_OF_DOCUMENT_TOKEN_TO_BE_REPLACED

This is what we in the biz refer to as FUCKING BRUTAL AS ALL FUCKING FUCK SHIT! END_OF_DOCUMENT_TOKEN_TO_BE_REPLACED