Sometimes in death metal the phrase “simple but effective” isn’t just a description, it’s a way of life. Such is the case with San Diego slamsters Pathology, who have risen from relative obscurity to one of the last bastions for tr00 brutal death metal in the space of just a few albums. Their previous release, last year’s Legacy of the Ancients, was not only their first with a major label (Victory), but was also easily one of the best slam albums since Devourment’s Butcher the Weak, and fans of brutality the world over rejoiced that a band this legitimately heavy was getting some mainstream attention. Or at least I was, I dunno about you guys.

And now here we are approximately one year later, and these bad boys have already done more than their fair share of touring, gone through some lineup changes, and still managed to churn out another slab of slams (try saying that five times fast) in the form of their new full-length Awaken To the Suffering. (more after the jump . . .) 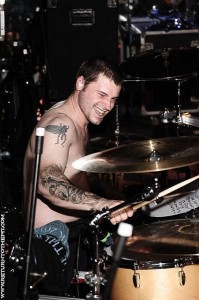 The opening track “Dissected By Righteousness” wastes no time and gets right into it, setting the stage for the whole album with catchy riffs, pounding drums, unintelligible vomiting gutturals and a pretty sweet solo in the latter half. In fact, you could probably apply that description to pretty much the entire album and you’d have a good idea of what to expect. Some might call that formulaic and boring, and such accusations wouldn’t be unjustified, but by doing so they’d miss out on the whole point of the genre. Slam isn’t meant to be groundbreaking (hell, even original), it’s just supposed to be brutal, catchy, and most of all fun, and this is where Pathology’s strength comes from. If this shit doesn’t make your head start bobbing then I don’t know what to tell you, let’s put it that way.

On the other hand, Awaken To the Suffering does stand apart from its predecessors for a few reasons, most obviously the addition of their new vocalist Jonathan Huber (ex-I Declare War). When I first heard that long-time vocalist and underground death metal heavyweight Matti Way had left the band and was being replaced by a guy from a band that I really don’t like much at all, I’ll admit I was skeptical, but I also had faith in Pathology and decided to reserve judgment until the album came out, and boy am I glad I did.

I was expecting generic deathcore growls and screams, but instead was treated to one of the most instantly recognizable vocal styles since that of Cephalotripsy’s Angel Ochoa, and it works just as well with the music as anything Matti did. I can definitely see why people would be turned off by Huber’s puking vocals, ’cause let’s face it, the dude straight up sounds like a toilet (and I mean that in the best possible way of course), but I personally love the fact that you can hear the strain in his voice as he pushes it as far as it can possibly go. It speaks to his enthusiasm for the music, and I find that admirable.

Another previously unexplored avenue on this album is the addition of solos, and pretty good ones at that. The arpeggio sweeps and melodies provide a very nice contrast to the simplistic, sludgy chugging that makes this genre what it is. At several times on Awakening, the music feels as if it’s losing some steam and starting to drag a bit, but then a well-written solo comes in and reinvigorates the whole song. It’s just the shot of adrenaline needed to keep everything going, and it works every time, most notably in “Dissected By Righteousness”, “Media Consumption” and “Opposing Globalization”. 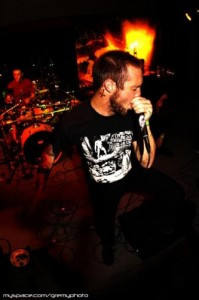 The solos carry the album all the way up to “Emesis”, a superb re-recording from the Age of Onset album, and then everything gets turned completely on its head with the closer “Revocation of Earth”, an early Metallica-esque 70-second clean guitar track. The phrase “like nothing they’ve ever done before” has never been more pertinent than here, because it literally sounds like Cliff Burton coming back to life and playing something that sounds like a variation on the beginning of “Fade To Black”. Clearly the guys in Pathology are keeping an open mind with their brutal death metal, and it’s working in their favor.

Unfortunately, there are a couple of minor setbacks on this album as well. Despite the solos, some of the songs do tend to get a tad monotonous, but that’s a common side effect of just about every slam band on the planet, no use lingering on it. However, the biggest issue I had was that the music has a tendency to get a little too deathcore-y for my taste at times, crossing that thin blurry line from slams to legitimate breakdowns. Heavy, beefy breakdowns yes, but breakdowns nonetheless, and I think I speak for my entire generation when I say we’ve had about as much of those as we can stomach for years now. No lie, the song “Prolonging the Suffering” is nothing but one long breakdown with an uninspiring slow melody thrown in over it a couple times, and it’s an instrumental track, so we’re missing the offsetting effect of Jon’s cool gutturals. But in the long run, these are all trivial nitpickings, nothing that could be considered a deal-breaker.

In the end, what we have is yet another solid offering from a band that only seems to be moving up. It’s not quite as good as their last album, but it’s still undeniably badass through and through. There may be a couple of scattered duds and hiccups along the way, but nobody’s perfect, and Awaken To the Suffering is still well worth your time and money, I assure you. Horns to ya guys, keep waving that slam banner high.

EDITOR’S NOTE: Awaken the Suffering is out now on Victory Records. Pathology’s official site is here. Here’s “Dissected By Righteousness”:

4 Responses to “PATHOLOGY: “AWAKEN TO THE SUFFERING””