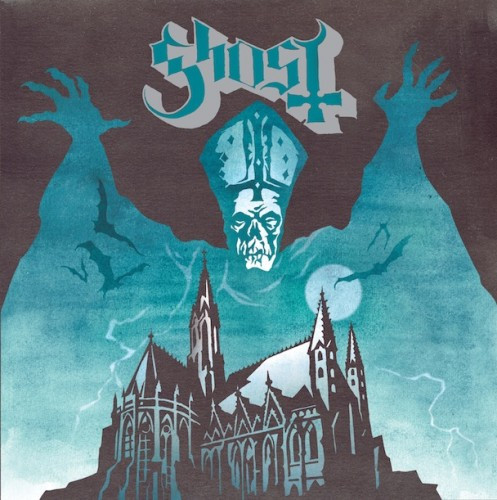 Of course, the similarities stop as soon as the dark, muddy, and unmistakable sound of down-tuned electric guitars greet your ears like a Venus Flytrap snapping up an unsuspecting fly. The culprit, of course, is the second track, “Con Clavi Con Dio”. Whew, talk about a sound (pun intended) sucker punch! Ghost may be a hard rock band, but these bunch of mysterious Swedes are probably the most novel yet extreme, c-l-e-a-n—s-i-n-g-i-n-g act I have seen in recent years. I mean, who the hell sings about Lucifer in a sweet and sappy voice that is reminiscent of pop rock vocals? 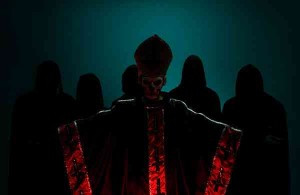 For example, right after the crotch-wetting barrage of riffs at the start of “Con Clavi Con Dio”, the anonymous cult leader of Ghost croons “Lucifeeeeeeeeeer~”, before unabashedly continuing with the sensible follow-up, “… we are hereeeeeee~”, and then—gasp!—“for your praaaaaaaaise.” The straightforwardness of the lyrics is as stunningly cringe-worthy as the music can get, and yet the sheer malice behind the apparent motive of writing in such an appealing style sends chills down your spine, freezes your coccyx, shatters it, and makes it utterly torturous to take a dump after reading that Ghost “have decided to use the ever so popular rock music medium as a way to achieve their ends.”

By “their ends”, they mean spreading the socially-unacceptable Word of the Satanic Gospel to the masses, and mark my words, if they ever trick any mainstream radio station into giving them some airtime, the downfall of morally righteous society will begin. Imagine the sight of teenaged, indie rock gals swaying to “Death Knell”, unsuspectingly chanting along to nefarious lines like “Six six six, evoke the king of hell” and “Sex sex sex, receive the beast of evil”. Let’s put it this way, if 30 years of mostly hard-hitting, growling/shrieking black metal didn’t convince humanity that Satan is the one for us, well… it shows that a different approach is needed for the Dark One to really get through to us just how awesome he is compared to Jesus! And Ghost have most certainly taken the first step in this benevolently malevolent mission.

Intelligently packaged as a seemingly innocuous and extremely accessible record, Opus Eponymous is the latest secret weapon of Satanic music, and a vile aural concoction of addictive pop-influenced hard rock numbers that is sure to get many young and weak minds corrupted. Standout sermons include “Con Clavi Con Dio”, “Ritual” and “Death Knell”.

Come, fellow new followers: Let us lose ourselves in the lush soundscapes of this sinful yet irresistibly sappy masterpiece of the Devil’s latest breed of insidiously clever preachers.