(ElvisShotJFK, a long-term member of the NCS community, provides this guest review of the new album by Iced Earth.)

Iced Earth and bands like them aren’t exactly material that’s usually covered here at NCS, but when Islander made a post about the band streaming the title track from their latest album (here), it seemed to generate some interest, along with discussion over what kind of metal Iced Earth plays. To that end, I would say that they are a breed of power metal that leans more towards thrash than progressive metal, as many of the band’s peers (most of them European) tend to do. While they aren’t immune to some of the trappings of the genre (the cheese, the flash), they deliver an aggressive, tight, galloping metal that borrows from the likes of Iron Maiden and Judas Priest without being too blatant.

Over the past 20 years or so, Iced Earth have gone through many line-up changes, founder and rhythm guitarist Jon Schaffer being the sole remaining original member. However, as with most bands, it is the changing of singers that has been more notable – not to take anything away from the rest of the guys, who’ve also been in the ranks of Testament, Megadeth and Futures End, among others. Though he was the third singer (after Gene Adam and John Greely), Matt Barlow became the de facto voice of Iced Earth, a powerful singer who was as impressive (if not more so) live as in the studio.

After the terrorist attacks in September of 2001, Barlow wanted to leave the band and pursue a career in law enforcement, but was talked out of it, Horror Show and Tribute To The Gods being the last of his output before being granted his release during the recordings for The Glorious Burden; he didn’t seem to have the passion for music anymore. 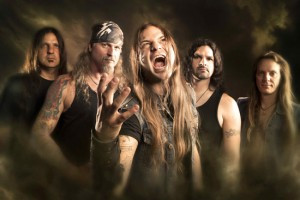 After being replaced in Judas Priest by the living legend he had replaced (that would be Rob Halford), Tim “The Ripper” Owens joined Iced Earth. As great a vocalist as he is, he didn’t always fit with Iced Earth’s material. Iced Earth sounded different, something which turned away many fans as the band went forward. Matt Barlow wound up having a change of heart about singing and was welcomed back into the band, making it the second time Tim was replaced by the guy he replaced. Personally, I thought it came at the wrong time, as Iced Earth was in the middle of their two-album set, which continued with the story of Set Aboninae that started with Something Wicked This Way Comes.

So, why did I just take the time to go over some of Iced Earth’s history? Well, they’ve gone through another change. Barlow once again decided to leave, this time to focus on his family, which he felt he would be unable to do with Iced Earth’s planned touring schedule. To his credit, he stuck around and went on tour with the band, giving them enough time to find a suitable replacement.

In the meantime, Iced Earth re-signed with Century Media, who were home for the band up until The Glorious Burden. Considering that the first Iced Earth album was released 20 years ago, the homecoming makes sense, and fortunately it seems that whatever bad blood there may have been between the two camps has long since been washed away.

Iced Earth’s new voice comes in the form of Stu Block, also of Into Eternity. The first offering with his vocals was a re-recording of “Dante’s Inferno”, a song whose only live appearance up to now was in Greece for Iced Earth’s awesome Alive In Athens. That version of the song kicked so much ass, I don’t think there’s anything the band can do to match it, but they’re going to play it live again. Still, it showed some promise as to what Stu could do with the band, and I waited to hear the first material from the new album, in this case the titular track. 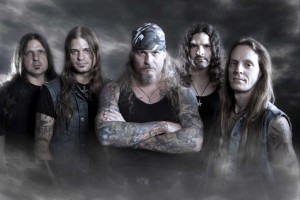 Inspired by dystopian movies and themes and bookended by songs that deal with the ‘Something Wicked’ storyline with Set Abominae, Dystopia serves as the opening salvo for Iced Earth’s third decade.

Longtime fans should be pleased to hear that Stu Block doesn’t sound radically different from Matt Barlow, so the transition to him shouldn’t be as hard as the transition to Tim Owens was. That brings up another point about Stu Block’s vocals – he can also hit the Halford-like highs and screams like Owens. For the most part, Block sticks to the low end, occassionally digging a little deeper for a hint of a growl. The upper end of his range is used sparingly, but brought out enough to add some flavor to the songs without being overpowering. This puts Iced Earth in a position to embrace everything they’ve done in the past without too much effort. Maybe after this, Block can separate himself a bit from the vocals of Barlow and Owens, but it’s nice to hear that he’s able to do what they could do in the band.

It took a couple listens to warm up to the rest of Dystopia (which for me has been the case with Iced Earth in the past, too), but it didn’t take long to find the other good stuff. Title track aside, “Anthem” is a clear highlight that plays to the album’s dystopian theme and could become a live staple. “Days Of Rage” is a monster of a song, albeit far too brief. Had it been a bit longer and without the crap at the end as the music fades, it could have eclipsed everything else on the album. “Dark City” is another killer tune that makes use of a lot of the elements that Iced Earth has perfected over the years.

Not everything is top notch, though. “Anguish Of Youth” doesn’t quite reach what the band is capable of, while “End Of Innocence” would make for a decent song for another band, but for Iced Earth it’s more like filler. Album closer “Tragedy And Triumph” also sounds out of place, a bit too cheerful in comparison to the rest of the album. Granted, it’s a seemingly positive ‘end’ to the Set Abominae story, so that’s part of it. That said, I doubt this is the last we’ve heard about The Watcher, even if this is truly the end of the story (I’m not so sure that it is). Fortunately, most of Dsytopia is on par with the rest of Iced Earth’s library, so it doesn’t feel too much like a transitional album. 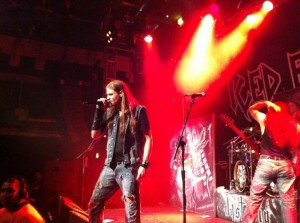 The limited edition features three additional tracks, plus a foldout poster and sticker found in the back sleeve of the digipak. One of them is a ‘string’ version of “Anthem” placed at the end of the CD. Even playing the two versions back to back, I can’t really hear any difference between them (and I’ve played it on a couple different computers, a CD player, listened through speakers, headphones and earbuds), save for a bit in the chorus’ background. I have to think that this extra is an afterthought with very subtle differences, and it’s not the reason to get this version of the album.

The other two tracks are placed before “Tragedy And Triumph”, which is a bit of a surprise, although it’s not the first time an album has had different track orders, nor is it the only metal album to do so this year (see Symphony X’s Iconoclast). “Iron Will” is a decent song, but it’s the first of the extra tracks that steals the show.

“Soylent Green” is quite possibly the best song on the album, and it’s unfortunate that not everyone who gets Dystopia will hear the song, but this is the reason to spring for the limited edition. If you haven’t seen the movie starring Guns N’ Moses, the song will pretty much spoil the whole thing for you in the first verse, even without the clever wordplay (which may not be intentional). Then again, a certain quote from the movie is well known, so it probably doesn’t matter much that the song serves as a spoiler.

This is easily one of the best tracks I’ve heard from Iced Earth and I would hope that they play this one live. It fits the theme of the album and I think it should’ve been part of the album proper; it wouldn’t take away from what Iced Earth did with the ‘Something Wicked’ storyline. Besides, they have homages to Equilibrium, V For Vendetta and Dark City, so why not have one for Soylent Green as well? 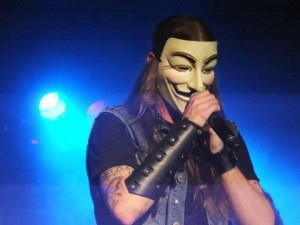 Overall, Dystopia is a pretty good album that should appeal to longtime fans and newcomers alike. It may not be for everyone; those who only care for the more extreme metal bands probably aren’t going to like it, no matter what. Iced Earth sounds like they’re supposed to, and that’s good enough. Ten studio albums (of original material, that is) and over twenty years in, there’s no good reason to take a detour now. Not every band can make sudden changes in sound, and I don’t think Iced Earth would work as well if they tried.

EDITOR’S NOTE: Dystopia is out now on Century Media.  Iced Earth has an official web site here, and their Facebook page can be found via this link.