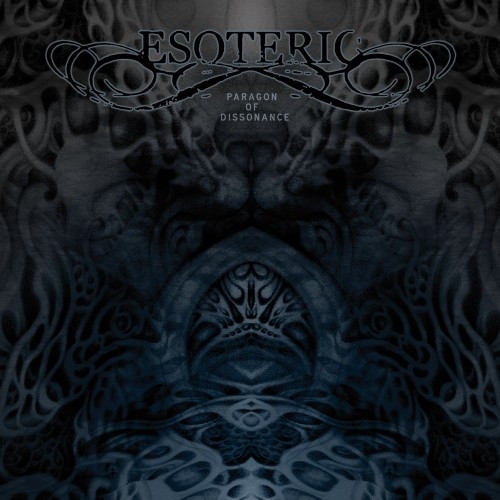 Metal album names rarely seek to describe the sound of the music that lies within. The name of Esoteric’s new album comes close. Much of the music on the album is indeed a paragon of dissonance. But what is not dissonant on the album, juxtaposed with what is, is what makes the music so remarkable.

In dominant form on most of the songs is the aural equivalent of a planetary catastrophe, something akin to the Chicxulub asteroid that impacted the Yucatan peninsula roughly 65 million years ago and killed off an unfathomable numbers of species, including (probably) most dinosaurs. Titanic distorted riffs are accompanied by screeching psychedelic noise to produce an overwhelmingly bleak panorama — the pounding of protesting life back into primordial ooze by a downpour of anvils from above.

Nearly as slow-paced as funeral doom, the songs paint a picture of the inexorable eradication of light and life, and the truly harrowing vocals (a combination of gruesome abyssal roars and the kind of abraded, hair-raising shrieks more common to black metal) cement the feeling of impending extinction.

If this were all that the songs achieved, kudos would still be due, because the music so excellently embodies the power of doom metal, especially when it’s layered with stylistic borrowings from death- and black metal. But we come back to what is not dissonant . . . 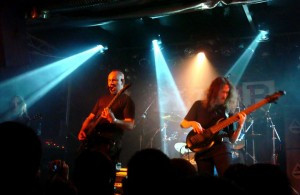 Somehow, Esoteric have made the massive onslaughts of black cacophony into . . . songs, with melodies that resonate in the mind. But the melodies aren’t simply embroidery, like a clever working of gold thread on a very dark tapestry. Instead, the music resembles a single organism — two very different manifestations of life grown from a common root, like the blossoming of pale roses within a dense mass of black thorns.

The blossoming of melody is perhaps most pronounced in the grand, extended ambient intros to “Non Being” and “Disconsolate”, but it’s really ever-present, with subtle, shimmering guitar leads appearing when you least expect them or minor-key dirges taking center stage in between squalls of down-tuned riffing.

As I listened to these ingenious songs, I was sucked into a whirlpool of roaring noise, pulled downward irresistibly into a black maw of slamming rhythms and shrieking mayhem that blotted out all else that was happening around me. Yet when the songs were finished, I found myself re-tracking in my head those infectious and often sublime melodies that were down in the core of the songs all along.

Scientists speculate that when the Chicxulub asteroid struck Earth, the impact was so extraordinary that huge asteroid fragments were ejected upwards back into space — and then descended again in a rain of fire that burned the planet. In those last moments, the sights in the sky must have been beautiful. Successfully combining moments of horror and moments of mournful beauty, both soul-rending and soul-enriching and completely enthralling at all times, Paragon of Dissonance is like nothing else I’ve heard this year. It’s also one of the most accomplished albums of 2011.

Paragon of Dissonance is Esoteric’s sixth album and it’s being released today by Season of Mist in Europe and next Tuesday (Nov 15) in the U.S.  It’s available for order at the SoS site (here). In physical form, the album will be released as two CDs, totaling seven long songs. Here’s one of them, called “Cipher”, which happens to be available for free download from the Season of Mist site linked above:

And in case that whets your appetite for more, the entire album is now streaming at the KAAOSzine web site (here).

P.S. Just in case anyone infers from this review that I made up the whole vacation thing, I really am on vacation — still. I just happened to be farting around briefly on the interwebz yesterday and discovered that album stream, and then discovered that Season of Mist had kindly provided a promo of Paragon that I had neglected.

Then, in one of those pleasing twists of fate, my non-metalhead wife decided to embark on an multi-hour excursion of her own, leaving me to my own devices, which consisted of becoming fully hypnotized by this album, followed by a bout of pounding the keyboard until this review emerged.

I am now returning to cloudland. Enjoy the rest of your fucking day.

12 Responses to “ESOTERIC: “PARAGON OF DISSONANCE””