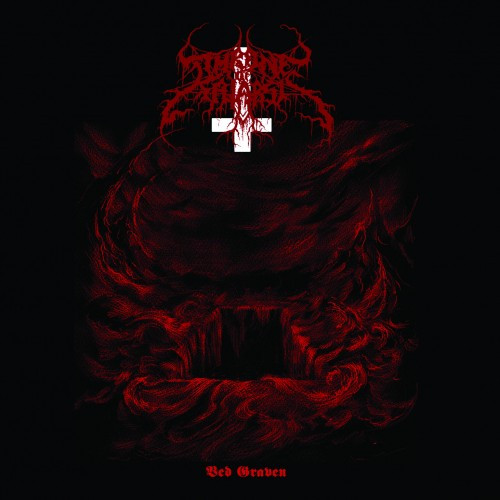 (NCS guest contributor Trollfiend emerges again from his lair to provide this review of Ved Graven, the new album by Throne of Katarsis.)

Like a lot of people, I reacted pretty negatively toward Sasha Frere-Jones’ piece on black metal in The New Yorker magazine (featured at NCS here).  However, upon reflection, I have decided that he was just examining something he knew little about through the lens of The New Yorker‘s oeuvre, and probably shouldn’t be faulted for that.  So with that in mind, I have decided to review Throne of Katarsis’ new album Ved Graven in a similar vein.

Throne of Katarsis hails from Norway and could be said to embrace the legacy of the so-called “True Norwegian Black Metal” (TNBM) scene in the same way that avant-garde sculptor Naum Gabo embraced the abstract conceptions of Wassily Kandinsky and evolved them, along with the synthetic gemoetries of his older brother Antoine Pevsner, into the perhaps narcissistically coined legacy of Constructivism….though it’s plain to see that their nihilistic worldview borrows an instinctive post-Nietzschian schadenfreude zeitgeist from Heidegger.

The band displays a certain neo-Satanic pageantry that evokes the remarkable dance-dramas of Izumo no Okuni in the Tokugawa shogunate-Edo period of the 1600s, as well as the kumadori stage makeup of Ichiwaka Danjuro from the same time, though one might assume that this style of performance is currently enjoying a downturn in popularity, much like the Saruwaka-machi era of these Japanese dance-dramas. However, the transcendence of these blaspheming iconographies is assured via cathartic self-expulsion; as Descartes tells us, “…something which I thought I was seeing with my eyes is in fact grasped solely by the faculty of judgment which is in my mind.”  I couldn’t agree more.  (more erudition after the jump . . .) 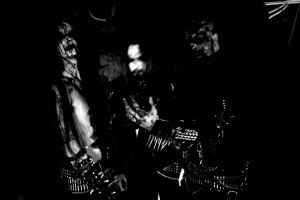 Many of the TNBM-style bands do still indulge in this misanthropic panoply of antitheistic demiurgery, some taking it to an extreme, not unlike the stylings of Thorns, Nachmystium, or Borknagar.  To further expouse this individualistic nihilism (indeed as Oscar Wilde said, “Art is individualism, and individualism is a disturbing and disintegrating force. There lies its immense value. For what it seeks is to disturb monotony of type, slavery of custom, tyranny of habit, and the reduction of man to the level of a machine.”), many engage in a superfluous ritualism of the macabre, such as that mused upon in 1948 London magazine’s interview of prodigal fashion designer Alex Turvey wherein he discusses the influence of local Cornish folklore, citing “the theatrical, macabre, ritualistic and often sexual performances that I witnessed being paraded through the streets of local villages have definitely left their mark on my work.” No doubt Throne of Katarsis’ frontman Infamroth would agree wholeheartedly with this young and idealistic designer’s outlook on the creative process; they are of a kindred spirit in the vast benighted realm of artistic expression.

In closing, I would like to state that I believe I have given you a concise and understandable glimpse into the dark and unknown world of black metal; however, if you find that you are struggling with some of these concepts as I have laid them out for you, all I can say is that as the explicit definition of writing styles is not obvious, I propose an unsupervised clustering procedure that estimates Gaussian mixture models for writing styles in a completely datadriven manner and thus implicitly establishes classes of writing styles. On a challenging writer-independent unconstrained stylistic recognition task my two stage recognition approach – first performing a writing style classification and then using a style-specific writing model for decoding – achieves superior performance compared to a single style-independent baseline system (according to Gernot A. Fink). So clearly it is a result of your cataclysmic lack of appropriate education and not the fault of my plain and humble prose at all.

EDITOR’S NOTE: Ved Graven was released by Candlelight Records on November 1. Having read Trollfiend’s review, you will of course know immediately whether the album is likely to appeal to your tastes, and whether your time will be well-spent stalking Throne of Katarsis over the byways of the internet, a journey that you can begin through their Facebook page.

Indeed, so vividly descriptive is Trollfiend’s prose that actually listening to the music would be a completely superfluous experience. Nevertheless, for the sake of completeness in the historical record, given the inevitability of our own deaths but the immortality of NCS as an immutable cache of deathless bits, we offer this song from Ved Graven: