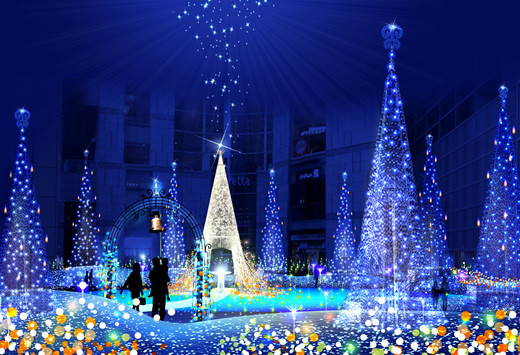 (Posting Phro’s Christmas hallucinations is becoming an annual tradition, it seems.  What?  You think it’s too early?  Do you really want to be reading this during the holidays?  Just take a guess what Phro is describing here:  “It arched through the air in a sparkling, rainbow stream of a million pearls.  Each drop glittered in the pale light, reflecting and refracting like snowflakes shining in headlights.  It was like watching the Milky Way being born.”)

The song echoed through the chilly night air like hyenas’ cackles slowly raping quiet desert serenity.  I could tell from the puddle of bloody vomit that I was lying in that tonight had not been a good night.  And I could also tell from the riot police beating my head that it probably wouldn’t end well either.

The Tokyo riot police are specially trained to deal with large groups like demonstrations or what have you.  Luckily for me, they don’t carry guns.  Unluckily for me, they’re pretty fucking tough and very well trained.  They’re not supposed to go ape shit and just beat the fuck outta offenders—but I guess I just bring out the best in people.  (If you’re interested in some of the training they undergo, check out Angry White Pajamas about an American poet’s adventures in their year-long Aikido course.)

Through swollen eyes,  just before passing out, I admired the cum-covered glory that I had spread about the Ueno Park Christmas illumination display.

Now, you’re probably thinking this was just another boring Phro-got-drunk-on-whiskey-and-rubbing-alcohol adventure.  But you’re wrong!  Well, okay, a little wrong.  First off, I hadn’t had any rubbing alcohol, and I was only slightly buzzed.  Second, it wasn’t my fault.  Really!!!  It was… 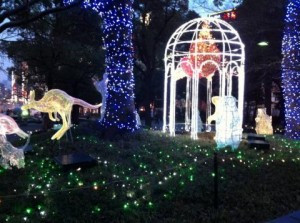 Whatever, the plot calls for a change of scene and an explanation I cannot provide, and you want to see how I get manipulated by the Fucktopus like a hand puppet.  Let’s get this shit rolling down hill.

So, it was a cold and slightly blustery December evening.  I had a night to kill by myself, so I went for Chinese.  There’s a place in Ueno, right next to the park, where the pot stickers are massive.  They’re literally the girth of a averagely endowed man’s cock.  (I’m guessing a little…maybe y’all can measure and we can add and divide and figure out the average in the comment section.)  Not quite as long, but all the hookers tell me it’s not how big it is, it’s how much money is in the wallet.  (I’m a disappointment no matter how you cut it.  Please don’t cut it.)

Where was I?  Right, Chinese food.  After eating by myself like a sad sack of sad sacks quietly pretending to be waiting for someone, I decided to go for a walk in the park.

Now, if you’ve never been to Ueno Park, it’s a pretty nice break from the rest of Tokyo.  Even the homeless guys are nicer about trying to rape you.  (They go for the honorific form of “You sure got a pretty anus, white boy,” instead of the colloquial.  Kinda makes you wanna tip them or something.)

Anyway, the cold was keeping the homeless rape bums at bay, and the dreamy-eyed couples were all at Tokyo Tower pretending their love was special.  (Should love be plural in that sentence?  Gah, fuck you, Grammar.  I wish metaphysical poets had written sonnets about how Grammar is an ugly jerkface who fucks with your head like a shitty ventriloquist.)  So, it started well enough. 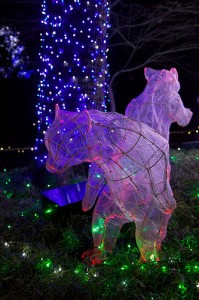 Rather than walking directly through the illumination display, which I knew would invariably have some penguins and pandas doing things that only penguins and pandas can do and get away with because they’re cute, I decided to stop by the lake.  “Lake” is probably too big of a word to use here.  “Over-sized pond” is probably better.  It’s bigger than a swimming pool, it has water, and there are pigeons.  That’s what I’m trying to say.

You know how in horror movies, when the evil, creepy, fucked-up-looking monster comes out of a body of water, one of the guys who’s gonna die early always throws a beer can in a lake?  But instead of sinking, it bounces off something (like the monster’s head) and then sinks into the lake?  Well, nothing like that happened.  Instead, I took a piss in the lake.  Okay, I admit, that was kind of a shitty thing to do.  But where do you think all the fish piss????  I mean, come on, let’s have some perspective here!  It’s not like I rounded up a bunch of random people, force fed them Taco Bell and coffee, and then gave them one tiny gallon bucket to shit in.

Anyway, after letting Constellation Urine fly (you know you loved Apollo 13), I decided to check out the illumination display, but before I got a few steps forward, I felt something wrap itself around my leg.  It was wet and sticky.  At first, I assumed it was just another bum and tried shaking it off.  Then it grew tighter, and I looked down.

“Oh, fuck me with a fuckstick of shit.”

I screamed.  No, I didn’t shout, holler, or yell.  I farted so hard it burned and screamed like a 5 year old girl walking in on Santa Claus having sex with her dad.  The tentacle started pulling, and I fell on my face like an old Charlie Chaplin movie.  I kicked and cried and pounded my fists on everything.  I felt like a 6-year old again.  Then I felt another tentacle work its way up my leg and start to fumble with my zipper.  At that point, I felt 5 again.

The tentacles were warm and gooey.  A little squishy, but with a firmness to them that was undeniable.  You probably think I’m trying to make them sound like massive, angry cocks.  But I’m not.  They were more like old, moldy sponges that had gotten a little stiff.  I could feel the pond water and tentacle slime dribbling down my leg and pooling in that area behind my knee.  It was…unpleasant.

I realized that I wasn’t being dragged to the pond so much as my pants were…being pulled off.  I looked around hastily for the rape bums.  At first, I was glad not to see any around, but then I started to wonder– 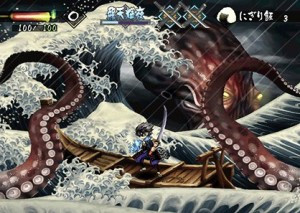 I blacked out.  (You might think I’m being a lazy writer trying to avoid coming up with a better segue, but, seriously, you try not blacking out when a 5 inch diameter hatentacle (hate tentacle) crawls up your ass and attached itself to your brain stem.)

I awoke about 6 feet in the air.  There was a pulsating, thrusting feeling in my bunghole, but it was numb from blood-loss, so I guess I should have been happy about that.  My arms were waving around like a little cubscout running in circles and screaming after his jacket caught fire when he leaned in towards the campfire.  I wondered why they were doing that.  I asked them to stop.

I politely requested they stop that silly action at once.

They continued to ignore me.

Then, I told them to knock that shit off or I’d make them stranger me for two days straight.

My right hand slapped me in the face.  Then, my left hand poked me in the eye.  Assholes.

Through groggy and slightly swollen eyes, I looked around.  The tentacle was still up my ass.  I was pretty sure that’s not where it was supposed to be…but the whole floating thing was kinda cool, so I decided to set that aside for the moment.  Suddenly, a panda leapt at me.

It wasn’t, of course, actually a panda.  Pandas leap about as well as they make babies.  (They need instructional videos, eggnog, and twelve-pound pills of Viagra each.  Making babies is even worse.)  Rather, it was one of the animal light things that were part of the illumination display.  Looking down, I finally saw one of the rape bums.  He was cackling like a little kid who’d just learned that punching the big people in their special area made them fall down and cry.  (That little kid went on to write and direct most of Jim Carrey’s movies. Except Eternal Sunshine of the Spotless Mind, that was directed by an android who tried to divide by zero and square -1 at the same time.) 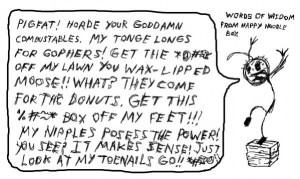 My arms promptly gave the bum two one-finger salutes.  And then I sprayed acid out of my nipples and the rape bum melted like the Wicked Witch of the West.  Of course, having acid erupt out of your nipples doesn’t feel too good either, so I started crying for my mommy.  My right hand reached up and slapped me again.

Then, I felt something…moving in my pelvic area.  It was…kinda…pushing around…like it was searching for something.  I felt it dig around until it found a testicle.  It was like my lower intestines had turned into riot grrls, put on some steel toed boots, and kicked me in the balls for being a sexist pig.  (Could you blame them?)  If I’d been standing, I certainly would have fallen to my knees.  Instead, the probing thing backed up, and then surged forward again.  It attached itself to my penis’s cum tube.  (I’m assuming that’s what happened, though I do have to admit that I’m not really that well versed in human anatomy.  The part between the nut sack and the tentacle/poop hole is the chode, right?)

It arched through the air in a sparkling, rainbow stream of a million pearls.  Each drop glittered in the pale light, reflecting and refracting like snowflakes shining in headlights.  It was like watching the Milky Way being born.  I could almost see the DNA in each glimmering jewel, the accumulated information of billions of years of evolution from star dust to humanoid.

It was actually much more satisfying than I’d expected it to be watching that off-white, vaguely-yellowish-green goo splash all over the illumination display.  I almost wanted to sing “White Christmas”. 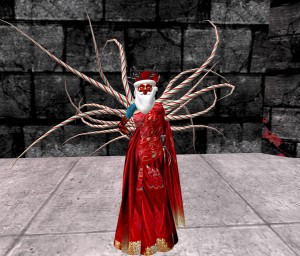 The sound of marching, however, stopped me.  I turned my head to see the Tokyo Riot Police marching up through park entrance.  Who the hell had called them?  The rape bums didn’t have phones.  But, before I could think of something witty to say, I found myself again face-first on the cement.  The tentacle had released its death-grip on my brainstem and slithered back to the pond, a good 200 yards way.  How long had that fucking thing been???

I was ecstatic that my arms and legs now did what I told them do to do, so I decided to celebrate by standing up.  Which was a bad idea, since I did so just as the first police officer reached me.  As I flew up-side down and backwards through the air, I caught a glimpse of three young, Japanese girls wearing black and red school girl outfits giggling.

“Chommatte!” They giggled at me.  “Merry Christmas!”

My head bounced off the ground.

7 Responses to “ANOTHER FUCKING CHRISTMAS STORY”