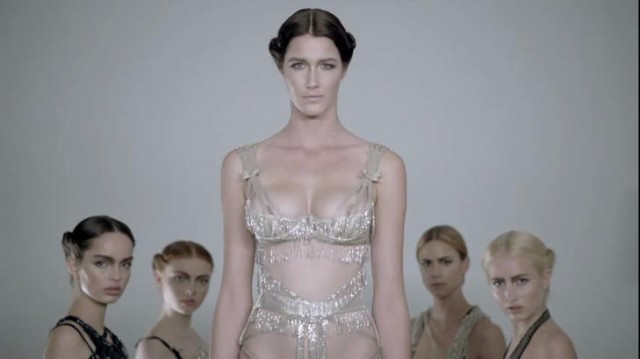 Are you like me? When you watch lingerie ads, do you wish there were a death metal sound track? I thought so. I mean, doesn’t everyone wish for that? Well, Agent Provocateur has made your fondest dreams come true.

Agent Provocateur is a UK-based maker of high-end lingerie. And by high-end, I don’t mean the kind of butts that defy gravity. I mean the kind of lingerie made for people with more money than sense. Agent Provocateur’s latest line of undergarments, with an S&M flair, is called Soiree. To promote these look-good, feel-good undergarments, the company made a promotional video that’s kind of a horror-movie take-off, that is, if you find supermodels feasting on each other scary.

The video was directed by a guy named Justin Anderson, working with Agent Provocateur’s Creative Director, Sarah Shotton. According to Justin, “Putting Agent Provocateur and horror together seemed the natural direction for the collection, but we needed a music track that would add a layer of humour.  Sarah came up with the idea of using a Death Metal track which would be perfect for the brief, and I promised her I would make a film that would be like listening to Slayer whilst reading Italian Vogue.”

Wow. It’s like Justin has been stalking and surveilling me. How did he know that I like nothing better than listening to Slayer while reading Italian Vogue? I mean, it’s like having bacon with your cheeseburger. In this case, Justin went with a Parisian-based band called Omaha Bitch. Watch the ad after the jump (for those watching this in a public place, there’s bare boobage in the vid . . .).

Did that scare you? Did it tickle your nether parts? Did it just strike you as weird? Did it make you curious about Omaha Bitch?

Well now, if you haven’t gotten enough boobage or enough Omaha Bitch, I found this video. This is my kind of war movie.